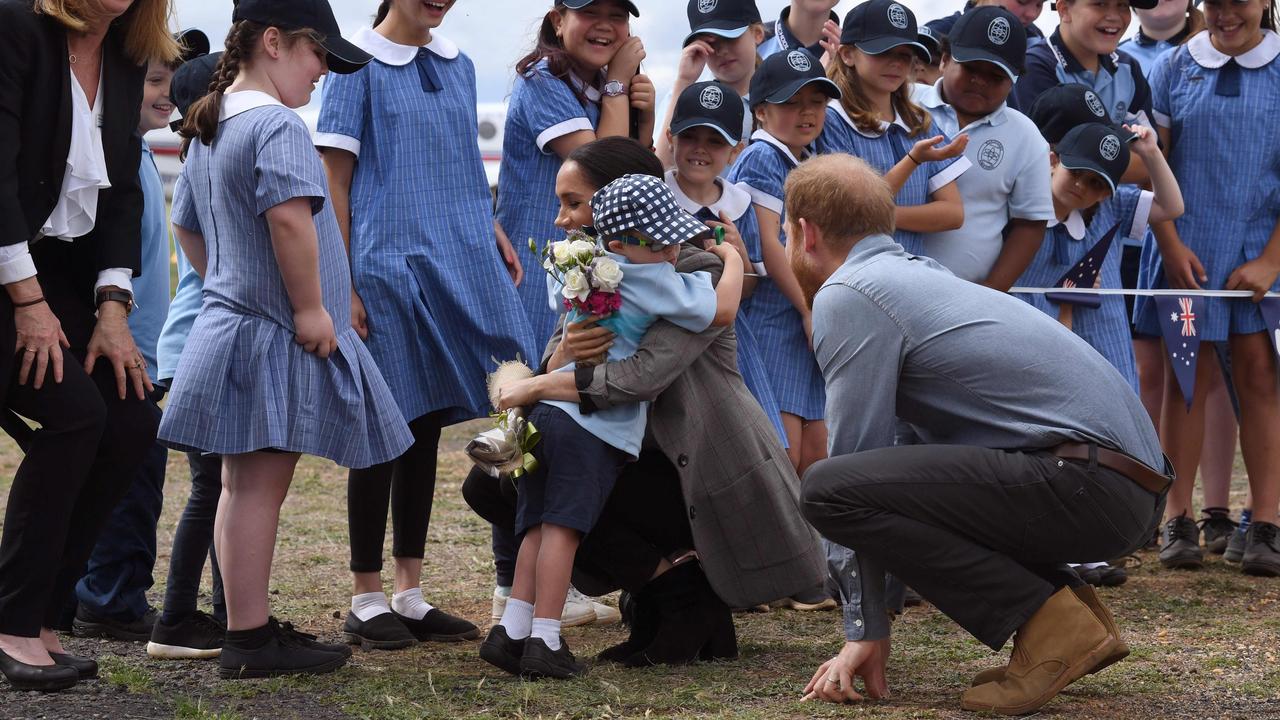 Prince Harry (R) looks on as his wife Meghan, the Duchess of Sussex, is hugged by student Luke Vincent of Buninyong Public School following the couple's arrival at Dubbo Regional Airport in Dubbo on October 17, 2018. Picture: AFP

The Duke and Duchess of Sussex have patted koalas, travelled on a Melbourne tram and walked among the crowds of fans who gathered to catch a glimpse* of these glamorous* royals on their Australian tour this week. The Duke and Duchess of Sussex on a tram in Melbourne on Thursday with Melbourne schoolchildren. Picture: AAP

But they’re not here on holiday. They’re working. In just over a week in New South Wales, Queensland and Victoria they will attend 36 official engagements* as part of an itinerary* designed to draw attention to important issues Prince Harry and Meghan would like us to think more about.

Here are some of the big issues the royal tour has highlighted*.

The couple went to Dubbo, in NSW and visited the Woodley’s farm and helped feed their cattle. Meghan baked banana bread to share with the family. Prince Harry and Meghan, the Duchess of Sussex talk with the Woodley family about drought. Picture: AFP

In Dubbo they had a barbecue with 30,000 locals in the town park and met volunteers, including those who help charity Drought Angels. It rained during the barbecue.

Prince Harry made a speech and joked that he had brought the rain as a gift, referring to the reason they were there: drought and the long-term stress* it puts farmers and others in rural communities under. Prince Harry speaks to the Dubbo community as his wife Meghan, Duchess of Sussex holds an umbrella under heavy rain at Dubbo on Wednesday. Picture: AFP

All of NSW, much of Queensland and parts of Victoria and South Australia is in drought, which means farmers have difficulty keeping their animals alive, growing crops, making an income and looking after their land. Drought effects everyone in rural communities as small businesses struggle and people have trouble finding work.

Prince Harry talked about the importance of asking for help when your mental health* suffers.

“All you need to do is to ask for it. Ask your neighbour, your peer*, your fellow farmer is literally* right around the corner,” he said.

“Chances are they may well be suffering too and will relish* the opportunity to either listen or talk themselves.

One of the most-watched videos of the royal tour is of 5-year-old Luke Vincent’s hugs for Prince Harry and Meghan when they met locals at Dubbo.

They learned how important this lifesaving service is to people living in remote Australia.

Doctor William Ibbotson told AAP that the Royal visit would boost the profile* of the RFDS, which relies on donations to continue its services. CONSERVATION
Prince Harry and Meghan opened the new Taronga Institute of Science and Learning at Taronga Zoo in Sydney.

We all love a visit to the zoo, but when the Duke and Duchess go, they draw attention to the work the zoo is doing for wildlife conservation.

Like zoos all around Australia, Taronga has moved from the old-fashioned approach of showing exotic animals for entertainment to education and conservation. Australian zoos teach visitors about how to look after the environment and the importance of preserving habitat for wildlife. Zoo breeding programs for endangered animals help keep many species from extinction. The royal couple meet a koala named Ruby and its koala joey named Meghan, after the Duchess of Sussex, during a visit to Taronga Zoo in Sydney on Tuesday. Picture: AFP WOMEN’S SPORT AND FITNESS
The Duchess knows how to handball an Aussie footy, passing a Sherrin* to girls from This Girl Can VIC while in Melbourne. The program celebrates and encourages active women and girls of all shapes, sizes and levels of ability.

The couple were greeted by more than 150 women playing football, netball, cricket and a range of sports on the lawns of Victoria’s Government House. There were also women doing yoga, boxing, cycling and a dance-based exercise activity called Zumba.

Prince Harry talked to two women playing AFL, but while he handled the Sherrin, he didn’t test out his handball or kicking skills. Meghan, the Duchess of Sussex handballs an Australian Rules football in Melbourne on Thursday. Picture: AAP

ETHICAL* CLOTHING
Everything Meghan wears is photographed, talked about and instantly bought by many women around the world who like to follow her style. It’s called the “Meghan effect”. On her visit to Dubbo, Meghan wore a pair of black jeans by a Queensland company. The jeans are made by women in Cambodia. By getting a good job sewing the jeans, the Cambodian women have been able to escape danger and poverty.

VETERANS*
On Saturday, Prince Harry will open the Invictus Games, a multi-sport event for wounded, injured and ill armed services men and women. He began the games after learning about the benefit of sport for mental* and physical recovery.

Prince Harry was a soldier in the British Army for 10 years and has a special interest in veterans’ health.

CLASSROOM ACTIVITY
1. The issues
Prince Harry and Meghan are supporting a lot of causes and highlighting a number of important issues while on tour in Australia. Use the information in the article to make a list of the issues they are highlighting, why you believe the issue is important and how they have raised awareness for it. On your list make a note of whether this is a world issue or an Australian issue.

2. Extension
Imagine that Prince Harry and Meghan have room in their schedule to highlight one other issue. What other issue would you like them to raise awareness about? How could they do this?

Think about where they should visit to support this issue and what they might do there. Write a short speech that either Prince Harry or Meghan could give at this event stating what the issue is and how we can support/improve the issue and why it is important either for Australia or for the world.

HAVE YOUR SAY: What issue would you like the next Royal visit to bring attention to? Why?
Use full sentences to explain your thinking.