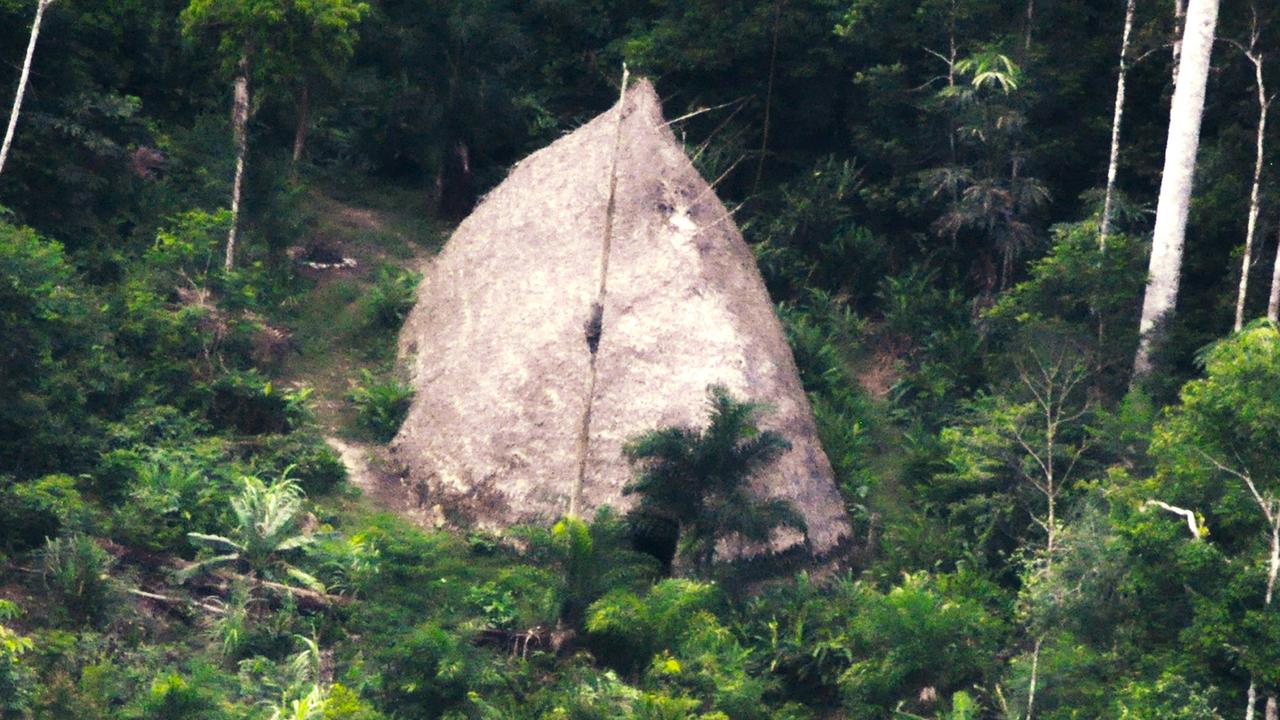 A maloca in Vale do Javari, Amazonas state, Brazil. Picture: Funai via AP

A drone has filmed a Brazilian Indian tribe the outside world has never seen.

The tribes people live deep in the Amazon rainforest and have never had any contact with or known anything about the outside world.

They survive in a way that would not have changed for thousands of years — cutting canoes from trees and making tools and weapons from sticks and rocks.

The incredible video was shot from high above.

It shows a group of 16 indigenous* people from a tribe which, according to the Brazilian agency for indigenous tribes, Funai, has never had any outside contact.

In a clearing in the forest, the drone filmed a tribesman* walking with a bow and arrow, a traditional building known as a maloca, and a plantation of what is believed to be manioc, or cassava, a starchy food plant.

Other members of the tribe can be seen walking through the jungle near the clearing. A photograph from the drone video of uncontacted Indian tribes people in Brazil. The red circles will help you know where to look for people when you watch the video.

The name or ethnicity* of the tribe is unknown as the group has never been seen before and no contact has ever been made, according to Funai.

The agency, which released the film yesterday, said its experts trekked more than 300km into the 137,000 square-kilometre Vale do Javari Indian reserve on the border with Colombia and Peru, after receiving reports that illegal hunters were threatening tribes.

The three-week expedition last year included travelling 180km along rivers before riding on motorbikes and then walking for 120km through dense jungle.

The group also found items that confirmed there were uncontacted tribes in the region, including a stone axe tied together with plant fibre, a horn made from tree bark and dugout canoes. 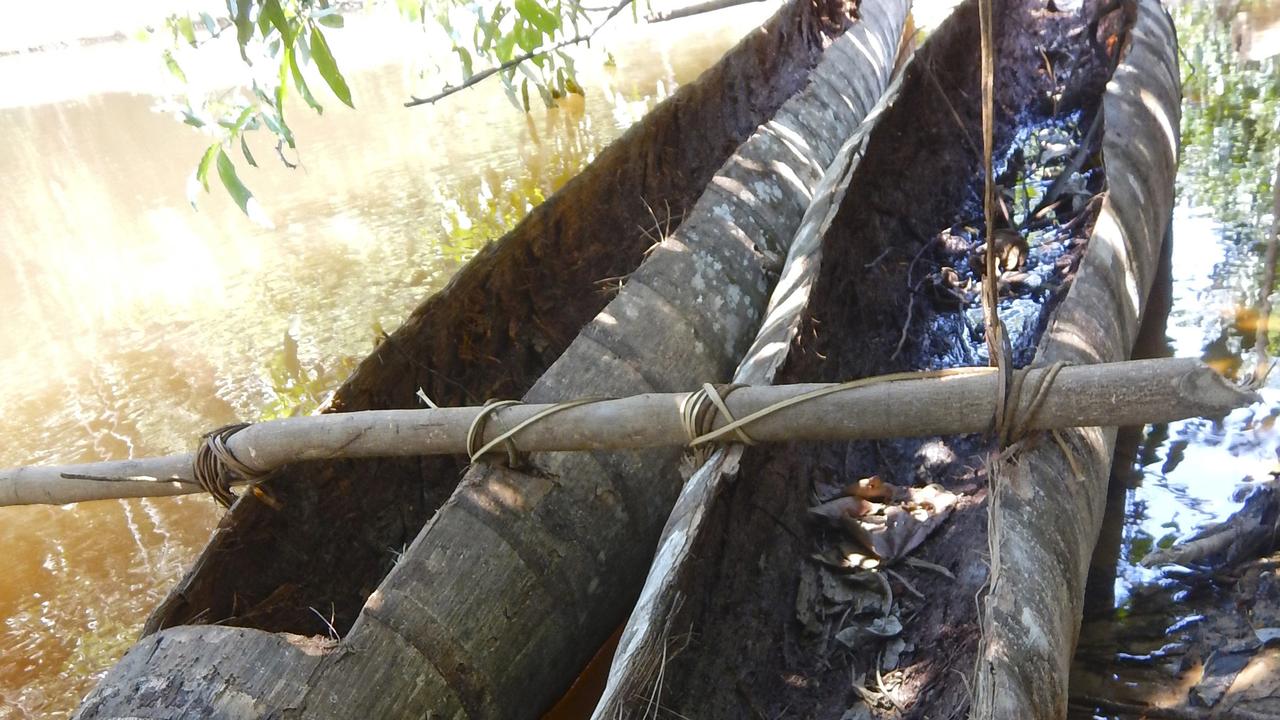 Canoes belonging to Indian tribes people on the bank of a river in Vale do Javari, Amazonas state, Brazil. Picture: Funair via AP

The region, in the Brazilian state of Amazonas, is known to be occupied by six tribes that have been contacted.

But Funai believe there at least 16 tribes living in the forest who have never had any contact with civilisation. 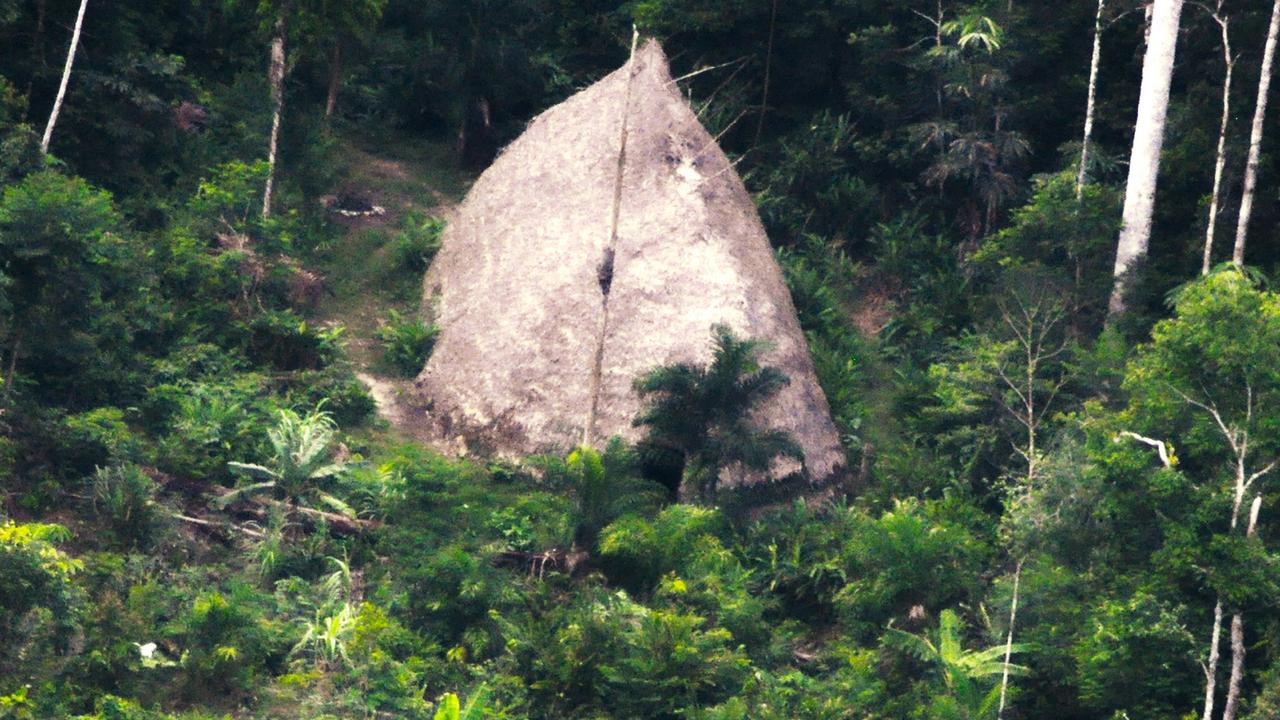 A maloca, or long house, in Vale do Javari, Amazonas state, Brazil. Isolated communities are sometimes filmed, but Funai does not make contact with them. Picture: Funai via AP

Mr Pereira said it is the first time Indians have been filmed using drones, which the tribespeople couldn’t see or hear.

He said: “The use of drones provided safety both for the indigenous people and for the Funai team.

“The idea is to share these scenes in order to confirm the existence of these Indians and the importance of protecting them. We need to strengthen our work in the region.”

The team also found evidence of illegal hunters in the region and animals were released from illegal traps, a spokesman said. This 2017 photo released by Funai shows an axe on the ground in Vale do Javari, Amazonas state, Brazil. The pen was placed on the ground by Funai to show the size of the axe. Picture: Funai via AP

Funai’s Bruno Pereira said that no attempt will be made to contact this or any of Brazil’s uncontacted tribes.

He said: “We respect their isolation*. Their isolation will remain until the day they decide against it, or until an extreme situation requires the State to make contact.”

Funai believe there are 113 uncontacted tribes living in the Brazilian Amazon, only 27 of which have been seen, which could number up to 3000 people.

There are also said to be 15 uncontacted tribes in neighbouring Peru and others deep in the forests of Bolivia, Colombia and Ecuador.

This story first appeared in The Sun and was reproduced with permission.

Although no contact has been made with this tribe, their existence is known and some items have been found that belong to them. These items and the footage from the drone would give some clue about their customs.

Make a list of the items and knowledge gained from the footage and make assumptions about this tribe’s way of life. Remember, assumptions are not necessarily correct. More information would need to be collected to know for sure.

What we know: tribesman carrying bow and arrow

Assumption: this tribe hunts for food or needs bows and arrows for protection

2. Extension: Funai, the Brazilian agency for indigenous tribes, has said that they will not make contact with the tribe as they respect their isolation.

If you could make contact with this tribe or one of the other tribes in the Brazilian Amazon, what would you like to know about their way of life? Write 5 questions you would like answered and why these interest you.

HAVE YOUR SAY: What would you most like to know about the uncontacted tribes in Brazil? Use full sentences. No one-word answers.