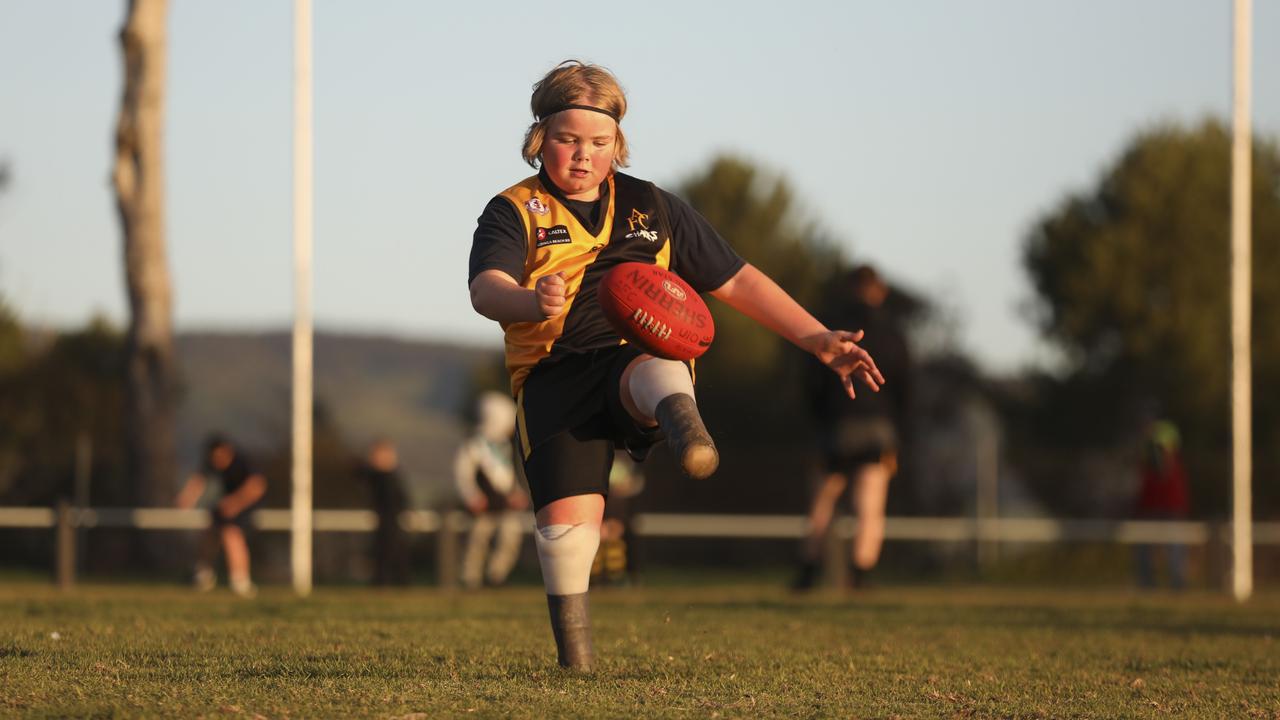 Aldigna under-12 footballer Jett Wortley had his feet amputated when he was 10 months old. Picture: Dean Martin

Jett Wortley is like any other 11-year-old Australian kid.

He loves footy, playing basketball as well as mucking around with his friends and three brothers — Indy, 19, Izaih, 14 and Declan 3.

Jett is also a double amputee*.

Jett, who is from Aldinga Beach, about 45 minutes from Adelaide in South Australia, was born with a condition called bilateral* fibular hemimelia. That means the fibula bone in both his legs was missing.

The fibula is a long, thin bone in the lower leg that runs parallel to the tibia* and the two come together to form part of the ankle joint.

As Jett did not have a fibula, his ankles, feet and toes did not develop properly and his feet were amputated when he was 10 months old.

But Jett, a fun-loving, energetic boy, refuses to let having no feet get in the way of him living a normal life.

At 13-months old he was walking with stumps and sometimes, prosthetic* legs.

He also took up football when he was five and this year joined Aldinga Sharks’ under-12 black team after spending the past few years lining up with nearby Noarlunga’s junior teams.

Jett uses his condition as motivation and hopes to inspire others with a strong, but simple outlook on life — “I just want to show people that you can do anything,” he said.

“You can achieve anything, no matter how you look.

“I’m as normal as any other normal kid.

“I love playing basketball and video games and messing around with my friends.

“It took me about two years to learn how to balance, but it’s fun.

“Learning to kick the footy was actually probably one of the easiest things.

“The best thing about playing footy is that you get to play with your friends.” Jett’s mother, Michelle Clark, said her son’s condition was revealed during the ultrasound* scan she had when she was 20 weeks pregnant.

She can still recall what went through her mind when she found out.

“I was devastated but also scared of the unknown,” Ms Clark said.

“It was just the unknown, I guess, but now that he’s here, he’s just completely normal and it’s really not a big deal.”

After having X-rays when he was two weeks old, Jett then underwent surgery to amputate his feet at 10 months old.

He has never needed any further medical attention or surgery since. Jett riding his bike as a younger boy, with the help of prosthetic legs. Picture: supplied

Ms Clark said having family and friends treat Jett like normal is behind his positive attitude.

“He’s not going to grow feet, so he’s just got to get on with it and he has.

“We’ve never made an issue of it.

“His older brothers played footy and my terms of letting him play were exactly like they were for my other kids.

“He’s not going to break and he’s exactly the same as the other boys.

“He loved kicking the footy with his brothers growing up and he did used to wear his (prosthetic) legs a bit more but they get in the way.

“He’s out here playing footy because of his mates more than anything and to fit in and be part of it.” Jett used to wear his prosthetic legs more often but found they got in the way when he was running and kicking. Picture Dean Martin

But there have been some rough times as Ms Clark admits people can sometimes be cruel.

“I’m sure it is hard on him even though he says it’s not.

“When he was little he would say ‘I hope Santa brings me feet,’ and that was absolutely devastating.

“It was hard as he was growing up and we would go to parks and everyone would stare.

“At first it really took a toll* but now it’s absolutely nothing.

“He’s happy and he makes the best of what he’s got.

“Jett sometimes tells kids a shark bit his feet off but that’s just his way of dealing with it.

“He’s also made a really good group of friends at Aldinga Primary and they don’t treat him any different.

“His brothers treat him normal, they pick on him and they’ve loved him from day one.”

Ms Clark said Jett is an inspiration to her.

“He’s not disabled, he’s differently-abled, that’s the wording I like to use.

“He’s been a trooper since day one, is happy and easy going.

“He has made my life a better place.

“I think Jett was given to me for a reason, he’s made me stronger and I’ve been the mum that he needed instead of holding him back, I’ve let him go and get it.”

“It’s fantastic for a kid to come out and play and want to be part of it through his adversities* takes a lot of courage,” Mr Sywak said.

“The other kids are just stoked to have him out here with them.

“He’s just having a red-hot crack at it even though he’s lacking in things that others take for granted.”

Never too young to be a good sport

From paralysis to Mt Everest

CLASSROOM ACTIVITIES
1. What is Resilience?
Jett is a kid who has great resilience. Resilience is being able to cope or bounce back when things are difficult. Write a list of all of the different ways you can show resilience in your everyday life. Share your list with another student. Add more ideas to your list that they give you. Use your list to create a poster to help kids at your school learn about resilience and why it is important.

2. Extension
“You can achieve anything, no matter how you look.” Use this sentence as the last sentence of a story.

HAVE YOUR SAY: Think about a difficulty you or a family member has experienced. How did you or your family member show resilience and cope with the difficulty?
No one-word answers. Use full sentences to explain your thinking. No comments will be published until approved by editors.