Part of Mark Knight's cartoon. See the full cartoon below.

We’ve been well informed about the effects of the coronavirus on people. Being a respiratory illness, it can severely limit a person’s ability to breathe and, in turn, lead to pneumonia.

What I’ve found fascinating apart from the medical ramifications*, is the ‘behavioural’ effects that Covid has on people. The repercussions* are profound and occur every time there is a Covid outbreak and the ensuing* lockdown of communities. It is serious and causes people a huge amount of distress.

I’m talking about the panic buying and hoarding of toilet paper.

Whenever we have a Covid cluster and health officials advise people to stay in their homes there is a rush on supermarkets and the panicked mob are after one thing: getting their hands on as many rolls of that 3-ply toilet tissue as they can carry!

I’m not sure what special medicinal* properties toilet paper has but people feel safer when their trolley is fully laden with Wondersoft.

In times of financial crises investors turn to buying gold stocks as a safe haven for their money. Similarly in times of Covid, the preferred stash for your cash is dunny paper. Go figure?

A textbook example of this was the recent lockdown in Victoria. The 4th in this current pandemic. Let’s make it more glamorous and use Roman numerals and call it ‘Lockdown IV’. The Victorian Government announced that due to an infection cluster in Melbourne they would be locking down the whole state for a week from midnight. It set everybody off like the proverbial* starter’s gun.

Half the population raced to the supermarket to stock-up on supplies for the week: ie a truckload of toilet paper. The other half thought it would be a good time to maybe get vaccinated. They queued up for miles outside the Royal Exhibition Building and other vaccination hubs around Melbourne to get the jab. Like hoarding toilet paper, the vaccine was now seen as a way to protect oneself from the ills of the coronavirus.

As I sat thinking of a cartoon for the next day’s paper, I observed the reaction of people to the news, and how they judged what was the best move in this uncertain time. I came up with an image in my mind that was simple, but when I thought of it, it made me laugh. What if people did both actions? What if they bought loads of toilet paper and had the jab as well? The virus would have no chance!

Now I had to draw that concept. Drawing a cartoon is like telling a joke. It’s not so much the joke itself, but how you tell it … or how you draw it. I started with a huge line outside a vaccination centre, with everyone waiting patiently with a huge jumbo pack of toilet tissue under each arm. That said it, but it didn’t focus on a particular person. I wanted to show the intent on the person’s face, the determination to win, the struggle for survival, the human emotion.

So in a second draft I took the drawing inside the vaccination hub, into one of the booths where people receive the jab. Here was where I thought I could show the two-pronged* strategy of getting the jab and hoarding dunny rolls up close. I drew a man sitting on a chair. The expression on his face is intense, his body language hunched, primed to win this contest. His sleeve is rolled up and a health worker is injecting him in the arm with the Covid vaccine.

At that same time his arms are outstretched like the wings of a passenger jet, under which he holds two jumbo packs of 4-ply Wondersoft lavender-scented toilet tissue. He has a look of victory and invincibility* about him. He is winning. 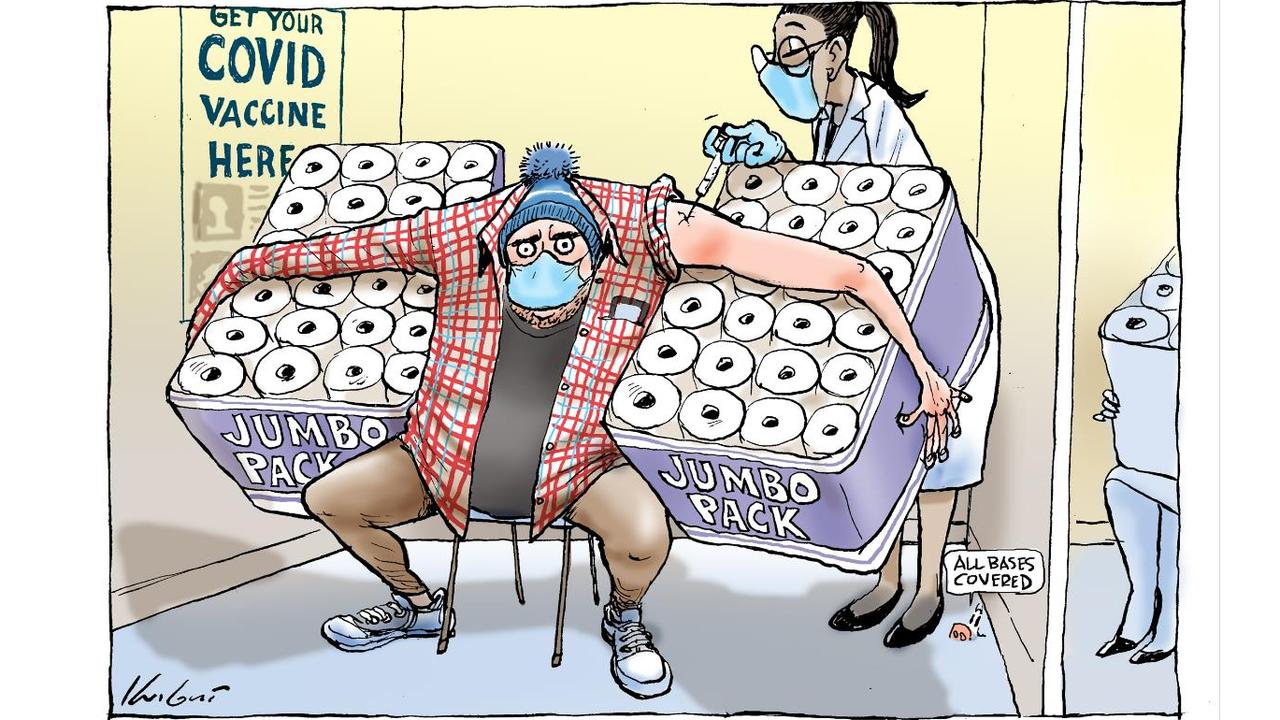 I had achieved my goal of showing how we have been affected by the pandemic and how we as humans are adapting!

Clever ads no cure for complacency

Jane’s V a little sign for victory for science

CLASSROOM ACTIVITIES
1. Caption it!
Cartoonist Mark Knight has not used a caption on this cartoon, mostly letting the imagery speak for itself.