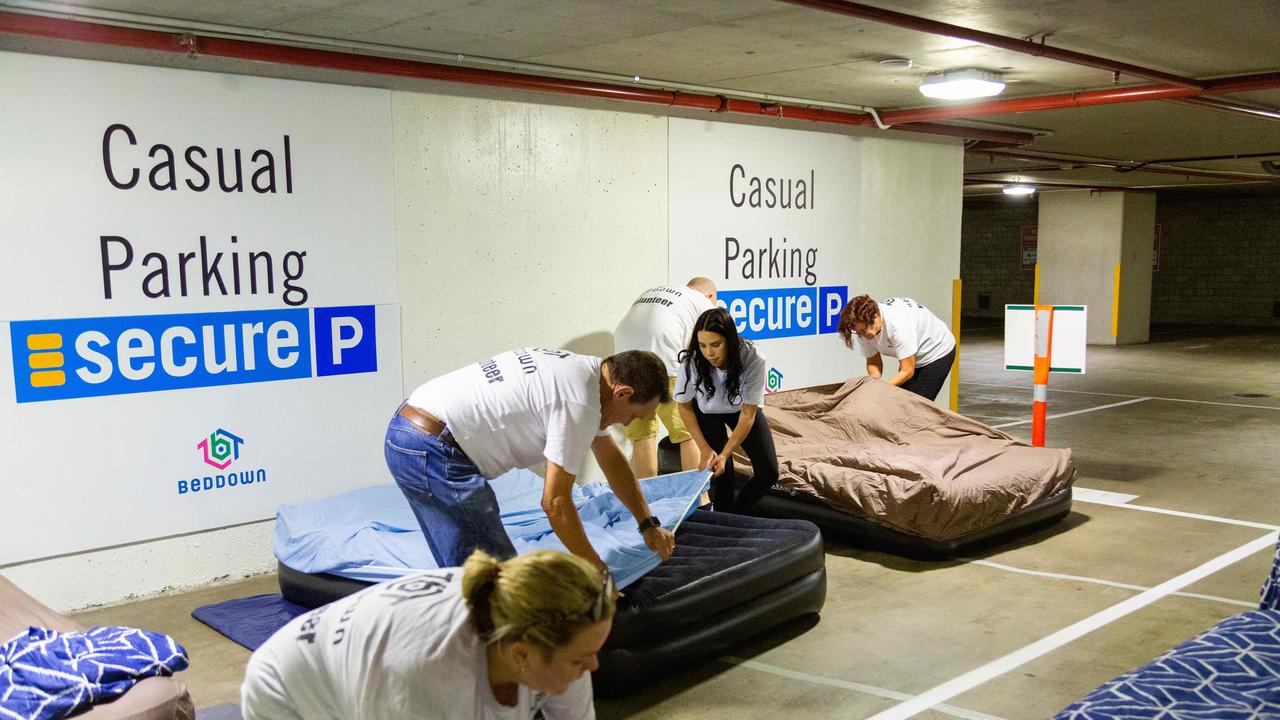 One man’s big plan to help Australia’s homeless people have a good night’s sleep is a step closer to becoming a reality after a trial turned an empty carpark into pop-up accommodation.

One guest who stayed the night told the organisers about the sleep deprivation* he’d been experiencing and that his night in the carpark was the first time in a year he’d had a dream.

The two-week trial, by new non-profit organisation Beddown, took place in a carpark in Brisbane’s CBD in Queensland and finished last week.

Beddown founder Norm McGillivray considers the experiment a success and is now working on refining* the operation for the next trial and attracting government or corporate* sponsors.

The idea is pretty simple: when a city carpark empties for the night, Beddown volunteers set up inflatable mattresses with bed linen and pillows. A range of other service providers also arrive to help the guests: doctors, nurses, dentists, hairdressers, mobile laundries and showers, food charities and more. Beds set up ready for guests at the Brisbane, Qld, carpark for the Beddown trial. Picture: supplied

Beddown’s first corporate partner is carpark operator Secure Parking, which offered a carpark for the trial within minutes of Mr McGillivray explaining his idea to the company’s CEO, Peter Anson.

The plan is to roll out the model to other city carparks across the country and, in the longer term, access other spaces in towns and cities that are empty at night.

The idea for Beddown came to Mr McGillivray when he took a coffee break one day from his self-assigned project to work out what organisation he could set up that would help people experiencing homelessness yet not replicate any existing services.

He drove to his local shopping centre to get the coffee and parked in the almost empty carpark.

“The place was virtually* empty and looking around, I saw great shelter, it was really clean, so I went home and started doing some research, thinking about a carpark as a space and thinking through what the sleeping arrangement was going to look like,” Mr McGillivray said. A carpark is an option for Beddown programs in the future because they’re often empty at night and allow guests to sleep out of the worst of the weather and feel safe. Picture: AAP

Mr McGillivray’s desire to help homeless people comes from memories of his own father’s homelessness in the UK, where Mr McGillivray grew up.

“The motivation behind that stems back to my childhood in the 1970s, when I was a very, very young fella,” he said.

“My father was a carpenter. When he was in his early 30s he suffered a stroke that impeded* his speech.

“Effectively that was the end of the business when I was about two years old. My own personal opinion was that put a lot of strain on the relationship, my parents separated and divorced and he found himself on the streets of London homeless.

“My memory of him is that he’d be around for a week or two and mum would get him tidied up, a haircut, new clothes and then he’d go back to the streets of London until he had a heart attack at 42 and died.

“My feeling is that homeless people are someone else’s mum, dad, daughter, son, brother or sister and maybe I can help them.” A person still asleep under a blanket after a night outdoors on Swanston St in Melbourne, Victoria. Picture: Andrew Henshaw

The Brisbane trial provided accommodation for 41 guests, who each completed a guest survey. On average, they rated their sleep 4.5/5, bed comfort 4.5/5 and reported feeling safe and secure.

Mr McGillivray said kids can help Beddown succeed by talking to adults about potentially useful spaces in their own community that are empty at night and consider ways to raise money to donate to Beddown and other organisations that help people experiencing homelessness.

Homeless Australians out in the cold need our help

CLASSROOM ACTIVITIES
1. Help for the homeless
Work with a partner to brainstorm some possible safe sleeping places for people experiencing homelessness in your town, a bigger town close to yours or your closest city. In this trial, they’ve sourced a carpark. Where else can you think of that is empty at night and might be a possible solution?

Now compile a list of equipment an organisation would need to make this work (for example, in the Kids News story they used inflatable mattresses for beds. You can suggest the same or something different).

What else could you suggest to make this place a safe, secure and comfortable environment for people who have no home to live in?

2. Extension
Think of a fundraising idea you could do on your own or through the school to help the Beddown organisation or help homeless people in general. Write a letter to your school principal outlining your idea and how it would raise money for a charity. Also make sure you include why you think it’s a worthwhile charity to fundraise for.

HAVE YOUR SAY: What ideas do you have for how your community could help people experiencing homelessness?
No one-word answers. Use full sentences to explain your thinking. No comments will be published until approved by editors.