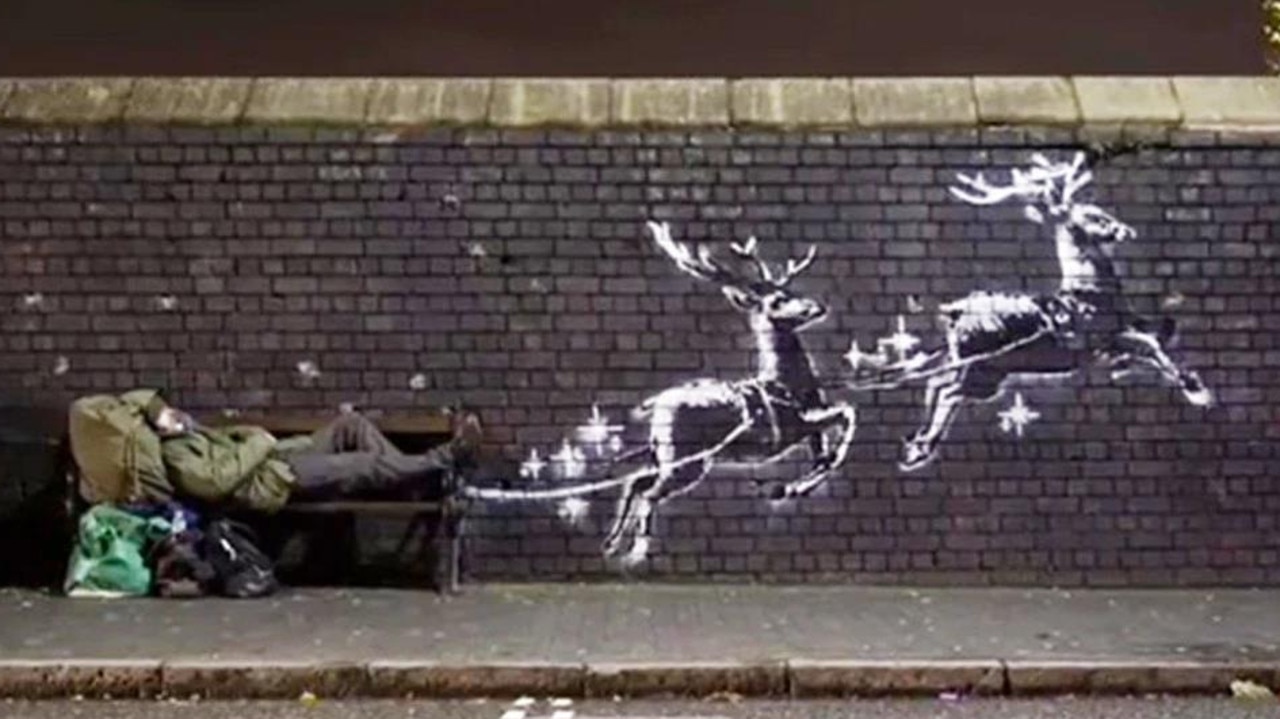 Banksy's reindeer mural in Birmingham, UK, which was filmed with a man named Ryan having a sleep on the bench. Picture: Instagram/@Banksy

Elusive* street artist Banksy has used art to highlight* the issue of homelessness in a living mural showing two painted reindeer pulling a real street-bench sleigh, on which a man is sleeping rough.

A video posted on Banksy’s Instagram shows a bearded man named Ryan lying on the bench, echoing* the traditional image of Santa on his sleigh.

“God bless Birmingham,” Banksy wrote. “In the 20 minutes we filmed Ryan on this bench, passers-by gave him a hot drink, two chocolate bars and a lighter – without him ever asking for anything.”

The video attracted nearly 3 million views on Instagram in the first 24 hours and created a buzz in Birmingham.

The two reindeer gained red noses in the hours after the mural was unveiled. A protective fence was in place on Tuesday, stopping any other additions to the design. 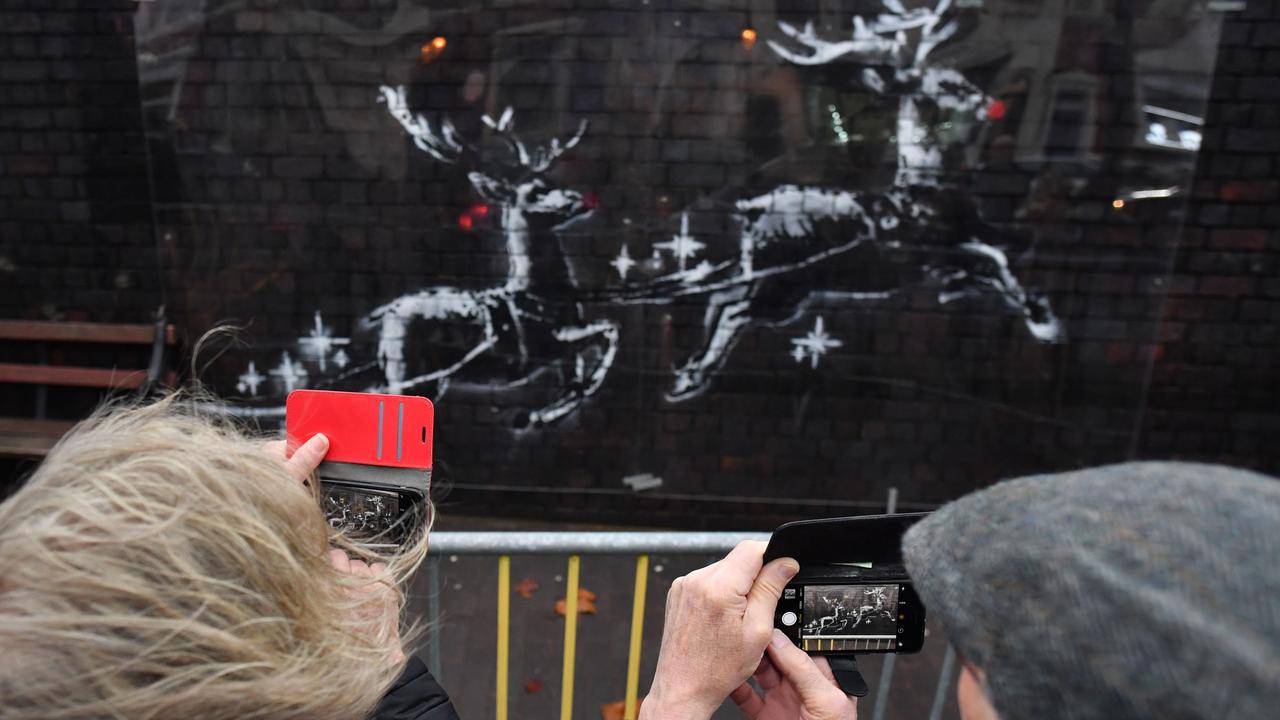 Members of the public take pictures of an artwork by artist Banksy that appeared overnight in Birmingham on December 10, 2019. The mural now has a barrier and protective clear screen over it. Picture: AFP

Mercia Buddle, one of many people visiting the mural on Tuesday, said it was good for the city.

“Visitors are coming and they have probably come from all over the Midlands*,” she said. “And of course it is great to highlight homelessness when the guy was actually on the bench, so it is serving a lot of purposes really – I think it is great.”

Works by Banksy, who has never revealed his identity, have rocketed* in value.

A large Banksy painting of chimps sitting in Britain’s parliament sold for more than $19 million in October, a record price at auction for his work.

Later in the same month, however, Banksy opened his own “online store”, selling works for as little as $19 to buyers who were randomly* selected and who could answer the question: “Why does art matter?”. 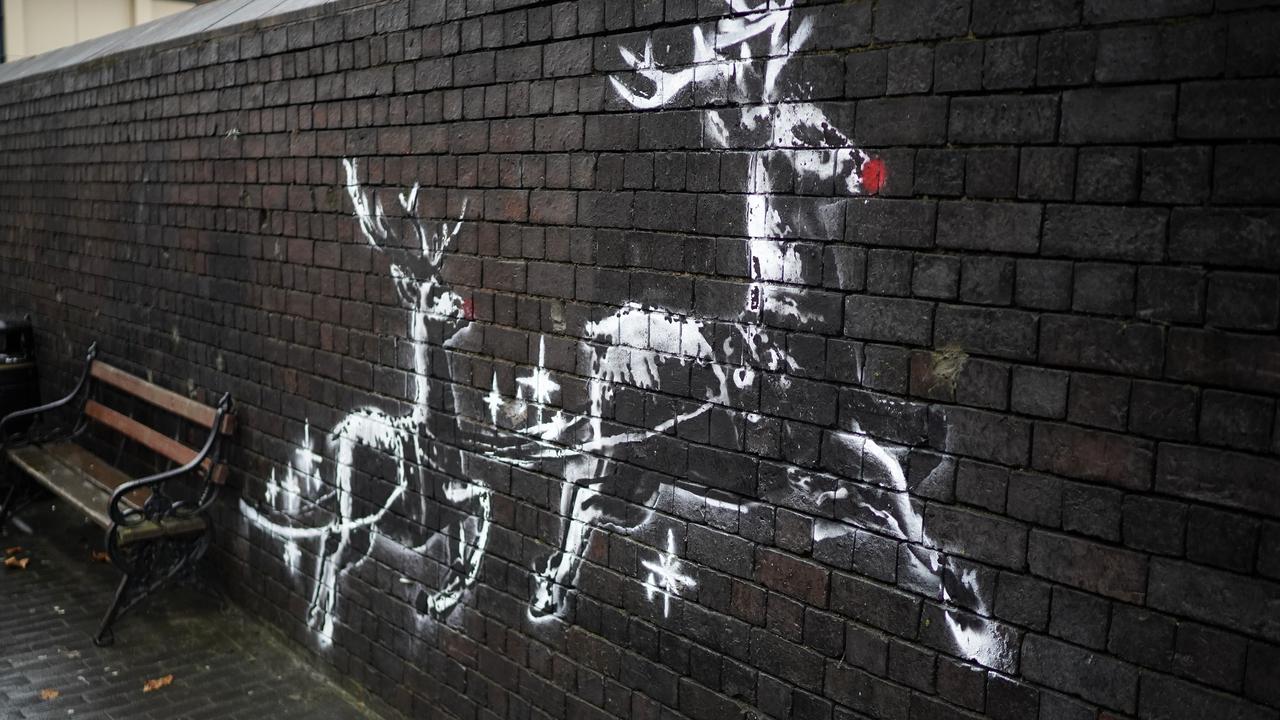 HOMELESSNESS IN AUSTRALIA
On any night in Australia:

Homeless Australian out in the cold need our help

Sweet dreams and a good night’s sleep in a carpark

How to have a cleaner, green Christmas HOW THE WORLD CELEBRATES CHRISTMAS

The Kids News digital inquiry kit “How the World Celebrates Christmas” comes with 50 activities about Christmas in a digital workbook for just $5, including GST.

The kit and the supporting features on Kids News will help students understand the history and evolution of Christmas, the religious and cultural aspects of its celebration and how traditions vary across the world.

It aims to encourage students to consider how they can think of and spread kindness to others during the festive season.

The kit is at kidsnews.com.au/education-kits

CLASSROOM ACTIVITIES
1. Ask Banksy
Imagine you are a reporter for Kids News. You are going to interview Bansky about his mural and why he has created it. We don’t know who Banksy is, so you will not be allowed to meet him. He has agreed to let you write to him – at least five questions about the mural, what he thinks about the problem of homelessness and the purpose of his mural and anything else you would like to ask him. He will not answer any questions that might give away who he is.

Write the questions. Then, using the information in the story, write down what you think his answers to each question might be.

2. Extension
Banksy created an artwork to make people aware of an issue, homelessness, that he thinks is important and that people should be aware of. What is an issue or problem that you think is important? Create an artwork that will make people take notice of the issue and help make them aware of it.

VCOP ACTIVITY
Bag for the Homeless
It’s hard to imagine so many people living on the streets, but some hide the fact they are homeless, so you don’t see them all.

For a homeless person, it’s important to have everything you need as small as possible. Create a list of items that you could fit into a backpack or overnight bag, that people make as a donation at Christmas. Try to base your bag on: want, need, wear, read items.

HAVE YOUR SAY: What ideas do you have for how you can help people who are experiencing homelessness?
No one-word answers. Use full sentences to explain your thinking. No comments will be published until approved by editors.