Daniel Bull, 37, is the world record holder for climbing the seven summits and seven volcanoes. Here he is climbing in Greenland.

And, amazingly, he made the final climb with his 99-year-old Nan.

Dan Bull, 37, from Melbourne, has this month officially been recognised by the Guinness World Records for his achievements.

“I decided to make (Mount) Kosciuszko the last. My family came with me. Dad had just had a pretty major hip replacement and my sister came and Nan did too, despite turning 99 on that day,” he said.

His Nan, Evelyn, who still lives on her own in Melbourne, didn’t quite reach the top, but the climb put her grandson’s name in the record books. Half way up Mount Kosciuszko with the family. From left, mum Jill, father Martin, Dan, sister Bridie and nan Evelyn.

Mr Kosciuszko at 2228m was among his smallest climbs.

Elbrus in Russia was his first taste, Everest almost killed him and he went up Kilimanjaro in Tanzania for a charity run.

Mr Bull, who works in IT, began his love affair with climbing after seeing clips on the TV.

“Everest was definitely the dream,” he said. “I remember seeing old footage* on the TV in our lounge room. And then it was turning that dream into a goal, that was a big part of it.”

Mr Bull reached the summit* of Everest in May 2008. But he speaks about it as though it were yesterday.

“It was just this moment of exhilaration* when I reached the summit,” he said.

“And then there is this feeling of dread* because you start thinking ‘I have to get down’.”

Mr Bull said that on his way back down he almost died. The thin air meant that he was taking up to 10 breaths in and out for each step. Taking a rest break during a training climb on the Swiss/Italian border in the Alps in Europe. Jumping in the air above a fjord in Norway on a rock formation known as the Troll’s Tongue.

Mr Bull thinks his Nan, who will receive her 100th birthday card from the Queen in May, might have something to do with his determination.

“I had done some training on that 40C day on the weekend and it was about 4pm so I thought I’d call Nan and check on her,” Bull said.

“She’d been out all day and was just about to sit down in front of the air conditioning but she said she had to go outside and feed the birds.

“She’s a machine; maybe that’s where it comes from.” 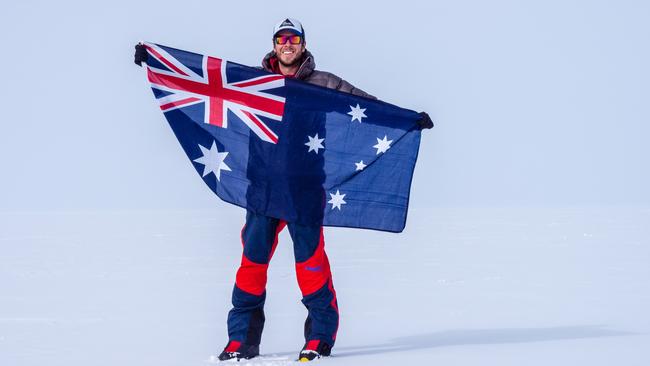 Daniel Bull is proud that an Aussie holds the world record.

But when you’ve been on top of the world, it can be hard to work out what to do for your next challenge.

Mr Bull has that covered.

He is going to swim in Ojos del Salado on the Chile-Argentina border. It’s the world’s highest — and possibly coldest — lake.

And he plans to do it in his Speedos.

“I spotted this lake on one of my climbs and I found out it was the highest lake on the planet,” he said. “I love water and I love climbing. Even though I’m not really a swimmer I loved the idea of combining the two.”

Mr Bull plans to tackle the lake challenge in water temperatures of as low as -1C, in the next few months.

CLASSROOM ACTIVITIES
1. Read or listen to the article carefully and complete the following activities.

Imagine you were Mr Bull on his last climb, describe what he may have felt as he achieved this world record.

2. Dan Bull has climbed the highest mountain and highest volcano on each continent.

Using an atlas locate the mountains and volcanoes he has climbed and mark them onto a blank map of the world. Find the height of each mountain/volcano and write it on the map as well.

Extension: Create a picture graph to show the difference in the heights of each mountain and volcano that Mr Bull climbed.
Present them in order of height. Think about the scale you will need to use for your graph so that all summits can be represented clearly on your graph.

IN ONE SENTENCE, TELL US WHAT YOU THOUGHT OF TODAY’S STORY
Kids News will publish the best comments. Try to use the correct spelling, punctuation and grammar.