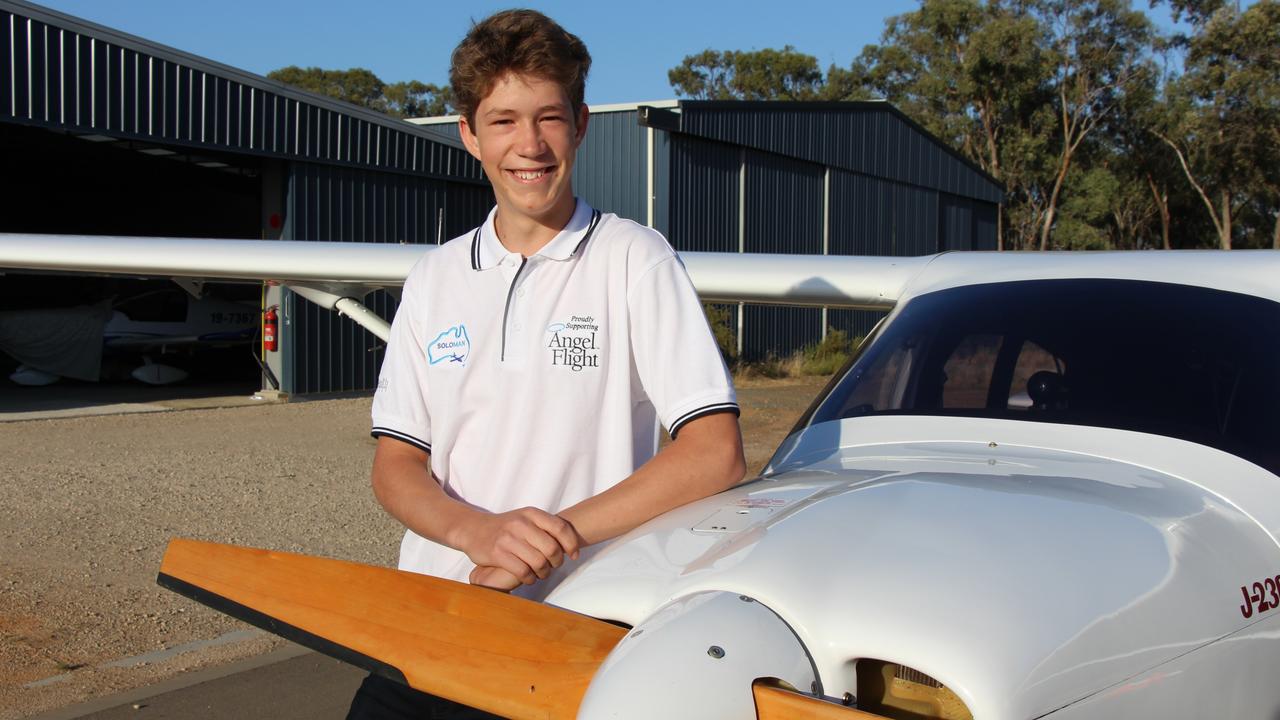 Solomon Cameron heads off on his solo circumnavigation of Australia in May.

A teenager who can’t drive a car is about to fly an aeroplane solo around Australia to try to raise $40,000 for charity.

Solomon Cameron is 15 years old and from Bendigo, Victoria. Flying is his passion.

“I think it’s just the fact that you’re in the air, doing something that not everyone has the opportunity to do. It’s part of the reason why I really want a career in aviation* … a commercial* pilot, maybe working somewhere up north.”

Though he doesn’t have a learner’s permit to drive a car, the Year 10 student has already completed about 90 flying hours in his light aircraft, flying across Victoria to places such as Mount Beauty, Shepparton, Mildura and Yarrawonga.

Now he is preparing to fly unaccompanied* around Australia in May to raise funds for Angel Flight, a charity that arranges non-emergency flights to assist rural people in need of specialist medical treatment.

The Bendigo Flying Club has been helping Solomon plan his solo flight and helping foster* the passion for aviation in a young, ambitious* pilot.

Solomon said it was meeting fellow pilots who had assisted with the Angel Flight charity that piqued* his interested in a charity flight around Australia.

“I’ve met a few pilots who work for them. I think they do a pretty cool job, and I’d really like to support their cause,” Solomon said.

The budding young pilot often rides his bicycle to the Bendigo airport, or his mother drops him off, before he settles down in the pilot’s seat of his light aircraft and flies unaccompanied across Victoria. Solomon has been flying since he was 12.

It’s a passion that first started when he was 11 years old and would ride his bike to the airport every weekend to sit on a bench for hours watching the planes.

He mowed lawns and did other odd jobs for a year to save up for his first flying lesson at the age of 12.

“Since then I’ve been flying about in planes … it’s just really peaceful when you’re up there. It’s pretty fun as well.”

Solomon has been supported in his planning by Linda Beilharz, the first Australian woman to ski to both the North and South poles.

Ms Beilharz will continue to support Solomon as his journey progresses, providing advice and guidance regarding weather conditions and planning as he spends about 30 days circumnavigating* the country.

Solomon will leave on his journey from Bendigo.

“The trip takes me to the most southern, eastern, western and northern parts of Australia. I’m going to be visiting quite a few new places, and I’m looking forward to seeing it all from the air.”

All funds raised by Solomon’s flight will go towards essential safety for the trip, with 100 per cent of the leftover funds donated to Angel Flight.

For information or to donate to Solomon’s fundraiser flight, visit gofundme.com/soloman-15

Great Air Race of 1919 to be recreated

CLASSROOM ACTIVITIES
1. Flying SOLOman
Use an atlas and either draw or use a blank map of Australia to mark Solomon’s planned journey around Australia, as well all the places mentioned in the article that he has flown to before. Name the places where you believe Solomon will stop as he says that the trip will take him to the “most southern, eastern, western and northern parts of Australia”.

2. Extension
Do you think 15 years old is too young to undertake this flight on his own? Outline your reasons for why or why not. What is a goal you’d like to achieve for yourself in the coming years?

HAVE YOUR SAY: Would you like to fly an aeroplane? Why or why not? Send a message of support to Solomon.
No one-word answers. Use full sentences to explain your thinking. No comments will be published until approved by editors.