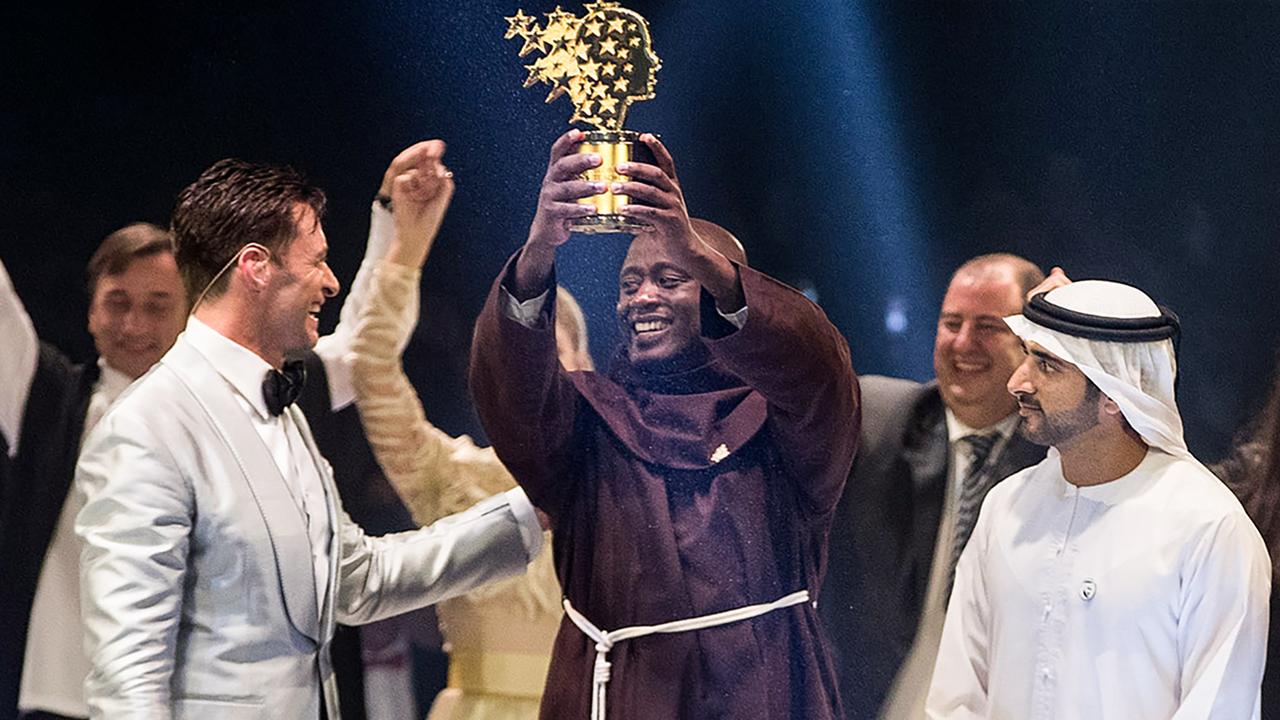 A teacher from a remote village in Africa who gave away most of his pay to the poor has won a $1.4 million prize.

The annual Global Teacher Prize was awarded to Peter Tabichi for his work teaching in a school in Kenya that has just one computer and poor internet access, in an area affected by drought and famine.

In contrast, Sunday’s award ceremony was at the luxury Atlantis Hotel in Dubai in the United Arab Emirates and was hosted by actor Hugh Jackman.

Brother Tabichi said the farthest he’d travelled before was to Uganda, which neighbours Kenya. This trip was his first time on an aeroplane.

“I feel great. I can’t believe it. I feel so happy to be among the best teachers in the world, being the best in the world,” he told news agency The Associated Press (AP) after his win.

Br Tabichi teaches science to high schoolers in the village of Pwani in Kenya’s Rift Valley, where almost a third of children are orphans or have only one parent. Many students walk more than 6km to school on rough dirt roads. Drought and famine* are frequent.

He said the school has no library and no laboratory. He plans to use the million dollars from his win to improve the school and feed the poor.

Despite the obstacles Br Tabichi’s students face, he’s credited with helping many stay in school, qualify for international competitions in science and engineering and go to university.

“At times, whenever I reflect on the challenges they face, I shed tears,” he said of his students, adding that his win will help give them confidence. Peter Tabichi’s home province of Nakuru in the Rift Valley in Kenya is home to incredible wildlife such as this white rhino on the shore of Lake Nakuru. The province is also plagued by severe droughts, famines and many of the people are very poor. Picture: iStock

Kenyan President Uhuru Kenyatta said in a statement that Br Tabichi’s story “is the story of Africa” and of hope for future generations.

The prize is awarded by the Varkey Foundation, which runs schools in the United Arab Emirates, Egypt and Qatar.

In his acceptance speech, Br Tabichi said his mother died when he was just 11 years old, leaving his father, a primary school teacher, with the job of raising him and his siblings alone.

Br Tabichi thanked his father for instilling* Christian values in him, then pointed to his father in the audience, invited him up on stage and handed him the award to hold as the room erupted in applause and cheers.

“I found tonight to be incredibly emotional, very moving,” Mr Jackman told AP after hosting the ceremony and performing music from his film The Greatest Showman.

“It was a great honour, a thrill to be here and I just thought the whole evening was just filled with a really pure spirit,” he added. Australian actor Hugh Jackman applauds Kenyan teacher Peter Tabichi, who gives away 80 per cent of his income to the poor in the remote Kenyan village of Pwani. Picture: AP

Now in its fifth year, the prize is the largest of its kind. Br Tabichi was selected out of 10,000 applicants.

The winner is selected by committees of teachers, journalists, officials, businesspeople and scientists.

CLASSROOM ACTIVITIES
1. What makes a Good Teacher?
List all of the things that make someone a really good teacher.

2. Extension
What do you think Peter Tabichi should spend the prize money on at his school? Think about all of the things that a very poor school in Africa may not have. Write a report that outlines what you think Peter’s school needs and why these things are important.

VCOP ACTIVITY
Teacher of the Year Award
There are many awards in education, but a lot of great teachers don’t win because they are not nominated. We would like you to nominate the teacher you have had that you think should win the teacher of the year award.

Write a persuasive letter to Kids News explaining why your teacher should win the teacher of the year award. Remember to use emotive and persuasive language to convince us of why they are the best teacher ever!

HAVE YOUR SAY: What positives, opportunities and resources do you most value about your schooling, when you compare yourself to Peter Tabichi’s students?
No one-word answers. Use full sentences to explain your thinking. No comments will be shown until approved by editors.