Who was Leonardo da Vinci, what did he do and why is the world still so fascinated by him? A self portrait of Leonardo da Vinci and his painting the Mona Lisa. Picture: AP

This month marks 500 years since Leonardo da Vinci lived. He was so ahead of his time people are still talking about how smart he was!

The inventor, painter, sculptor, scientist, geologist*, cartographer*, mathematician, musician, writer, thinker and tech whiz painted the most famous artworks in the world, including the Mona Lisa and the Last Supper.

He invented a robot, parachute, glider, helicopter, armoured tank and diving suit, thought about capturing solar energy, planned a clean, healthy, modern city and made dozens of important discoveries about the human body.

It wasn’t possible 500 years ago to actually make many of the things he invented and made detailed sketches of, so it’s only in recent years that people have had the tools and materials to try them out. Most of these inventions work. Italian President Sergio Mattarella (left) and French President Emmanuel Macron visit the tomb of Leonardo da Vinci to commemorate the 500th anniversary of his death, at the Saint-Hubert Chapel of the Chateau d’Amboise in Amboise, France on May 2. Picture: AFP

EARLY YEARS
Leonardo lived from 1452 to 1519. He was Italian, from a village near Vinci. In fact, his name was just Leonardo and the words da Vinci mean of or from Vinci.

From the age of 14 he began a nine-year apprenticeship to a painter, sculptor and goldsmith named Verrocchio. This studio in Florence, Italy, was a busy place with lots of thinkers, artists and skilled tradespeople working around him. Though he probably spent years doing odd jobs such as tidying up, running errands and mixing paints, he could listen to all the things everyone discussed and start forming his own ideas.

Leonardo’s earliest surviving drawing is a pen and ink sketch of the nearby Arno River. And though this wasn’t drawn until 1473, when he would have been about 18, he probably sketched scenes and ideas long before this.

ALL ROUNDER
Some people call Leonardo a polymath. This means someone who is a genius in many, or all, areas of thinking.

Leonardo is also called a Renaissance man, which means a similar thing to polymath.

The Renaissance is the name for a time in history from about 1400 to 1600 when huge advances were made in knowledge, including about science, the arts and technology. Leonardo is seen as one of the leading geniuses of the Renaissance.

People also use the term Renaissance man to talk about people who live or lived at times other than during the Renaissance. It’s a compliment, meaning the person is smart, a good all rounder, a modern thinker, willing to try new things and not stuck in the past.

GREATEST HITS
Leonardo was so prolific* you’d need all day to read about the hundreds or even thousands of amazing ideas he had. We’ve picked five of his greatest achievements. Part of the Mona Lisa by Leonardo da Vinci.

MONA LISA
The Mona Lisa is the world’s most famous painting.

The small oil painting is owned by the French government and displayed behind bulletproof glass in the Louvre in Paris, France. It is labelled as Portrait of Lisa Gherardini, wife of Francesco del Giocondo.

People have always been fascinated by how Leonardo made his subject’s face so interesting: is she smiling or smirking, happy or sad? Like humans in real life, no one really knows how she was feeling. LAST SUPPER
This is Leonardo’s only surviving mural. He painted it between 1495 and 1498 for a monastery in Milan, Italy.

It shows Jesus and his 12 Apostles eating a meal in a scene from the Christian bible. In the story, Jesus declares that one of these men will betray him. Leonardo used posture, gestures and facial expressions to show the personality and intentions* of each of the men. 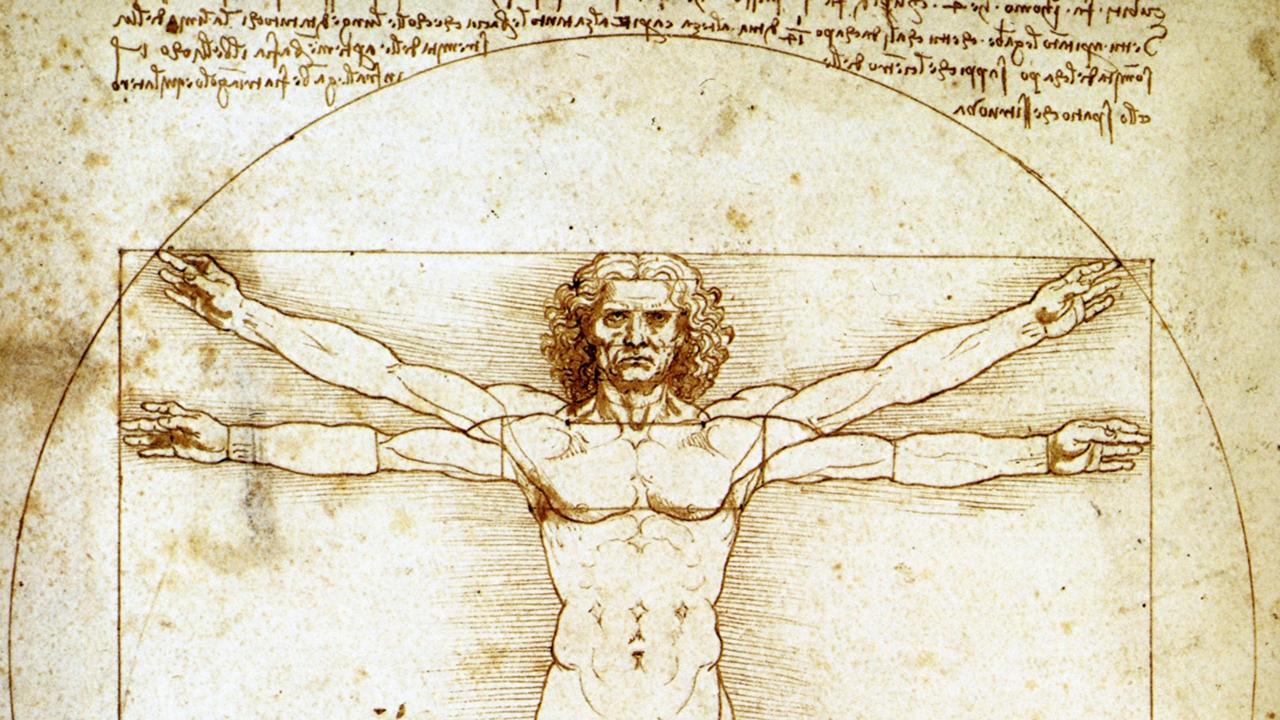 Part of Leonardo da Vinci’s Vitruvian Man drawing, which is surrounded by his notes on proportions in the perfect human body.

VITRUVIAN MAN
Leonardo made this ink drawing in about 1490. It is kept in a museum in Venice, Italy and is too fragile to be on display. Leonardo da Vinci made hundreds of drawings and many notes about the anatomy of the human body, which was a mystery to everyone else at the time.

ANATOMY
Leonardo had permission from hospitals to study the bodies of people who had recently died. He made more than 240 detailed drawings of the human body, how it worked and what happened when it aged, was weakened by disease or the person felt strong emotions. He wrote more than 13,000 words on the subject.

Unfortunately, Leonardo didn’t publish this work and it took many years for the rest of the world to rediscover what Leonardo already knew. A diagram by Leonardo da Vinci of an invention he called a “Manual lever winch”, long before anything like this was able to be made. Picture: AP

FLYING MACHINES
Leonardo dreamt of helping humans to fly. He studied birds and invented many flying machines, including a type of helicopter and a plane with flapping wings, called an ornithopter. He drew his ideas but it wasn’t until a 2003 UK documentary that some of them were built. Some worked and some didn’t! Leonardo da Vinci dreamt that he could invent a machine to help humans fly. This is a modern drawing of his ornithopter, a bit like a hang glider but with flapping wings.

NASA next stop for mini inventor

CLASSROOM ACTIVITIES
1. Greatest Achievements
Choose one of Leonardo’s greatest achievements and reflect on it by making some observations based on the following prompts:

2. Extension
Describe the best way for a polymath to learn as Leonardo did.

Would you suggest a conventional university course, an apprenticeship or another way of learning you think might best be able to use his creative and highly intelligent thinking skills. How could schools incorporate different learning to cater for high-level thinkers in this modern day?

HAVE YOUR SAY: What invention, painting or idea of Leonardo’s do you like best?
No one-word answers. Use full sentences to explain your thinking. No comments will be published until approved by editors.