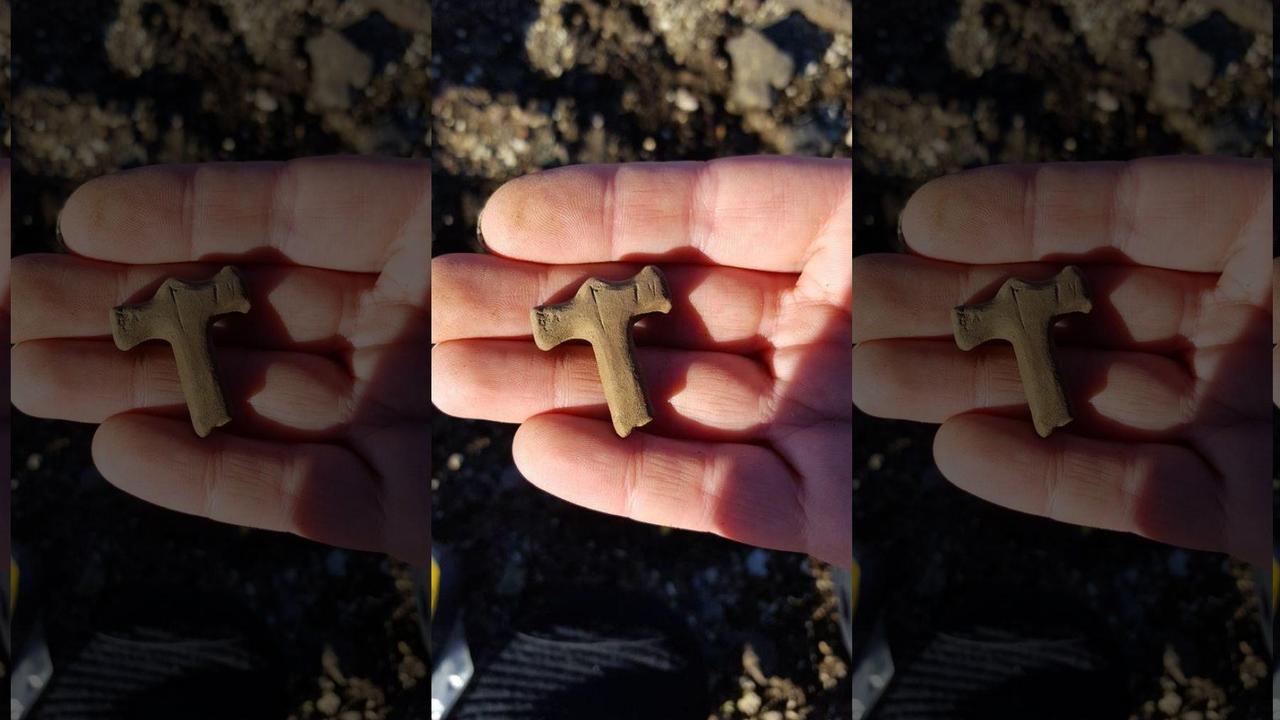 A rare Viking “Thor’s hammer” pendant* possibly 1000 years old has been found on a farm in Iceland.

The pendant, also called an amulet, which would have been worn around the neck on a string, perhaps made of leather, is the first sandstone “Thor’s hammer” discovered in Iceland. It is about the size of a coin and carved from sandstone.

The archaeologists also found a “whet”, which is used for sharpening blades, an iron pick and a buckle, according to Iceland Magazine. WHO WERE THE VIKINGS?
The Vikings were the people who came from the cold northern hemisphere region that is now Scandinavia — modern-day Denmark, Sweden and Norway — from about the year 700 to 1100. They were longboat sailors who visited other lands such as Iceland, modern-day UK and Ireland.

Some Vikings were peaceful farmers who grew crops and kept animals. It is thought the site where the artefacts were found was once a Viking farm.

There was also a strong tradition of beautiful metal and wood craft in Viking culture.

Other Vikings were fearsome warriors who raided other settlements, stealing things to take home. Vikings spoke a language called Old Norse and in this language, Viking means pirate.

VIKING INVASION
There was a huge Viking invasion of the land that is now the UK in the year 865. Instead of just raiding, this time the Vikings wanted the land for themselves. English armies battled the Vikings but by 874 almost all of England and Wales and part of Scotland was lost, except for one area in the west.

Names of cities and villages in the UK today that end in -by, -thorpe or -ay are likely to be originally Viking settlements. WHO WAS THOR?
Vikings were pagans*. Ancient pagans believed there were lots of gods and goddesses with supernatural powers.

Thor was one of the most important Norse* gods. Vikings believed Thor was the god of the sky, weather and thunder. He used a big hammer, which was called Mjolnir, for fighting giants. Ancient Greeks also believed in Thor.

A Thor’s hammer worn around the neck as a pendant in Viking times could have been something like a Christian wearing a cross necklace. This is actor Travis Fimmel from a TV series called Vikings. Vikings were from Scandinavia and wore furs to keep warm through the long winters. Picture: supplied The Gokstad Ship at The Viking Ship Museum, Bygdøy, Norway. This ship was built around the year 890 and was found by two boys in 1879. Picture: Johan Berge

CLASSROOM ACTIVITIES
1. Mind map
Use the information in the article to create a Mind Map about Vikings. A Mind Map is a diagram used to link information known about a particular topic or theme.

Begin with the word VIKINGS in the centre of your page (you may circle this if you wish). From there, draw lines off at different angles and directions and add information you know (or can assume) about Vikings. For example — what do you know about their beliefs, their way of life, what they ate?

You may like to continue your research and find out more about Vikings to add to your Mind Map.

2. Extension
Imagine you were the person who found the pendant. Write a letter to the original owner telling them where you found it (what the area is called now), how you think it came to be there, what you know about the pendant and what it tells you about Viking life. Also ask the owner anything else you would like to know about their life. You might like to explain a little about your life and how it is vastly different from what they would have experienced.

HAVE YOUR SAY: Have you ever found buried treasure? What would you like to uncover?
Use full sentences to explain your thinking. No one-word answers.