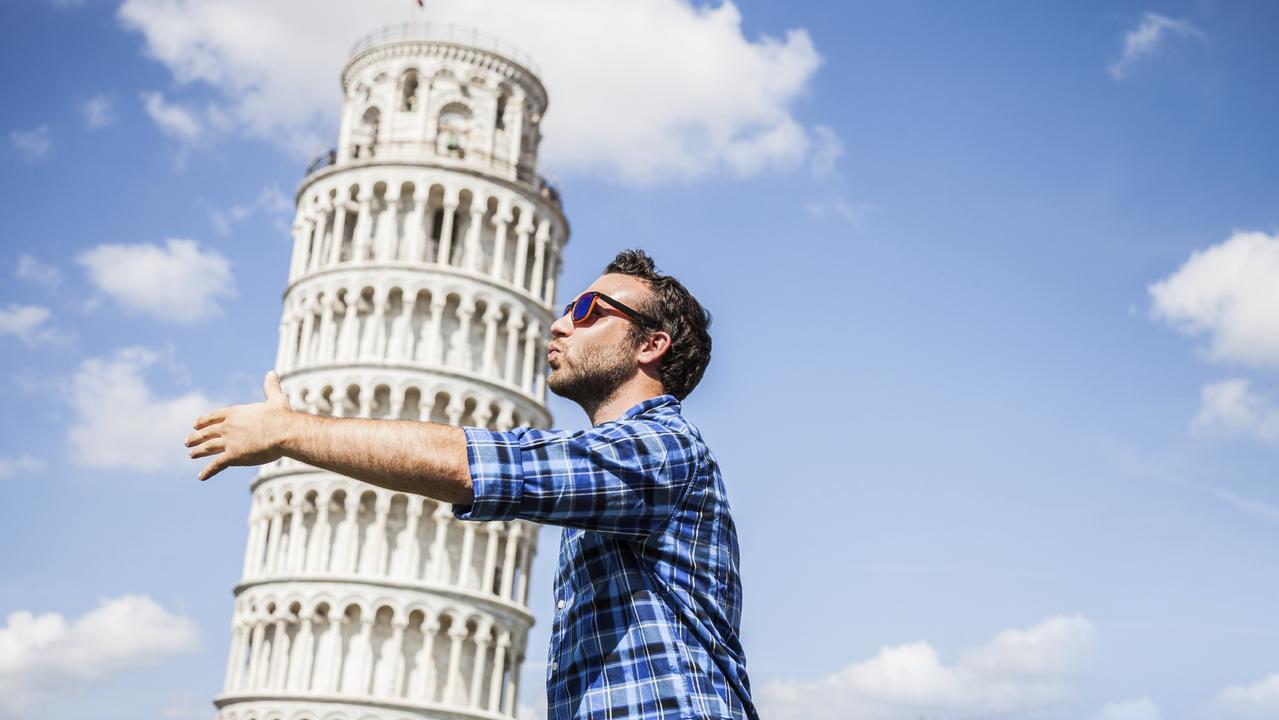 A popular way for tourists to photograph the Leaning Tower of Pisa. Picture: iStock

The Leaning Tower of Pisa isn’t leaning so much anymore.

Experts have revealed the world-famous tower in Italy has lost 4cm of its tilt* and is no longer in immediate danger of falling over.

At one point it was feared the white marble 56m tower would crash to the ground, but a series of restoration* projects over the past two decades has halted the slant and it is now thought to be reasonably stable. Tourists at the Leaning Tower of Pisa in Italy. Picture: AFP

A team of specialists led by professor Nunziante Squeglia, a geotechnics* expert at the University of Pisa, have announced the findings after a 17-year study.

He said the tower’s health was better than forecasted, and added “the stability of the bell tower is more than expected”.

Cables were used to secure the monument* and the stairs, which offer tourists a breathtaking view of the rolling Tuscan countryside.

The lean is as old as the tower itself, having crept in five years after construction* began in 1173.

The layer of clay and sand the tower is built on is softer on the south side than the north — so by the time builders got to the third storey, shifting soil had unsettled its foundations. It’s lean at that time was about 11 degrees. The leaning tower of Pisa began to sink after construction had progressed to the second floor.

Since it was built it has survived four major earthquakes and experts say its lean is now just under four degrees and it is off centre 4m from vertical.

Giuseppe Bentivoglio, from the Opera Primaziale organisation that preserves the tower said: “It was on the verge of collapse, but we managed to stop the tilt and secure it.”

More than a million people a year visit the tower, which is a UNESCO* World Heritage site.

Mystery of the pyramids discovered at last

1. Which country is home to the tower?

2. How tall is it on its tallest side?

4. How much is it leaning now?

5. It was closed to the public for how many years?

CLASSROOM ACTIVITIES
1. Measure this
There are lots of building measurements and facts and figures given in the article about the Leaning Tower of Pisa. Use these figures to write some mathematical questions for a classmate to solve. Your classmate will need to read the article as well to answer the questions. Make sure you are able to solve your questions and keep the answers with you so your classmate can check their work.

An example could be — What is the difference in height of each side of the tower?

Write at least 5 questions. Then swap with a classmate to solve their questions.

2. Extension
Use construction materials that you have available to create a scaled down model of the Leaning Tower of Pisa. Construction materials you might have to use could be craft sticks, toothpicks, recycled cardboard and plastic boxes, plasticine or a combination of these or other materials.

Create your tower so that it has a lean similar to the real tower (use the information in the article to help you determine how far to make your tower lean). Hopefully you don’t need supports to keep your tower from falling!

HAVE YOUR SAY: Have you ever seen the Leaning Tower of Pisa or another famous overseas monument. What did you like about it?
No one-word answers. Use full sentences to explain your thinking.