King Tutankhamen’s golden death mask, which is housed in a Cairo museum. Now his golden sarcophagus will be restored for a new Egyptian museum.

King Tutankhamun’s sarcophagus* has been removed from his tomb so it can be restored for the first time since its discovery 100 years ago — sparking* fears of a deadly curse*.

The Egyptian boy king’s gold-plated wooden coffin and thousands of artefacts* from his tomb are being restored by archaeologists*. They will become the centrepiece of the new Grand Egyptian Museum opening next year near the Pyramids of Giza.

But, according to The Sun in London, many believe King Tut’s remains are cursed after the opening of his tomb in 1922 was followed by a string of deaths involving people linked to the project.

A discovery earlier this year added to the rumour of the curse when workers trying to preserve the tomb found ancient writings on parchment* paper jinxing* people and calling for curses on others.

Now, with the coffin being moved, there are fears within the archaeological* world that the curse could strike again. 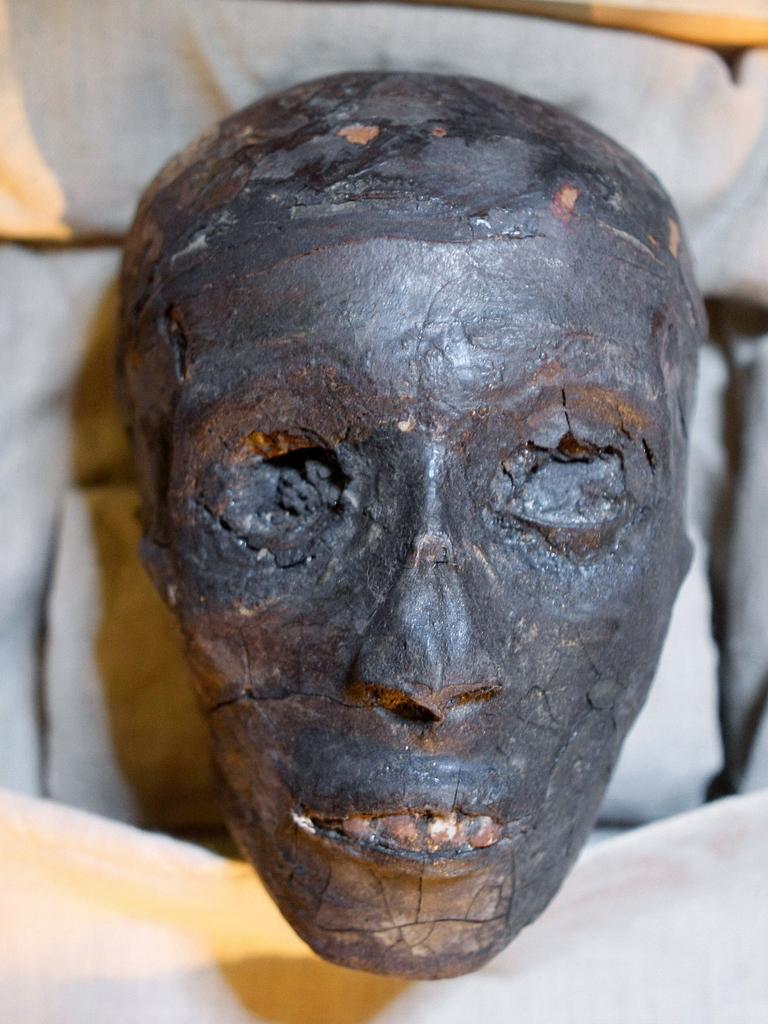 The mummified face of King Tut on display in a climate-controlled case at his tomb in the Valley of the Kings.

Egypt’s Ministry of Antiquities* said the coffin was transported from King Tut’s tomb in southern Egypt to the new museum last week “in order to be restored for the first time since the tomb’s discovery”.

“The coffin has suffered a lot of damage, including cracks in the golden layers of plaster and a general weakness in all golden layers,” said museum expert Eissa Zidan.

Restoration work on the coffin will take about eight months, he added. It was the only sarcophagus left in King Tut’s tomb after the two other coffins of Tutankhamun were moved to the Egyptian Museum in Cairo’s Tahrir square in 1922.

He is most famous for his age — experts believe the boy was just 10 years old when he took control of the world’s most powerful empire*.

His death aged just 19 has puzzled experts for decades. Some believe he died of a broken leg or other accident, while others suspect he was assassinated*. A computer illustration showing the layout of King Tut’s tomb.

IS THE KING TUT CURSE REAL?

British archaeologist Howard Carter discovered and opened King Tutankhamun’s tomb in the Valley of the Kings in Luxor in 1922.

The tomb was untouched and included about 5000 artefacts.

Its discovery attracted international headlines and media began to travel to Europe to learn more. Soon afterwards, stories about a deadly curse on the tomb began to spread.

It is not known if the story spread because the curse was true or if someone from the excavation* party was trying to scare the media away.

However, when archaeologists, and even some of their family members, died from horrible illnesses or in strange accidents in the years following the tomb’s opening, the legend of the curse grew.

Howard Carter, however, lived for 17 years after opening the tomb, which made others have doubts about the curse.

Whether real or not, these are some the deaths linked to the tomb’s discovery:

Lord Carnarvon (died April 5, 1923) — the person who paid for the archaeological dig, died from an infected mosquito bite.

Prince Ali Kamel Fahmy Bey (died July 10, 1923) — an Egyptian prince who visited the tomb and soon after was shot and killed by his wife.

Colonel The Hon. Aubrey Herbert, MP (died September 26, 1923) — the half-brother of Lord Carnarvon, he died from blood poisoning after he had some dental work.

Sir Lee Stack (died November 19, 1924) — the Governor-General of Sudan and an excavation team member was assassinated while driving through Egypt’s capital, Cairo

The Hon. Mervyn Herbert (died May 26, 1929) — another half-brother of Lord Carnarvon, died from malarial pneumonia.

* This story first appeared in The Sun and is republished with permission.

Mystery of the pyramids discovered at last

CLASSROOM ACTIVITIES
1. Museum artefact label
Have you ever visited a museum? If you have, you might recall seeing labels at each of the displayed items, telling you about them. Create a label that could be displayed alongside King Tutankhamun’s coffin when it becomes the centrepiece of the Grand Egyptian Museum.

Your label should contain a title, what the item is made of, what it was used for, important dates in its history and other information that you think is interesting for museum visitors to know.
Keep your label factual and use formal language.

2. Extension
Work with a partner for this activity. One of you is to pretend to be the manager of the Grand Egyptian Museum; the other will play a superstitious museum employee.

The manager asks the employee to assist with cleaning of the Tutankhamun display however the employee is worried about the curse.

HAVE YOUR SAY: Do you believe the listed deaths were from King Tut’s curse or just a coincidence? Why?
No one-word answers. Use full sentences to explain your thinking. No comments will show until approved by editors.