Mila and Hugo, both seven, in their Akubras. The classic Australian hat has been honoured with its own $1 coin as part of Australia Post’s Great Aussie Coin Hunt. Picture: Australia Post/David Swift.

Mention the words “MILO moustache” and many Australian kids will know exactly what you mean. A feature of Aussie childhood for generations, comparing MILO milk moustaches around the dinner table is an activity the whole family can enjoy – particularly because your parents probably did it when they were kids too.

So it is little wonder that MILO has been formally recognised for its place at the table in Australia Post’s Great Aussie Coin Hunt, an A-Z of top Aussie icons featured on $1 coins, currently available at participating post offices, the Australia Post website and in your change. Along with flora, fauna and some of Australia’s most outstanding landmarks, MILO joins a collection of cracking homegrown inventions, including some of the country’s all-time favourite chocolate treats. The limited edition full-colour Great Barrier Reef coin, which is hidden inside 17,000 of the rolls containing all 26 of the A-Z collection of Aussie icons. The rolls are available while stocks last at participating post offices and from the Australia Post website. Picture: supplied.

The business moved to the big smoke in Sydney in the early 1900s and was renamed Akubra in 1912. Dunkerley’s daughter Ada married company employee Stephen Keir and in 1925 business ownership passed to Keir. Akubra remains owned and operated by the Keir family to this day.

There are 162 steps in the production process and each fur felt hat passes through more than 60 pairs of hands.

“Akubra is a fifth-generation Australian business and it’s a grand honour to have our brand minted for the first time in history,” spokesman Andrew Angus said.

“The Akubra hat has become a worldwide phenomenon and we’re also proud of our Slouch hat worn by men and women who travel abroad and protect our country.”

Akubras have appeared on the small and big screen, most famously in Crocodile Dundee. The film launched the Croc hat, which is still made today, and Australian Olympians have worn Akubras as part of their uniform several times. 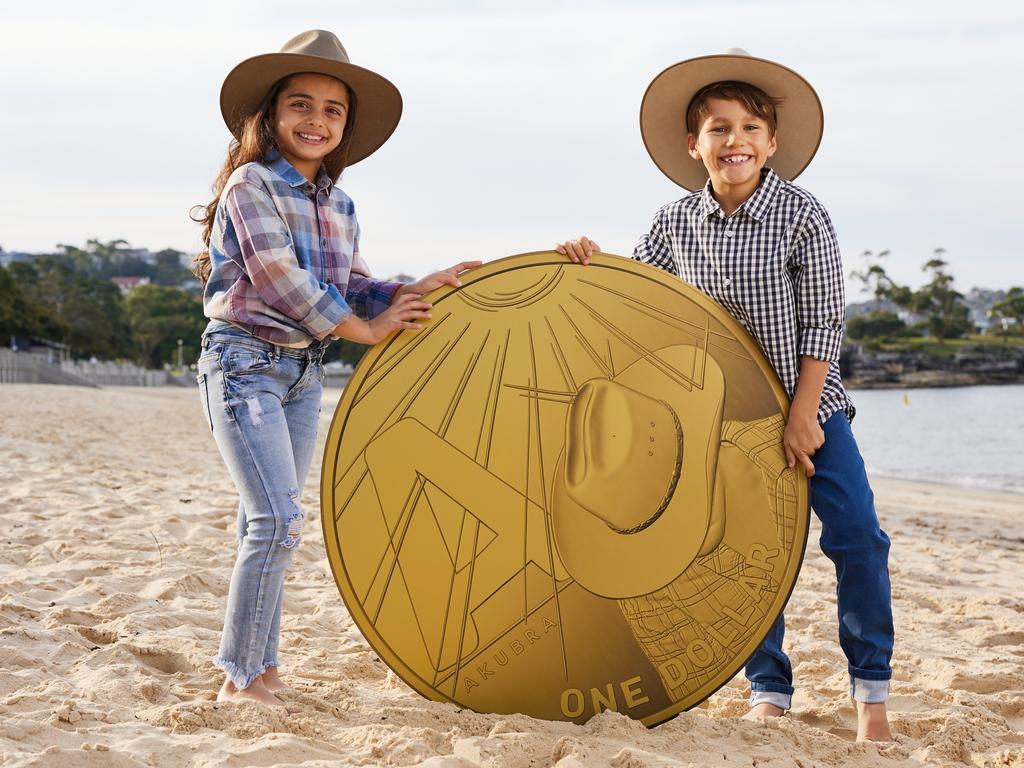 Mila and Hugo, both seven, in their Akubras with a giant version of the coin. Picture: Australia Post/David Swift.

Nearly a century old, the Cherry Ripe is one of Australia’s oldest and best loved chocolate bars. Paul Chatfield, Cadbury senior marketing director, said production of the classic combination of cherries, coconut and dark chocolate began in Melbourne in 1924.

“Cadbury Cherry Ripe was the idea of a man by the name of Leslie Atkinson, who started his career in the old roasting room at MacRobertson’s Steam Confectionery Works in Fitzroy, (Victoria), where cocoa beans and nuts were roasted,” Mr Chatfield said.

Atkinson rose through the ranks to become a top MacRobertson executive and Australia was rewarded with a delicious, decadent* chocolate now recognised with its own freshly minted coin.

“Cherry Ripe joined the Cadbury family in 1967, and production shifted to its current home in Ringwood. Despite being almost 100 years old, Cadbury Cherry Ripe remains one of the most popular chocolate bars available on Australian shelves,” Mr Chatfield said.

Even superstars Nicole Kidman and Keith Urban are big fans. During lockdown last year, US-based Urban told The Project’s Carrie Bickmore that being down to their last Cherry Ripe was spurring the couple’s desire to get back to Australia.

MILO is named after the 6th century BC Greek wrestler, Milo of Croton, who was famed for his legendary strength, which might explain why MILO has been supporting sports for kids for generations, from snow sports, to cricket, football and most recently AFL.

More than 13,000 tonnes of MILO are made in the MILO factory in New South Wales each year, which equates to 20 cups made every second in Australia and New Zealand.

“For MILO to have its own $1 coin this year is incredibly special and … we hope Australians of all ages have fun hunting, collecting and sharing their MILO coins,” said Nestlé Dairy business manager, Anna Stewart.

Debate has raged across the nation since MILO made its debut in 1934 on whether the crunchy choc-malt drink is best using hot or cold milk. In MILO’s survey of more than 90,000 people, 65 per cent voted for cold milk – a decisive victory! Tim Tam trivia is almost as good as the unbeatable biscuit itself. Michael Depalo – an employee of Arnott’s for the past 40 years affectionately known as the ‘Arnott’s Encyclopaedia’ – is just the man to ask for the inside word.

For instance, did you know that the universally* popular Aussie chocolate biscuit was apparently named after the horse that won the 1958 Kentucky Derby in the US?

“Arnott’s Tim Tam is an Australian icon and is over 55 years old,” Mr Depalo said. “First made in the 1960s, our beloved Tim Tam begins its journey in our Adelaide bakery, where three types of chocolate are made, before being transported to Arnott’s Sydney bakery by road and railway.

“Here, around 3000 Tim Tam biscuits per minute are baked, constructed and packed, resulting in over 670 million biscuits being made and consumed by Aussies every year.”

Pre-pandemic, one in three Australians took Tim Tam biscuits with them when travelling overseas – and why not? They are the perfect affordable Aussie gift: made in Australia using Australian made chocolate.

Mr Depalo said seeing the Tim Tam on the $1 coin “feels like the perfect honour for our humble yet indulgent biscuit.”

“Tim Tam is part of the fabric of Australian society and is embedded* in what it means to be an Aussie. Just like our coins, we believe it to be a gifting and sharing currency of its own. What more could you wish for than being on a national coin?”

The Victa Lawnmower has been cutting Aussie lawns since 1952, when the first prototype* was made in a garage by Mervyn Victor Richardson using scrap metal and a peach tin. While not the first lawnmower ever invented, the Victa was lighter and more powerful: perfect for Richardson’s son Garry, who mowed lawns to earn money during university holidays.

Nearly 70 years later, the lawnmowers are so iconic that they took centrestage in the Sydney 2000 Olympics Opening Ceremony, viewed by more than 2 billion people around the world.

Today, examples of the 1959 and 1968 models can be seen at the National Museum of Australia. There are few people in the world that can compete with Aussies for the sheer odds of copping a bad sunburn. Zinc has been part of the Australian defence against harmful rays since becoming widely available as a sunscreen in the 1940s, but the active ingredient that gives the cream its name – zinc oxide – has been in service as a sunscreen for centuries.

Australians have long embraced zinc and our athletes have liberally applied it during competition as a kind of tongue-in-cheek warpaint, including cricket greats like Andrew Symonds, Ellyse Perry and Shane Warne.

Coloured zinc is also a hit at school sports days, where kids can show off their team colours. Using zinc as face paint is fun, but skin cancer is no laughing matter. Zinc acts as a physical barrier from the sun and works by reflecting and scattering UV rays, as opposed to absorbing them like chemical sunscreens.

The Aussie landmark coins to flip over

CLASSROOM ACTIVITIES
1. Maths Challenge
Use information from the news story, your problem-solving skills and a calculator to help you figure out these challenging maths questions:

2. Extension
Challenge a friend. Set a timer for 3 minutes. Choose a letter of the alphabet. Each person must write down as many “Aussie” things as they can before the timer ends. Score 1 point for answers you both have and 2 points for any unique answers. The player with the highest score wins. Play as many rounds as you like.