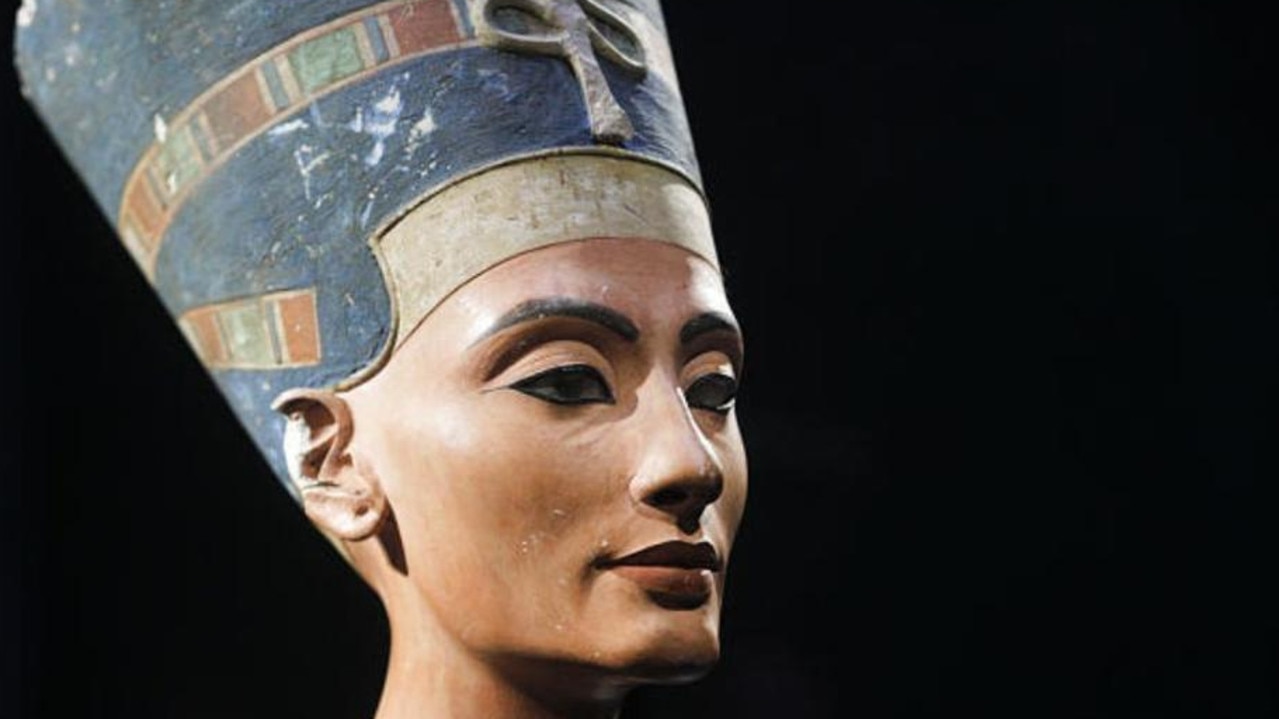 The incredibly well-preserved sculpture of Nefertiti’s head. The artefact is on display in Neues Museum, Berlin, Germany.

A hidden chamber near the tomb of Egypt’s King Tutankhamun may contain the long-lost remains of Queen Nefertiti.

Scientists found the chamber close to Tutankhamun’s burial complex in Egypt’s Valley of the Kings.

The final resting place of Nefertiti, who was queen alongside Pharaoh Akhenaten more than 3000 years ago, is one of Egypt’s greatest mysteries.

It’s believed she was the mother of King Tut’s wife and that she briefly ruled Egypt after the death of her husband in 1335BC. Some believe she was Tut’s mother, rather than mother-in-law.

Archaeologists have never found her remains and one theory is that she was buried in a secret compartment within Tut’s tomb. 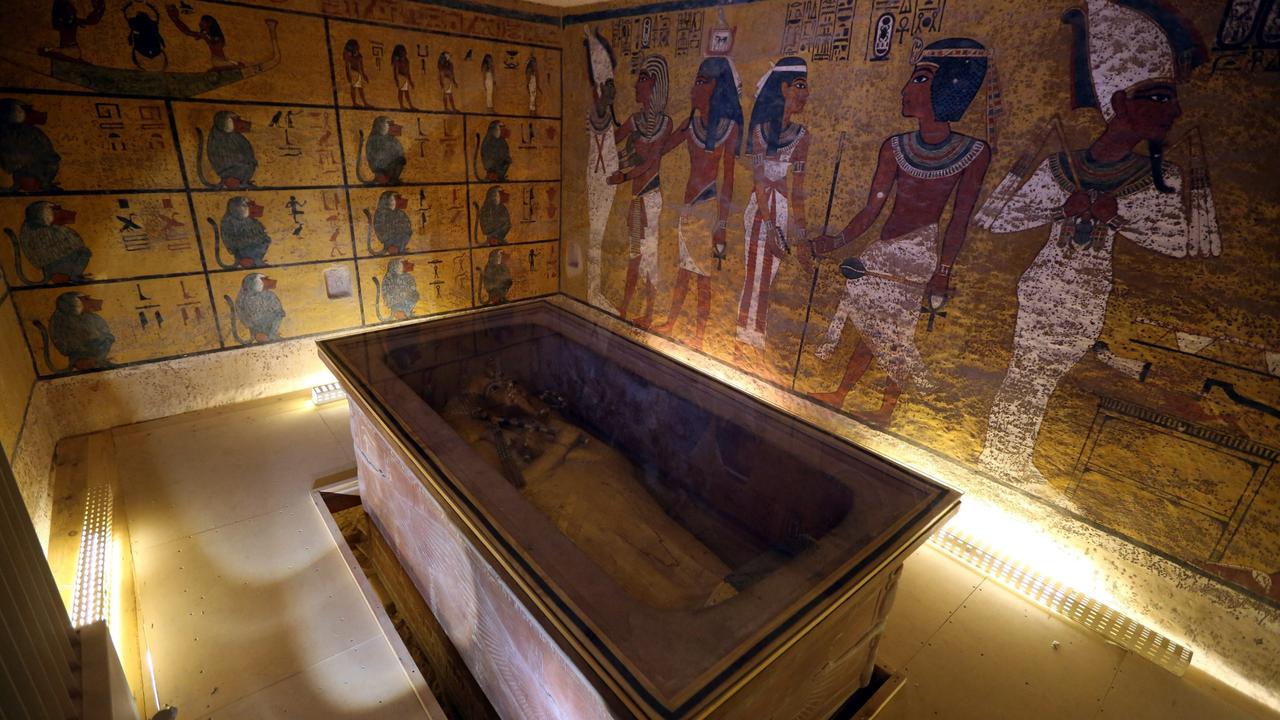 An interior view of the King Tutankhamun burial chamber in the Valley of the Kings, Egypt. Radar scanning inside this tomb has indicated there could be a separate tomb attached, which could hold the remains of Queen Nefertiti. Picture: EPA/STR

Nefertiti became famous following the discovery of an incredibly well-preserved sculpture of her head. The artefact* is on display in Neues Museum, Berlin, Germany.

It is thought she was born around 1370BC and died around the age of 40.

Tut died aged just 19 and his burial complex is small for a monarch*, leading some experts to speculate* that parts of it remain undiscovered. Dr Ray Johnson, an Egyptologist at the University of Chicago, US, who wasn’t involved in the research, described the discovery as “tremendously exciting”.

“Clearly there is something on the other side of the north wall of the burial chamber,” he told Nature.

The study was led by archaeologist Mamdouh Eldamaty, a former Egyptian minister of antiquities*.

A new technology called ground-penetrating radar, which uses radar pulses to see through soil and rock, was used to scan around Tut’s tomb.

There’s no proof yet that what they found really is a hidden chamber – let alone that it contains Nefertiti’s tomb – but the possibility is exciting to Egyptologists*.

The finding was presented to Egypt’s Supreme Council of Antiquities (SCA) earlier this month. 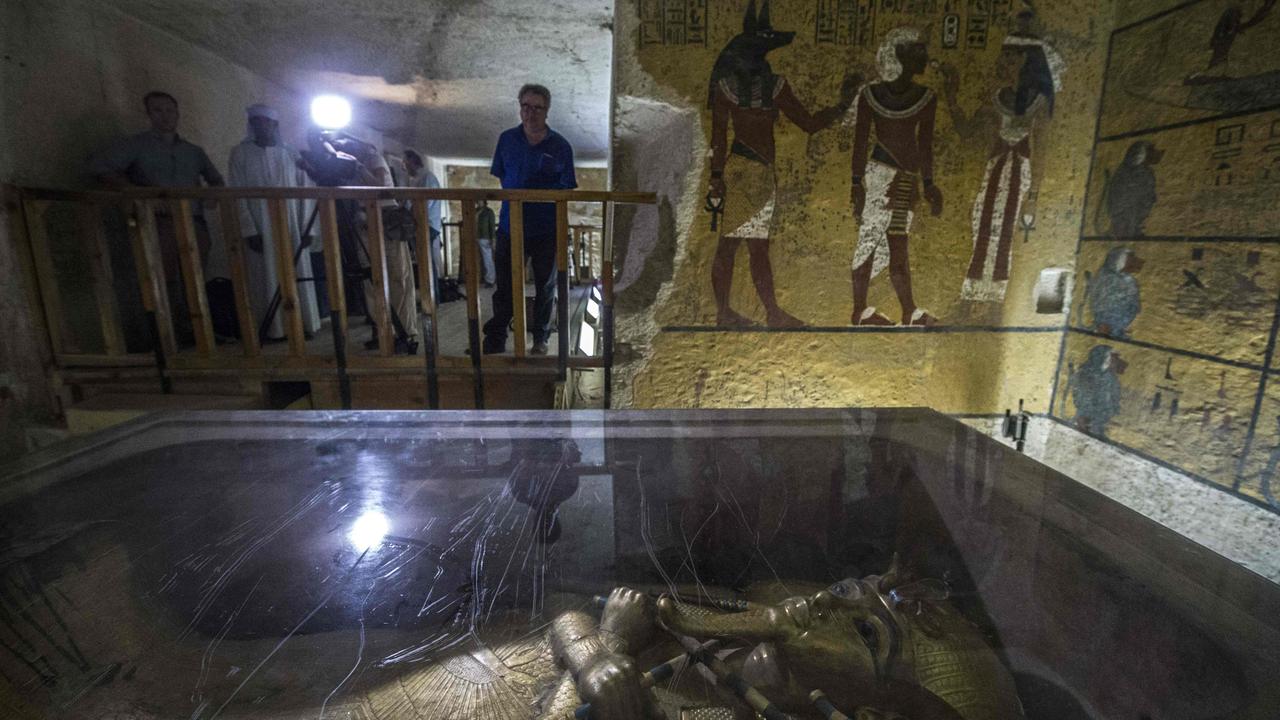 The golden sarcophagus (stone coffin) of King Tutankhamun in his burial chamber at the Valley of the Kings, taken in 2015. Picture: AFP A close-up of the sarcophagus, which is a stone coffin, of King Tutankhamun displayed in his burial chamber. Picture: AFP

This is not the first time the possibility of extra chambers in Tut’s tomb has been explored by scientists.

Several teams, often working with private companies, claim to have found evidence of secret compartments behind the underground structure’s walls.

However, these discoveries are often contradictory* and inconclusive*.

In 2017, Francesco Porcelli, a physicist* at the Polytechnic University of Turin in Italy, led a ground-penetrating radar survey that concluded the tomb contained no concealed rooms.

“We conclude, with a very high level of confidence, that the hypothesis concerning the existence of hidden chambers adjacent (to) Tutankhamun’s tomb is not supported by the GPR* data,” researchers wrote in their study.

It is not yet known whether the newly found space is linked to King Tut’s burial chamber or another nearby tomb.

Eldamaty and his team believe the spot is part of the Tut complex because it’s positioned perpendicular* to the tomb’s main axis*.

Unconnected tombs tend to be aligned at different angles.

The theory that Nefertiti’s tomb is hidden inside Tut’s is a controversial one.

Investigations of secret chambers within other Ancient Egyptian tombs have often found they were simply tunnels used by the grave’s builders.

Mystery of the pyramids solved at last

CLASSROOM ACTIVITIES
1. Predict the news!
It has not been confirmed if there are in fact, extra chambers and it is unknown exactly what they contain but there are some theories about what might be in there. There will undoubtedly be more research to discover if these chambers are there and what is in them.

Pretend you are a news reporter. Write an article for Kids News or write a script for a TV news reporter to announce if the chambers have been found and what was in them. You will need to include some background information (found in this article) to say why archaeologists were looking in this area and what they believed might have been in there. You will then need to share the findings of their further research. Remember to use interesting vocabulary to interest your readers or viewers.

Edit and publish your written article or rehearse and present your TV news report to the class.

Read through the article and note down pieces of information in a table that fit under each of the following headings.

KNOWN FACTS, LIKELY TO BE TRUE and STILL UNKNOWN.

HAVE YOUR SAY: Do you think this is Queen Nefertiti’s tomb?
No one-word answers. Use full sentences to explain your thinking. No comments will be published until approved by editors.