On August 19, 1919, aviators* and future Qantas founders Paul McGinness and Hudson Fysh, along with driver George Gorham, set out from Longreach, Queensland, in the latest Model T Ford hired from Longreach Motor Works.

They were on a mission for Australia’s Department of Defence to survey and prepare airstrip sites, ahead of a UK to Australia air race among Australia’s World War I airmen, all chasing a £20,000 prize and a ride home.

The three war veterans would spend 51 days travelling north to Burketown on the Gulf of Carpentaria, then west to Katherine, Northern Territory.

They drove along rough tracks designed for a bullock wagon rather than a primitive car. The tyres of the Model T were so damaged by thorns and sticks they stuffed them with spinifex. George Gorham makes a river crossing on the journey from Longreach. Picture: supplied

Little wonder that along the way, around the campfire at night, they hatched the idea of an air service.

By the time they reached Darwin, NT, a rough plan and an agreement to seek out investors and support for a Queensland and Northern Territory air service (Qantas for short) was settled. The drive (dotted line) the three men took in the Model T Ford from Longreach to Katherine in 1919. You can also see the original Qantas air route. Picture: Qantas Founders Museum

A century later, on Monday, August 19, the Qantas Founders Museum at Longreach will celebrate the centenary of that journey, with museum curator Tom Harwood and buildings maintenance manager Bruce Searles dressing up like its 1919 and taking the museum Model T Ford “Molly” for a tour of the town — visiting schools, kindergartens, tourist and historic spots. Though not the vehicle used for the trek, it is the same year model.

Ahead of the quirky town tour, Mr Harwood said he had taken Molly on a practice drive.

“We went out to the Visitor Information Centre, and out to the river, to the free camping area out there; just a little cruise around. It was a bit of fun!” Mr Harwood said.

Model Ts are hard to drive, with Car and Driver magazine comically* suggesting: “The odd position of the throttle, brake, and shifter make driving a Model T an archaic and dangerous experience. It’s like trying to do the Charleston* while loading a musket* after a big night at the speak-easy*.” 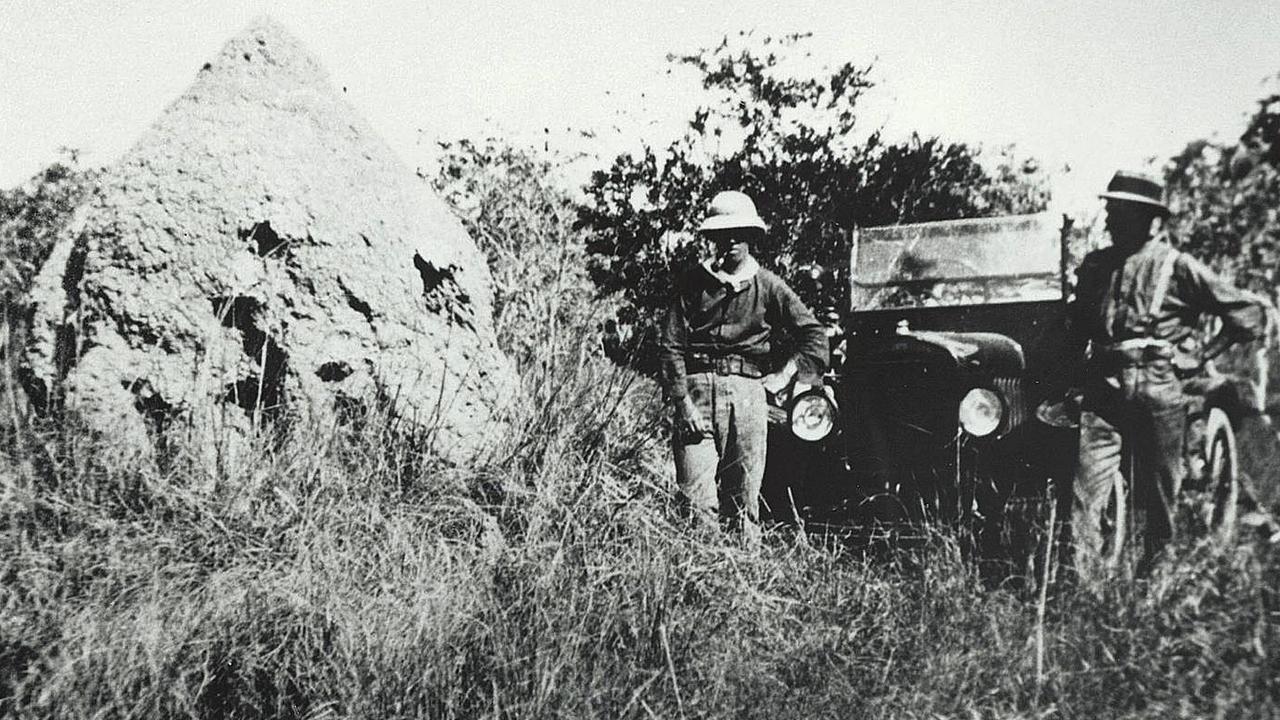 Stopping for a photo beside an anthill bigger than the car on the 1919 journey.

Mr Harwood said he had found the steering quite heavy.

“You tend to forget what cars feel like without power-steering, and in modern terms, it’s confusing, because the pedals are sort of backwards: the brake is on the right, the middle pedal is reverse, and the one on the left has the clutch halfway down, then all the way down is forward,” he said.

“Once you get going, you then let the pedal all the way out, and it drives. And the throttle* is actually a lever on the steering wheel.” Hudson Fysh recrossed the Gulf of Carpentaria later in 1919 in this Model T Ford, very similar to the car used on the first survey drive. Picture: Qantas.

The modern driver needs to concentrate more and plan ahead for intersections.

The vehicle offered some advantages for the expedition driver on the rutted* tracks and creek-crossing challenges of the 1919 journey.

“In many ways, this was the ultimate off-road adventure. The few roads that existed were normally used by steel-tyred horse-drawn coaches and bullock wagons and these blokes had to create their own tracks across rough country in a basic two-wheel drive car with no support services,” he said.

“They had a professional driver in George Gorham. He was a driver for New Zealand Loan before World War I, so he had a bit of experience driving cars around the countryside.

“The clearance is better than you get in a modern car: somewhere between that of an SUV and a four-wheel drive.”

The Qantas Founders Museum has tested the actual journey in the past. Molly the Model T Ford outside the Qantas Founders Museum at Longreach, Qld in 2009, heading off on the drive to re-enact Hudson Fysh’s and Paul McGinness’s 1919 trip.

“One of the Qantas pilots, and now a director of the museum, Don Hill, took Molly to re-enact that 1919 trip 10 years ago,” Mr Harwood said.

“It was the first time that anyone had driven some parts of that track in 90 years.

He said the 1919 drive was a significant moment in Qantas and Australia’s aviation history.

“This trip highlighted how remote and isolated outback Queensland and Northern Territory communities were and what a major impact an aerial service would have in the region.” 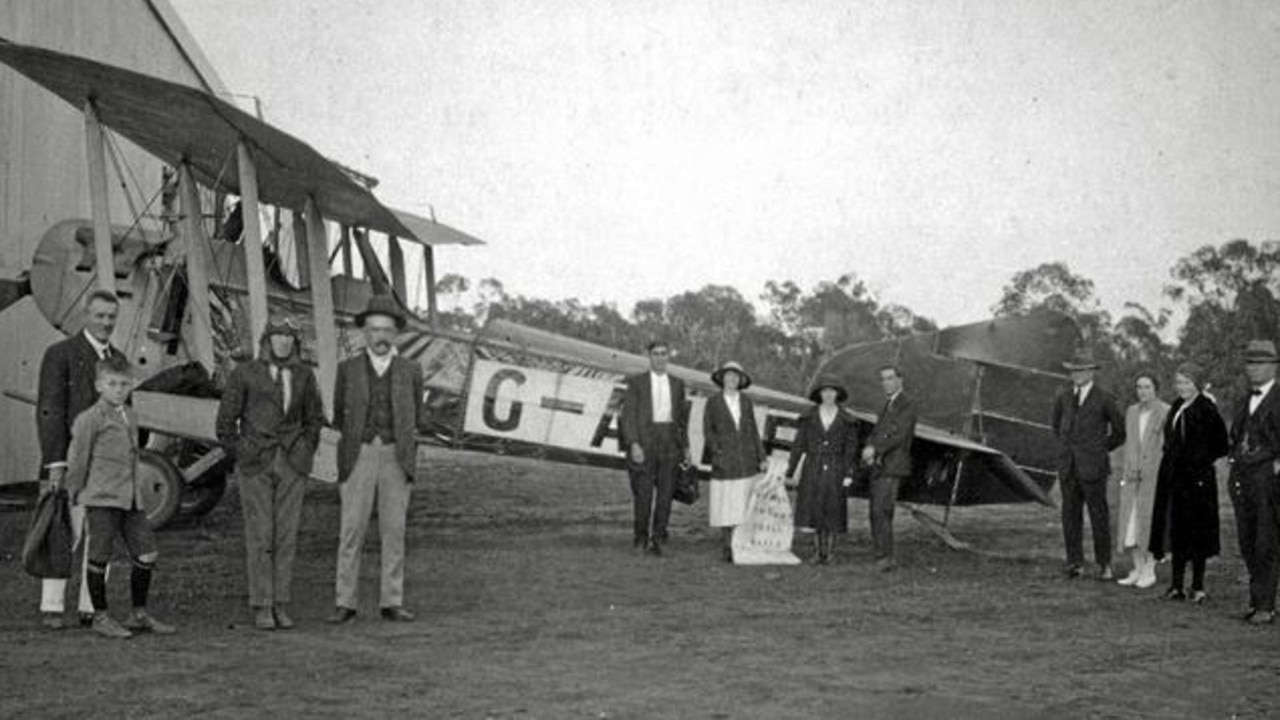 Paul McGinness (third from left) about to depart Charleville for the first Qantas passenger flight on November 2, 1922. Picture: supplied

2. Extension
Choose one of the locations on the original Qantas route to research. Record some information that you have found out. If you want an additional challenge, see if you can find out what the town was like 100 years ago and compare it to the town today.

HAVE YOUR SAY: Would you choose to do the 1919 car trip or the 1919 UK to Australia air race or the first Qantas passenger flight in 1922? Why?
No one-word answers. Use full sentences to explain your thinking. No comments will be published until approved by editors.