The Limited edition Aussie landmark coins to flip over 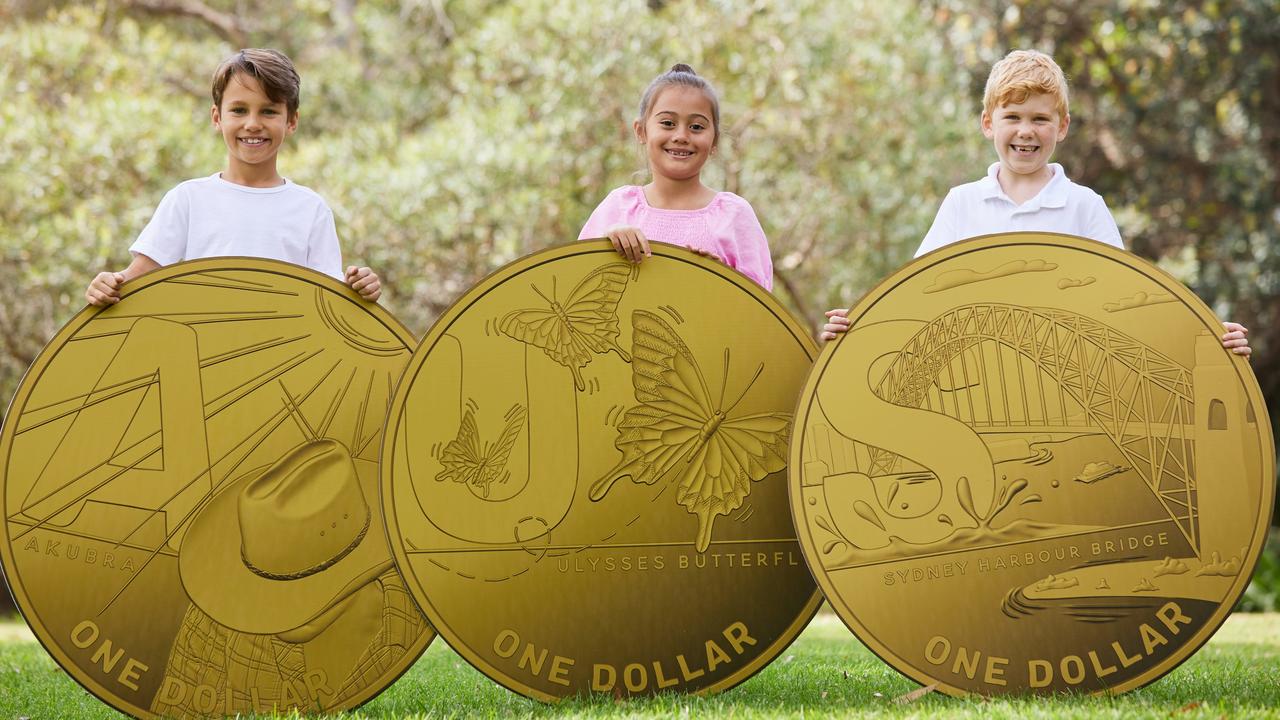 Archie, Mila, and Hugo, all 7, posing with giant versions of some of the coins included in the collection. Hugo said, “My favourite coin was the letter O for Opera House, because I love how cool the Opera House looks!”. Archie said, “The Sydney Harbour Bridge sounds like ‘Harper‘, my sister’s name.” Picture: Australia Post/David Swift.

Australians love a landmark. From our kitschy* collection of roadside Big Things to iconic structures and natural wonders coast to coast, we are a nation that loves to leave our mark as a way of making sense of the sheer size of this country.

And while you might think it would be hard to squeeze a giant landmark onto the face of a $1 coin, some of Australia’s most famous structures and natural marvels* are already circulating as part of Australia Post’s Great Aussie Coin Hunt, an A-Z of great Aussie icons including flora, fauna, favourite products and fabulous inventions – and of course the following top photo opp spots. 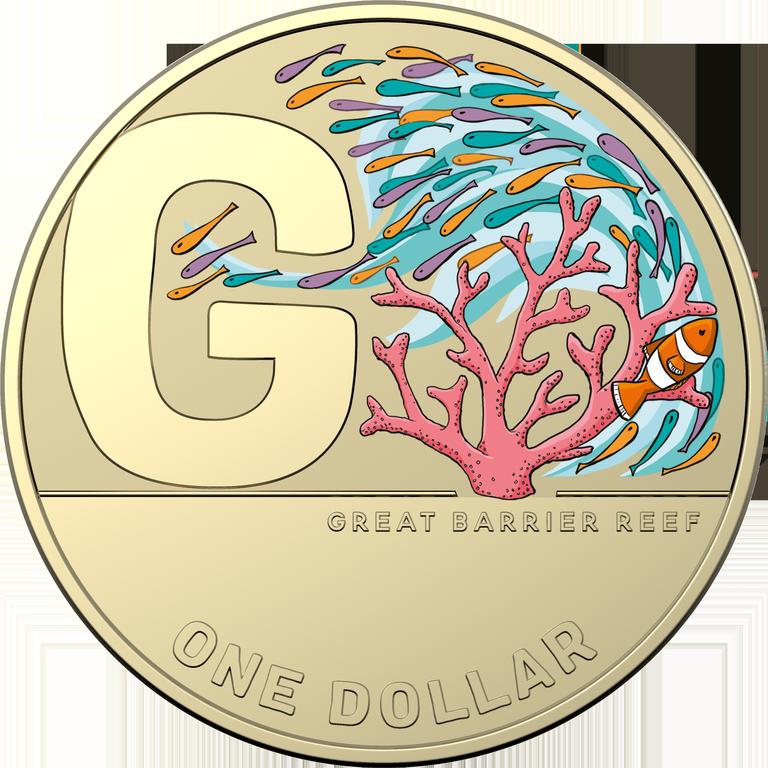 The limited edition Great Barrier Reef coin is hidden inside 17,000 of the tubes containing all 26 of the A-Z collection of Aussie icons, available while stocks last at participating post offices and from the Australia Post website. Picture: supplied.

The Great Barrier Reef plays a crucial role in the family film classic Finding Nemo, setting the scene for young clownfish Nemo’s abduction* by scientists at the start of his epic adventure. Stretching 2300 km off the coast of Queensland and comprising* nearly 3000 individual reefs, the Great Barrier Reef is the world’s largest coral reef system and is visible from space – no wonder it takes Nemo’s father Marlin the entire film to find him!

Now the hunt is on for another clownfish, this time captured on the G for Great Barrier Reef coin. Honouring this great natural treasure, the coin comes in two versions.

As well as the $1 gold coin, there is also a stunning full-colour version. Hiding in just 17,000 of the full A-Z rolls of coin, available nationally at participating post offices and online, the limited edition $1 coins have started hitting eBay with a whopping $350 price tag for the keenest coin collectors out there.

The Great Barrier Reef was World Heritage listed in 1981 and is one of the Seven Natural Wonders of the World.

Sydney’s Opera House and Harbour Bridge are hardly surprise choices, but Barrenjoey Headland is not nearly so well known – unless you call it Summer Bay.

The striking lighthouse marks the northern limit of Sydney, but that is not why this landmark is considered worthy of its own coin. In fact, the coin is not B for Barrenjoey at all, but H for Home and Away. The northern beaches suburb of Palm Beach is where the series has been filmed for its entire 34-year history.

Much like its interstate rival Neighbours, filmed in Melbourne, Home and Away has launched some of Australia’s biggest screen stars, including Thor himself, Chris Hemsworth.

Ray Meagher, who plays the show’s longest-running character Alf Stewart, said seeing the show royally minted was “very humbling” and said the cast and crew were “honoured and delighted”.

“It’s the whole show and everybody who’s ever been in it and our entire crew, production office, everybody is responsible for this honour,” he said.

Meagher believes the stunning location is part of the show’s enduring appeal – perhaps particularly for its huge fanbase in the UK.

“I think our locations are very, very appealing, that country town feel on the coast is pretty hard to beat in terms of a wonderful, relaxed, sunny, appealing lifestyle,” he said.

“Everyone’s very excited about it. It’s not every day that something you’re involved in very closely gets minted on a coin!” As well as being one of the most iconic* man-made buildings in the world, Sydney’s beloved Opera House is a cultural hub hosting hundreds of performances each year across comedy, theatre, ballet, classical and contemporary music, lively talks and of course opera. It has also become a canvas in recent years, displaying spectacular artworks and other projections – images that make headlines around the world.

Australia owes the unique and timeless beauty of the Opera House to Danish architect Jorn Utzon, who won an international design competition and went on to win the Pritzker Architecture Prize, architecture’s highest honour.

Opened in 1973 by Queen Elizabeth II, the Sydney Opera House is so big it could fit seven A380s sitting wing-to-wing on the site. Inside, the concert hall maintains a constant temperature of 22.5C to keep Sydney Symphony Orchestra’s instruments in tune.

Melbourne’s best known market in Australia’s unofficial ‘foodie capital’ has been “the heart and soul of the city for more than 140 years”, according to Queen Victoria Market CEO Stan Liacos.

“Queen Victoria Market is thrilled to be one of the 26 Australian icons for the Great Aussie Coin Hunt,” Mr Liacos said.

“The Market regularly welcomes schools with fun and educational guided tours, offering comprehensive activity sheets for teachers to use inside and outside the classroom.”

Queen Victoria Market opened in 1878, but part of the site was once a cemetery – spooky! George Milonas, also known as Queen Victoria Market’s George the Fishmonger, poses at the markets with a Y for yabby coin along with the real thing. Picture: Tony Gough

Four times the length of London’s famous Tower Bridge, Sydney Harbour Bridge opened in 1932. An ambitious feat of engineering at the time, the 1149-metre bridge remains the largest steel arch bridge in the world and is held together by six million Australian-made, hand-driven rivets.

Since BridgeClimb opened as a tourist attraction in 1998, more than four million people have climbed the 1439 steps to the top and back, including Prince Harry, Nicole Kidman and Will Smith.

Sydney Harbour Bridge was nicknamed ‘the Iron Lung’ because it kept so many people employed during the Great Depression. It should be called ‘the Iron Heart’ today, after more than 5000 marriage proposals have been hosted by BridgeClimb. 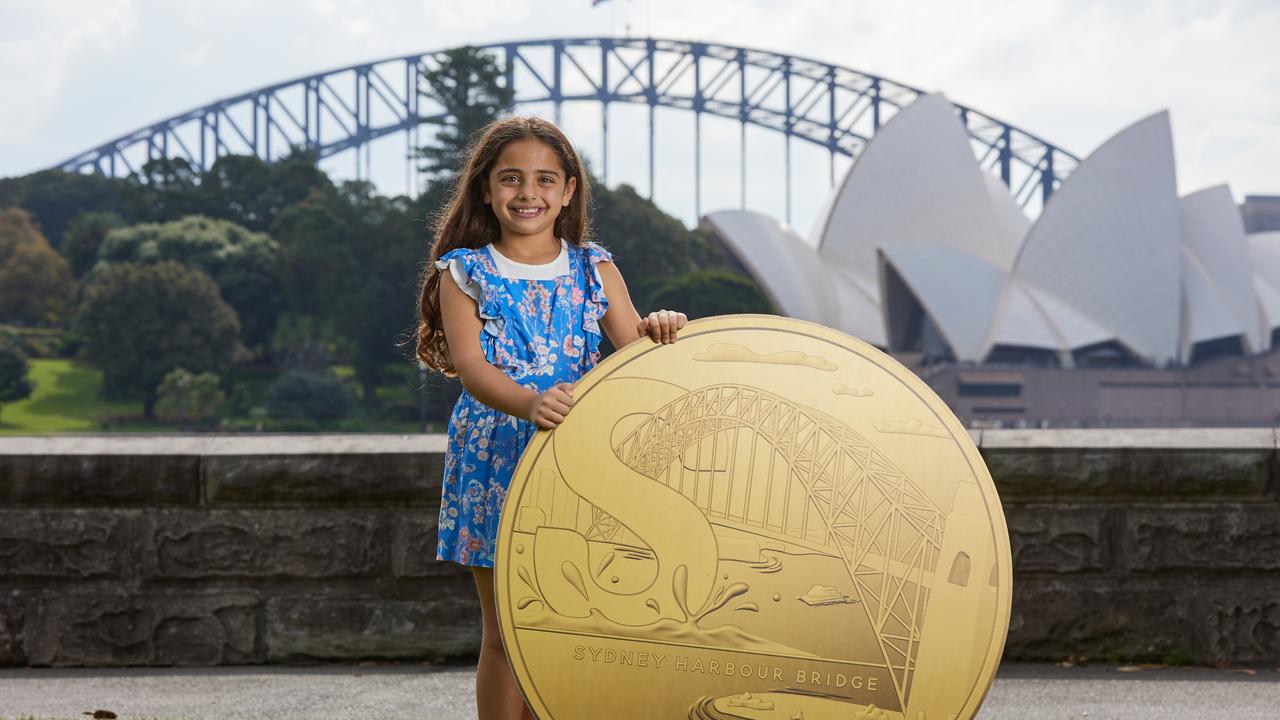 Lucy, 7, poses in front of the Sydney Harbour Bridge with a giant version of the new $1 coin, part of the Great Aussie Coin Hunt Collection. Picture: Australia Post/David Swift.

THE HUNT IS ON

Australian states and territories have always enjoyed a little healthy rivalry and the coins are no exception. While NSW is well-represented by its globally revered Sydney landmarks, only Queensland has the limited edition coin and Victoria is home to what is apparently the most sought-after coin.

“Based on our sales and customer feedback, we’re already seeing that this year’s Great Aussie Coin Hunt is just as popular, if not more so, than our first hunt in 2019,” Post Office Network general manager David McNamara said.

“The most sought after letter at the moment is Q for Queen Victoria Market, followed closely by V for Victa Lawnmower and G for Great Barrier Reef,” Mr McNamara said.

CLASSROOM ACTIVITIES
1. Visit Oz
Incorporate the locations featured on the Great Aussie Coin Hunt coins into an advertisement to entice visitors back to Australia when our international borders open. Your advertisement could be a poster, brochure, video, jingle, or anything else you can think of. Be creative!

2. Extension
Who wins in the Neighbours versus Home And Away rivalry in your class? Take a survey to find out. Keep a tally and present your findings in a graph of your choice.