The Vickers Vimy crew, from left, Keith Smith, Ross Smith, James Bennett and Walter Shiers, with their plane at the start, in England, in 1919, for the race from England to Australia. Picture: State Library of SA

Fifty years before the moon landing, two Adelaide brothers made history with their world-first flight from England to Australia in a cloth-covered, open cockpit*, two-engine biplane.

On November 12, 1919, Sir Ross and Sir Keith Smith set off to win the Great Air Race with the help of mechanics Wally Shiers and Jim Bennett, flying from London, UK, to Darwin in the Northern Territory in just under 28 days.

From the outset* they endured extreme conditions — from a snowstorm on takeoff that froze their sandwiches to birdstrikes and runways not long enough for their Vickers Vimy WWI Bomber.

The race captured the world’s imagination, and Sir Ross’s telegrams from each stop along the way were received with enormous interest.

When the Vimy touched down in Darwin on December 10, 1500 people turned out to greet their new heroes, and Sir Ross commented that he thought “the world had gone mad”. But 100 years on, the Vickers Vimy is stored in a staff carpark at Adelaide Airport and the names Ross and Keith Smith are unfamiliar to most Australians.

It’s a situation that Australian astronaut Andy Thomas would very much like to rectify*, after being inspired by the Smiths’ story as a boy growing up in Adelaide.

“Qantas owe their existence to that flight because Hudson Fysh, who formed Qantas, was tasked by the Australian Government to travel by motor vehicle across the northern part of Australia to map out potential landing sites for the Vimy after it had arrived in Darwin. He later used that information to form the Queensland And Northern Territory Aerial Service, so Qantas has a direct link to the Vimy flight.” “The country had just come out of four years of a ghastly war. It had a huge impact on the country and the old world had changed forever. A new world was emerging and there was a lot of uncertainty about what that new world was going to be,” he said.

“Then along come these four young Australians and they do something incredible by the standard of the day. The main mode of transport then was horse-drawn vehicles, and they fly an aeroplane no less from England to Australia, breaking the tyranny* of distance and showing what that new world order was likely to look like.”

“The flight fundamentally* demonstrated that distance was no longer a defence for Australia. We could now fly across the world, across continents and it really highlighted a need to develop air capability*, an air force,” Captain Weller said.

“We had good experience with aviation with the Australian Flying Corps in WWI but the flight highlighted that we needed to develop our own indigenous* air force.” The Vickers Vimy crew, from left, James Bennett, Ross Smith, Keith Smith and Walter Shiers, with their plane on December 10, 1919, after winning the race from England to Australia. Picture: State Library of South Australia

South Australia’s Chief Entrepreneur and member of the Sir Ross and Sir Keith Smith Fund advisory committee, Jim Whalley, said the flight was an important part of Australia’s history that should not be ignored.

“I suspect if they were Americans they’d be far more famous and the Vimy would be sitting in the middle of the Smithsonian Institution in Washington,” Mr Whalley said. “I don’t think we’re necessarily good at celebrating those heroes, and I think it’s so sad they’ve sort of fallen into a level of obscurity*.” 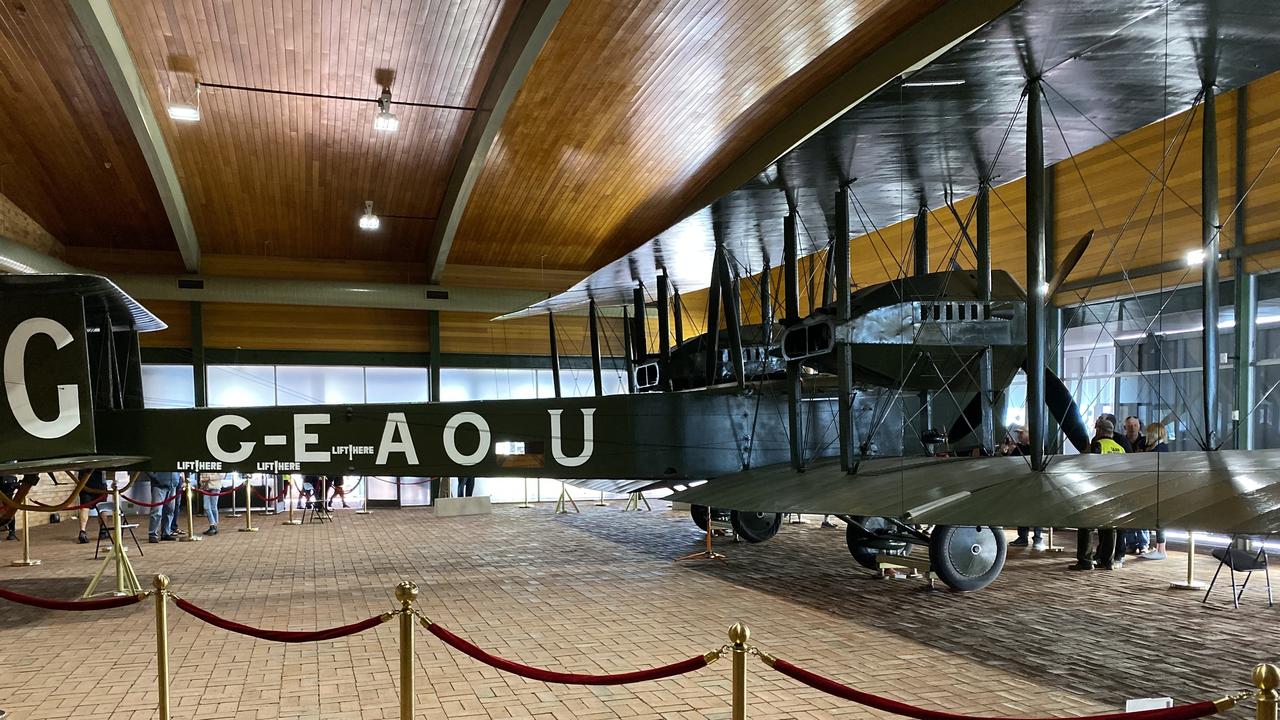 ASTRONAUT’S SPACE TRIBUTE
Former NASA astronaut Andy Thomas may not be the only fan of Sir Ross and Sir Keith Smith’s heroic England to Darwin flight in the aircraft Vimy but he is the only one to have taken their incredible story into space.

After learning of the epic flight as a boy growing up in Adelaide, the Australian astronaut was inspired to honour their legacy when he undertook his first space flight on the Space Shuttle Endeavour in May 1996.

“We’re allowed to carry artefacts into space, and I wanted to do something to bring the memory of Ross and Keith Smith’s flight back to life again because I thought there was a whole generation of Australians who were not aware of the flight or understood its significance, and I still think that’s true today,” Dr Thomas said.

“So I got in touch with the State Library of South Australia, and it turned out they had the cloth wings from Ross and Keith Smith — from their uniforms.”

The library sent the wings to Dr Thomas in the US and they were stowed on board the shuttle for what would be another epic journey.

“They travelled some 10 million miles,” he said.

“The England to Australia flight that took Ross and Keith Smith 27 days, took the wings about 20 minutes.” 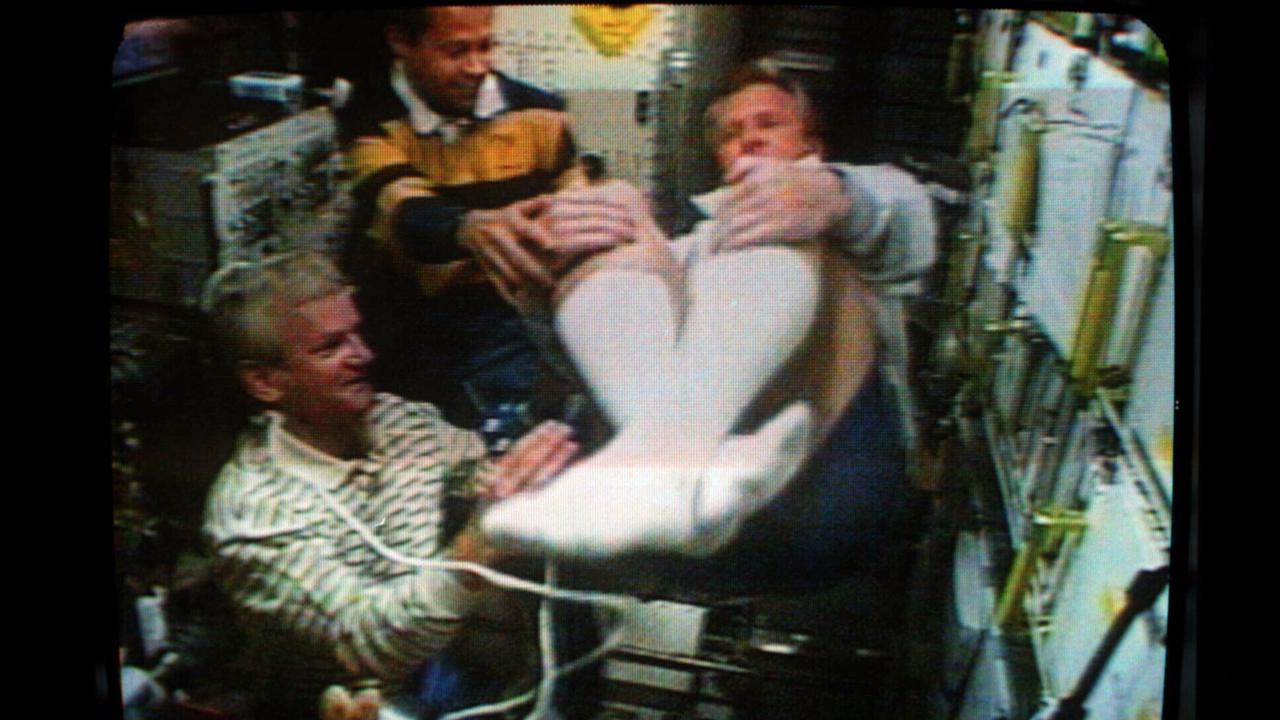 In honour of the flight’s centenary and its significance to aviation history the State Library in Adelaide is holding an exhibition of memorabilia*, including the cloth wings Dr Thomas took into space.

Adelaide Airport is building a new home for the Vimy more befitting* of the aircraft’s place in Australian aviation history.

Great Air Race to be recreated

100 years since Qantas was born on long drive

CLASSROOM ACTIVITIES
1. Honouring the Smith brothers
Andy Thomas, astronaut, believes that “Qantas owe their existence to that flight …” If that is true, work with a partner and give the current Qantas airline boss, Alan Joyce, some possible ideas or ways that the famous Australian airline could honour the Smith brothers. Your ideas should be creative, fun, attract a lot of interest and attention and help the Smith brother’s memory become more well-known in Australia’s history.

2. Extension
Jim Whalley from the Sir Ross and Sir Keith Smith Fund advisory committee states in the Kids News article that “I don’t think we’re necessarily good at celebrating those heroes, and I think it’s so sad they’ve sort of fallen into a level of obscurity.”

What does he mean by this statement? Can you think of a hero that is celebrated in Australia’s history and compare that to the Smith brothers. It might not even be a hero but someone well-known or remembered such as Ned Kelly.

HAVE YOUR SAY: Do you think Australians are good at celebrating heroes?
No one-word answers. Use full sentences to explain your thinking. No comments will be published until approved by editors.