Two robots and more than 100 people have been working for years on repainting the 95-year-old Sydney Harbour Bridge. Every year they strip back tens of thousands of square metres of lead-based paint and repaint four layers of fresh paint.

Mirko Cerovac is one of the painters. He has been on the job for 25 years. His sons, Goran, 44, and Joseph, 38, also work on the bridge, as a carpenter and supervisor.

The northern approach alone, rarely seen by most travellers across the bridge, is due to take three years. 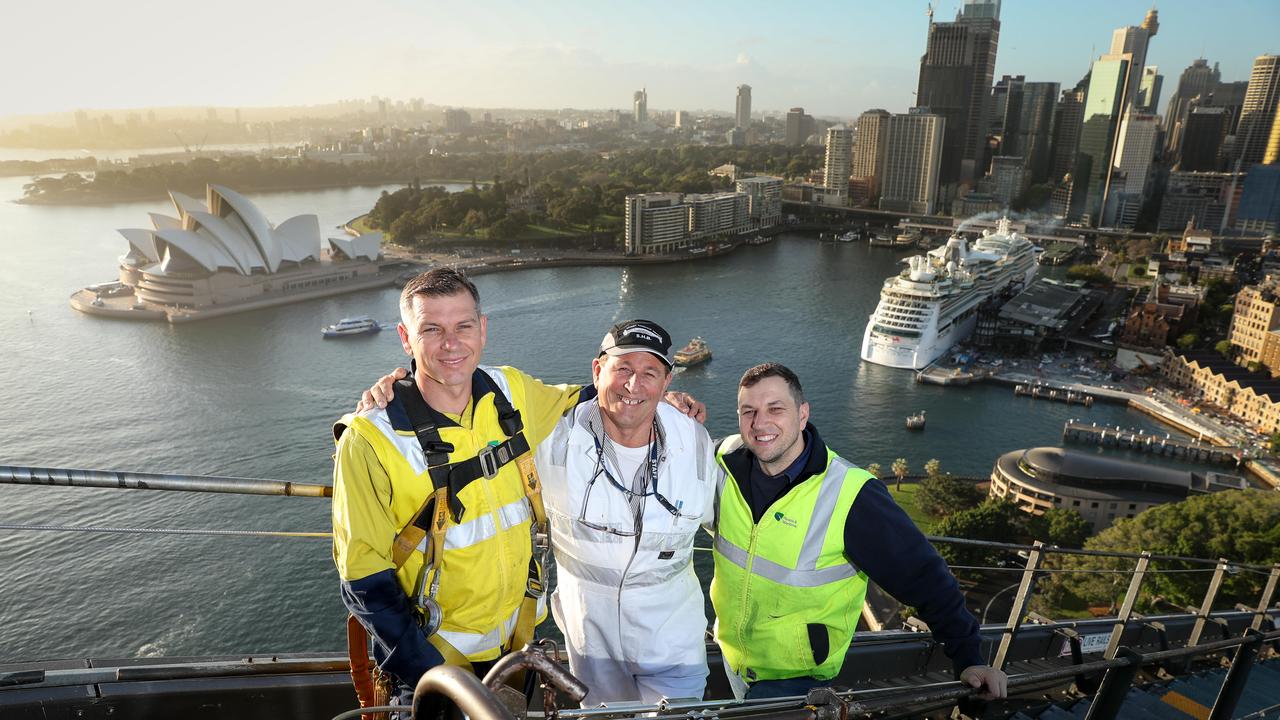 Mirko Cerovac (white overalls) with his sons Joseph and Goran (in the harness) have been maintaining the Sydney Harbour Bridge together for many years. Picture: Ryan Osland

To replace the old-fashioned lead paint, which is now known to be toxic*, carpenters build a containment* cabin to enclose an area about the size of a shipping container around one small part of the bridge. The cabin is then sealed up by plastic, after which workers enter in fully enclosed suits to sandblast* the lead paint away a few 20c piece-sized circles at a time.

“It’s normally about four weeks,” Joseph said. “Carpentry is two days. Containment plastic is another two days, then it’s three weeks sandblasting and painting.” When that shipping-container-sized part of the bridge is completed, they begin the process again on the next part of the bridge.

Painting is mostly sprayed on, though around the rivets* they still use a brush.

There’s a zinc-green undercoat, a red undercoat, a black undercoat, then, finally, Sydney Harbour Bridge Grey. It is a specially made colour, not available for anyone to buy or use.

There are several teams building, blasting and painting at any one time. “Our target is 16,000 square metres each year; within the next five years, we’re hoping to reach 20,000,” Joseph said. “We’re gradually going up.” Still, the team has barely begun on the main arch.

An advertisement in a newspaper got Mirko his job. “It didn’t say Harbour Bridge, that’s what drew us,” Goran said. “It just said bridge painter.”

“I used to do heights,” said Mirko, who left Slovenia aged 18 to emigrate* to Australia.

“I was factory-painting motorbikes and cars in Slovenia.”

He remembers driving over the bridge in a taxi when he first arrived in Australia. 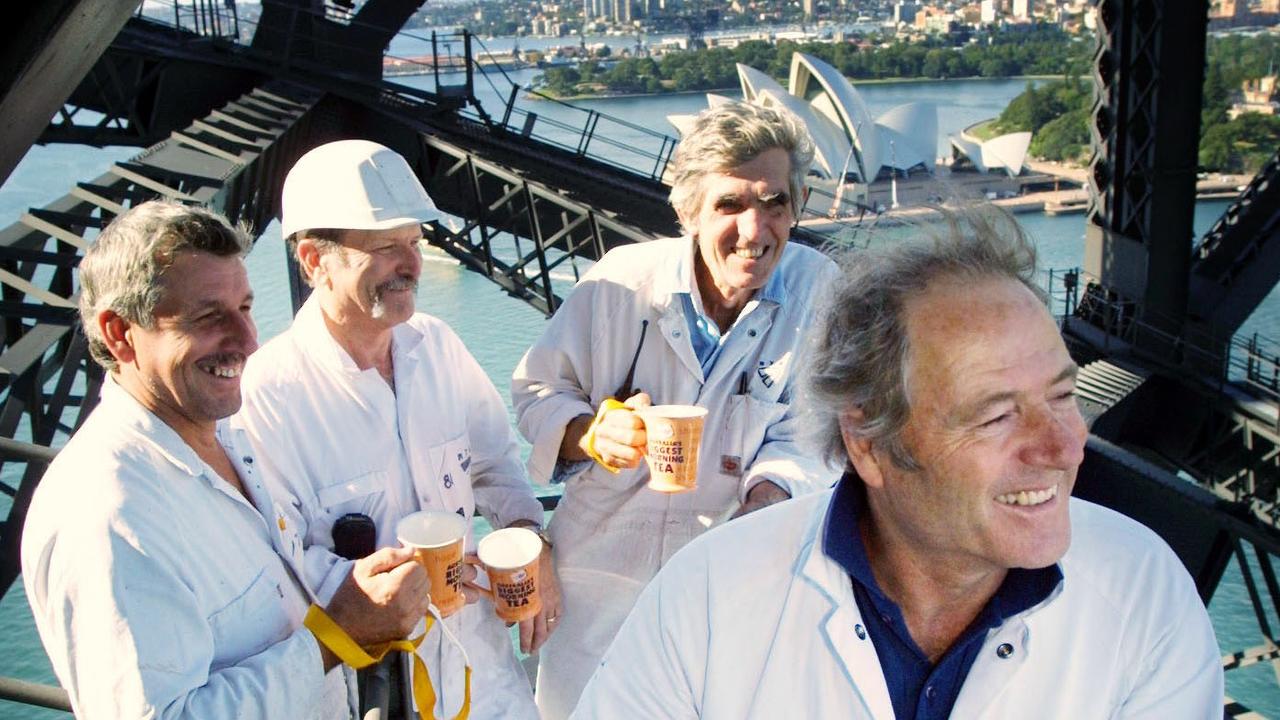 The Cerovacs are not the only family working on the Bridge. Jye Mansfield was one of 70 people to apply for three painting and ­boilermaker* positions. “The old man (his dad) said, ‘There’s a position going on the bridge. If you’re keen and smart, (and) lucky enough, you might get one’,” the 22-year-old said.

Jye’s father, Stephen, had been in smash repairs when he decided to move to peach farming. “I didn’t even eat peaches,” he said.

A friend got him an interview at the bridge and he was in. “A big change,” he said. “It was good.”

Peter Mann, the Bridge’s strategic infrastructure* manager, said those who work on the bridge “take enormous pride” in working on a piece of Australian history. Prince Harry, left, Prime Minister Scott Morrison, second from left, and Invictus Games representatives climb the Sydney Harbour Bridge on October 19. You can see the grey paint called Sydney Harbour Bridge Grey and some of the 6 million hand-driven steel rivets that hold the pieces of the Bridge together. Picture: AP

“We never want to replace the Sydney Harbour Bridge, and so we’re always working on strategies to ensure we take care of the Bridge for hundreds of years into the future,” he said.

Mr Mann said that even though the Bridge is 95 years old, it is still leading the world with the hi-tech equipment used to maintain it.

The NSW government’s roads organisation, called Roads and Maritime Services, or RMS, has two sandblasting ­robots that are used during ­painting and one climbing inspection robot, which inspects more than 7km of tunnels inside the arches.”

Melinda Pavey, NSW Minister for Roads, Maritime and Freight, said vehicles crossing the Bridge had increased more than 14-fold* since its opening in 1932 “so it’s essential the Bridge is maintained for the ­people it serves.

“Regular repainting is an ­essential and ongoing part of the Bridge’s maintenance.”

On October 17, Ms Pavey and 98-year-old Sydney woman Daphne Dunne opened two glass elevators so that people of all abilities can cross the Bridge’s footpath. Before the elevators, those who wanted to walk across had to climb 60 steps

Before the Bridge was built the only way across the harbour were by boat or a 20km drive that included five other bridges.

Its nickname is “the coathanger”.

The foundations for the four stone pillars are 12m deep each and are anchored by 36m-long tunnels dug into rock.

There are 6 million rivets in the Bridge, each of which was hammered into place by hand.

Work began in December 1926 and the then NSW Premier Jack Lang opened the completed Bridge on March 19, 1932. A photo from 2000, when Sydney hosted the Olympic Games. The Sydney Harbour Bridge and Sydney Opera House (in the left of the picture) are two of the most recognisable images of Australia. Picture: Getty Images

approach: road that leads to the Bridge

containment: hold something in

sandblast: sand is sprayed under pressure to strip off paint

rivets: like a nail, that holds two pieces of metal together

emigrate: leave your home country to live in another

1. How long has Mirko worked on the Bridge for?

2. Why do they take the lead paint off?

3. What colour is the final coat of paint?

Use what you have learnt from reading this news article about painting the Sydney Harbour Bridge to help you write a job advertisement looking for a new employee to join the team. The job advertisement should specify the types of skills, qualities, attitude and experience candidates would need to be successful in the role.

Extension: Make a list of other jobs that either work directly on maintaining or managing the Sydney Harbour Bridge, and of people who might use the bridge in the course of their work.

HAVE YOUR SAY: Have you ever seen, been across or climbed the Sydney Harbour Bridge? What about other big buildings, structures or mountains? Share your experience. What was it like? How did you feel? Use full sentences. No one-word answers.