Spooky goings-on at night in the museum 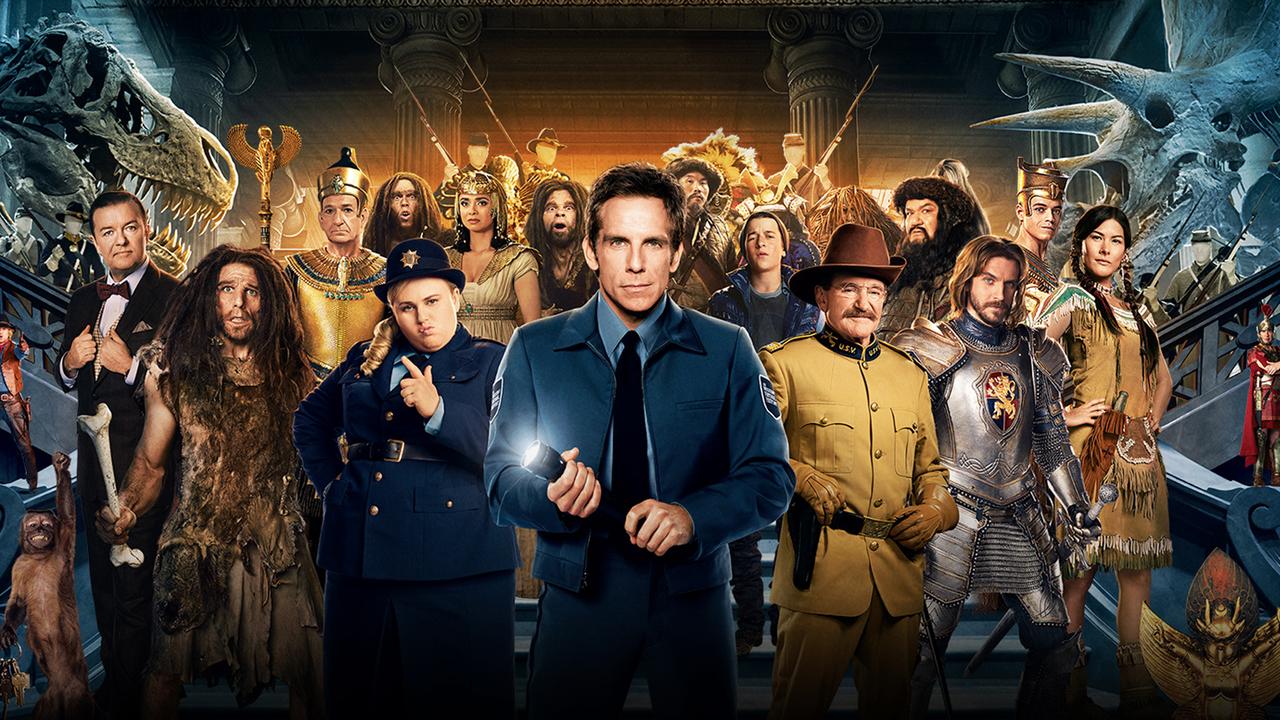 The stories people told about the British Museum are like real-life versions of what happens in the movie Night at the Museum: Secret of the Tomb.

British Museum guards have reported spooky goings-on including ghostly footsteps and mysterious crying among the exhibits.

Like a real-life version of the book and movies Night at the Museum (in which the ancient artefacts come alive at night), workers at the famous London, UK, museum have been seeing strange sights and hearing things go bump in the night.

There are more than eight million ancient artefacts at the British Museum, including the mummy case of an Egyptian high priestess, known as the “Unlucky Mummy” and blamed with causing catastrophes* such as the sinking of the Titanic. 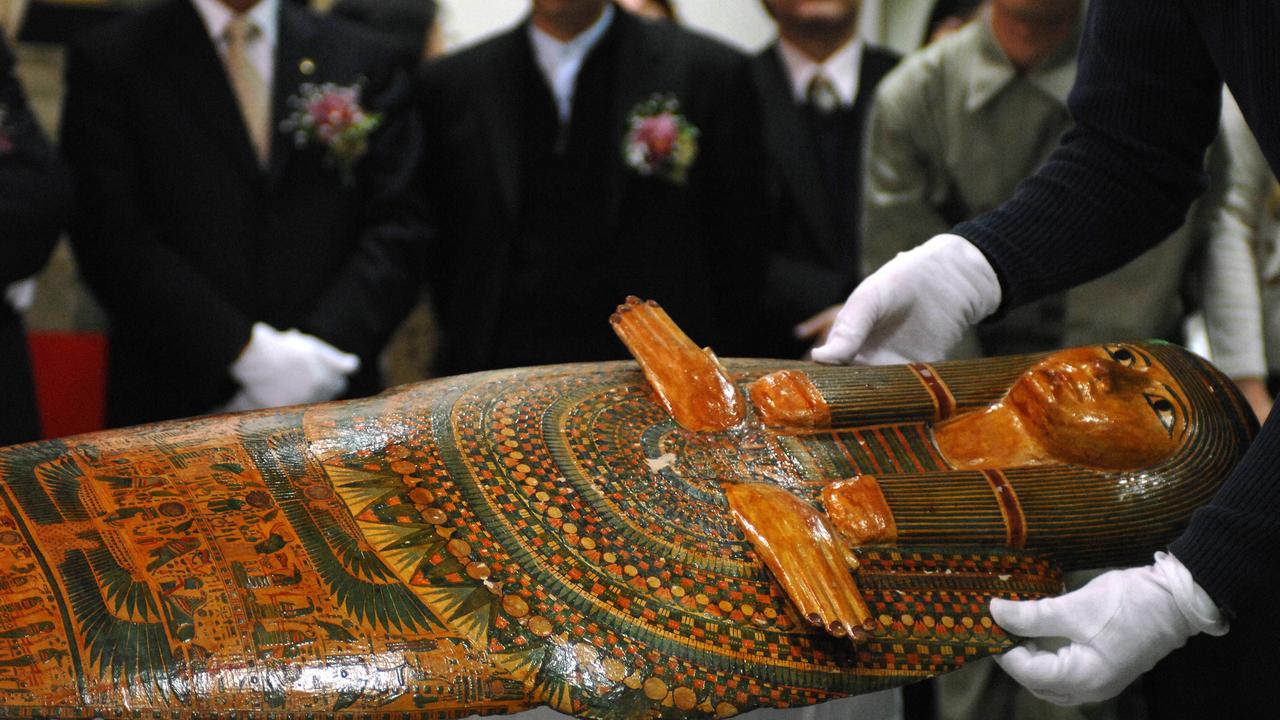 The “Unlucky Mummy”, from 945BC, displayed by the British Museum when it was visiting Taiwan’s National Palace Museum in Taipei in 2007. Picture: AFP

Museum guards have reported doors swinging open, fire alarms sounding at midnight and chilling* music floating through the galleries of the 18th-Century building.

Others say glowing white orbs* have been spotted hovering above a staircase in the Great Court on security film.

Tourist have even reported seeing the ghost of a female dwarf in the reflection of a glass case holding a 16th-Century mechanical galleon*.

The spooky tales have been collected by artist Noah Angell, who spent four years talking to 50 employees about their experiences. People have reported seeing glowing shapes floating up the staircase in the Great Court at the British Museum, London, UK. Picture: iStock

CHILLY MUMMIES
Guard Phil Heary — who worked at the museum for 29 years — said he felt the temperature drop dramatically* while in the Ancient Egypt gallery where 19 mummies were on display.

“It was like walking into a freezer,” he said.

“My stomach turned over. The feel of the gallery was – you wanted to get out. I’m a great believer that, wherever you’re buried, you should stay there. A lot of the mummies there should be back in their graves.”

The First Egyptian Room is also home to the mummy case of a high priestess of the Temple of Amen-Ra known as the “Unlucky Mummy”.

It was donated to the British Museum in July 1889 and has been blamed with causing death, injury and even catastrophes such as the sinking of the Titanic in 1912.

There have also been strange stories about the Elgin Marbles, which were removed from the Parthenon in Greece in the 1800s.

According to legend among workers, the sculptures were heard weeping inside the crate as they were moved to the UK. Ancient Greek sculptures known as the Parthenon Sculptures or the Elgin Marbles in the British Museum.

GHOST STORIES
Other guards said they have bolted the doors to the Sutton Hoo gallery of European history, just to find they were wide open moments later.

One worker said they heard fire alarms ringing out through the museum after pointing at the figure of a two-headed dog made in the 19th Century.

And in the dead of night, the overnight security team heard an alarm sound from a bathroom above the staircase in the Great Court.

A security camera operator then told them there were large balls of white light floating above the steps, but the guards couldn’t see anything.

Spooked employees at the time believed the orbs could be connected to a white, wrought-iron gate from a concentration camp* in Germany which formed part of an exhibition in 2014-15. There are more than eight million artefacts from around the world at the British Museum, the largest museum of antiquities in the world. Picture: iStock

COLLECTING STORIES
Mr Angell first began investigating the goings-on at the museum in 2016 after hearing the stories at a pub in London.

He said: “I thought that there would be a half dozen or so stories which everyone knows, and they circulate around the museum, and little variations and mutations* are created.”

But he found there were many more strange tales than he expected.

Jim Peters, collections manager at the Britain, Europe and Prehistory department, said he “agrees to a certain extent” there could be “restless objects” inside the museum.

The British Museum was established in 1753.

It is currently closed due to COVID-19 restrictions but there are many ways to experience this and other museums online, including on Google Street View.

Take a virtual tour around the world

CLASSROOM ACTIVITIES
1. Write a conversation
Pretend you are a security guard who witnessed one of the events mentioned in the article.

Write a conversation between you and a co-worker or family member, trying to explain what you saw or heard.

In the conversation, explain where you were, what you saw, what you heard and how it made you feel. Use adjectives to help create a picture of the experience you are describing.

2. Extension
Write your own short story version of Night at the Museum, even if you haven’t read the book or seen any of the movies (you don’t need to have this prior knowledge, just imagine what might happen when things come alive at night in a museum). Your story can be set at the British Museum or another museum or gallery you are familiar with. Be inspired by one of these unexplained events or come up with your own ‘spooky’ experience for your story. Use descriptive words to create a ‘spooky’ feel to your story.

3. Extension
Choose one of the artefacts mentioned in the article and write down all the things you know about it – from your prior knowledge and from the article.

Can you find out any more information about this artefact? Where is it from (which country)? Which historical period is it from? Why is it significant? What can we learn from it? Is there any controversy surrounding it?

Use your prior knowledge, the article and any further research to write a paragraph explaining what the artefact is, where it is from and what its significance is.

HAVE YOUR SAY: What would you like to see at night in a museum?
No one-word answers. Use full sentences to explain your thinking. No comments will be published until approved by editors.