Valeria Amoretti works with a brush on the skeleton of a 35-year-old man found at Pompeii. Picture: AP

Archaeologists* have found the 2000-year-old skeleton of a man who was killed by an enormous rock at Pompeii, southern Italy, as he tried to flee the erupting volcano Mount Vesuvius.

They believe the 35-year-old man survived the first big explosion from Mount Vesuvius but was killed by a blast of hot ash lava and gas and was struck by a massive rock thrown down from the mountain. The archaeologists can see that the man had suffered from an infection in his tibia, or shin bone, which would have made running difficult or impossible. The legs of a skeleton of a 35-year-old man visible beneath a big stone at the Pompeii archeological site. Picture: AP

The archaeological site’s director, Massimo Osanna, called it “an exceptional* find” that contributes to a better “picture of the history and civilisation* of the age”.

Photos of the skeleton show it partly beneath a 300kg block of stone believed to be the upright part of a doorway, which may have fallen on him after he died.

Mount Vesuvius erupted in 79AD, killing thousands of people and covering the ancient* Roman town of Pompeii and surrounds in 4-6m of ash and volcanic rock. More than 1500 bodies have been found so far, but no one knows how many people died.

Pompeii was forgotten for 1500 years after the eruption. It was rediscovered in 1599 and again in 1748. The city is so well preserved because of the lack of air and moisture under the volcanic rock, allowing an amazing insight* into life in an ancient Roman city.

The discovery of the man’s skeleton follows several important finds in past weeks.

The body was found close to an alleyway of balconies unearthed* earlier this month that experts plan to restore* for public tours. Pompeii with Mount Vesuvius in the background. Picture: supplied

Archaeologists also dug up an ancient horse outside the Pompeii city walls, which they were able to cast to recreate* its body by putting liquid plaster into the gaps left behind when it decomposed* after it was covered in volcanic ash.

The same technique has been used to recreate the final poses of many of Pompeii’s victims.

IF YOU LIKED THIS STORY, READ THIS: Dinosaur footprints found on Scottish isle 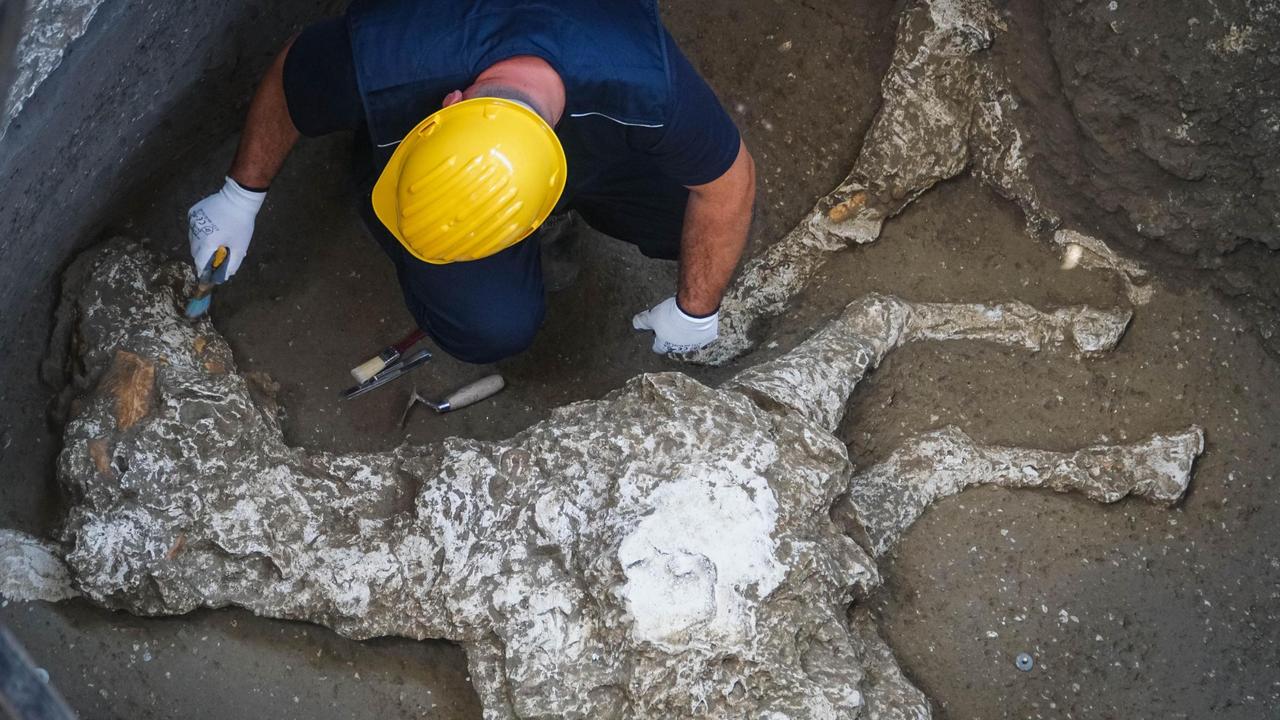 The remains of a horse found in a stable of a Pompeii villa. Picture: AP

ANOTHER STORY ABOUT ANCIENT PEOPLE: Solving the Stonehenge mystery civilisation: the society and culture of a group

restore: bring back to how it was

1. How do archaeologists believe the man died?

2. Why might he not have been able to run to safety?

3. How many people died?

4. Why is the city of Pompeii so well preserved?

5. How long has it been a tourist attraction? How many tourists visit each year?

Archaeologists have been studying the city of Pompeii for many years.

Read the article carefully to find all the facts mentioned that archaeologists have learned about Pompeii and what life in a Roman city was like in 79AD.

Make a list of these facts and use them to write a paragraph titled Pompeii in 79AD.

Can learning about the past help us today? Do you think it is important to study the past? Why/why not? Write your opinion in a few sentences.

Extension: In recent weeks there has been a volcano erupting in Hawaii.

Both the eruption of Mt Vesuvius in 79AD and the eruptions in Hawaii now are significant volcanic events, yet the experience for all involved would be very different. Draw up a chart to list some of the SIMILARITIES and DIFFERENCES between the experience of those in Pompeii in 79AD and those currently in Hawaii. Think about how life, technology and knowledge were different in 79AD compared to now. What would each group be seeing, hearing and feeling?

HAVE YOUR SAY: Pompeii, Stonehenge and the Great Barrier Reef are all World Heritage Sites.

In at least one sentence, tell us why you think it is important to study and preserve these places. No one-word answers. Use full sentences.