The top-secret and dangerous true story behind the Titanic discovery has finally been told.

The man who found the world’s most famous shipwreck was really on a war mission* for the military*. His actual job was to check on two very toxic* nuclear* submarines. The fact he found the Titanic became his cover story and the US Navy has kept his real mission secret, until now.

This amazing Titanic story, plus many never-before-seen artefacts*, are the focus of a new exhibition called Titanic: The Untold Story.

The Titanic — at the time the world’s biggest passenger ship — left Southampton, England, on April 10, 1912 bound for New York with 2200 people on-board. It hit an iceberg and sank in the North Atlantic Ocean on April 15.

Also on display at the exhibition at the National Geographic Museum in Washington DC, US, are the only known set of boarding tickets and the sheet music that the band was playing as the ship sank. All of the musicians died because they continued to play as the ship went down to help calm down the guests.

US Navy commander and oceanographer* Robert Ballard found the shipwreck on the floor of the North Atlantic Ocean in 1985. He had to convince his boss to let him also look for the Titanic and only had 12 days to do so. When he found it, he had to keep the real reason for his mission a secret for many years. Robert Ballard, who discovered the Titanic, has continued to use ever-advancing underwater technology to explore the sea bed and find shipwrecks.

Commander Ballard invented a new technology, a deep-sea camera. This was 33 years ago, before the robotic deep-sea explorers used today were invented.

He was asked by the US Navy to explore the wrecks of two nuclear-powered submarines, the USS Thresher and the USS Scorpion, which were used in the Cold War* between the US and Russia after World War II until 1991. The navy wanted to know why the submarines had sunk and whether they were dangerous because of their nuclear fuel.

“I suggested that because the Titanic was between the Thresher and Scorpion, maybe tell the world I am looking for the Titanic,” Commander Ballard said.

Deputy Chief of Naval Operations Ronald Thunman agreed, saying “if you do your mission, I don’t care what you do with the rest of your time.” The Titanic before it sank. Note the four smoke stacks. One was for show to make the ship look more impressive.

Commander Ballard studied every detail of the Titanic and decided to seek not the ship itself, but the debris* field, believing the ship had left a trail of debris as it sank. He said it was like photographing a deer in the wild in snow: follow the footprints rather than look for the deer.

“I knew it wasn’t where everyone said it was,” he said. Raising of the Titanic as shown in the TV program “Ghosts of the Black Sea”.

At 2am on September 1, 1985, his deepwater camera began delivering images of the ship’s boiler* that drove the steam engines.

“We were at the very spot the Titanic sank.” 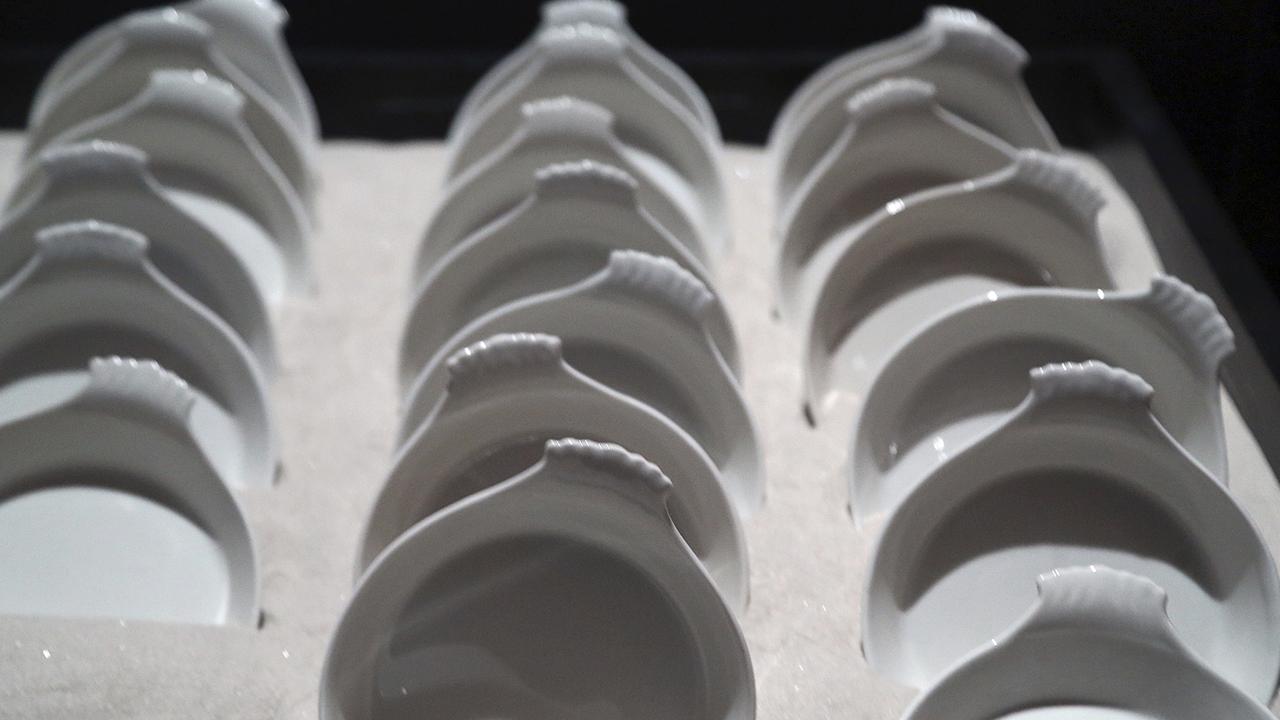 Dishes from the Titanic exactly as they were found on the ocean floor. Picture: AP

military: armed forces, such as army, navy or air force

nuclear: a type of fuel that is very dangerous

1. What was Robert Ballard’s actual mission?

2. What did Robert Ballard invent that made finding the shipwreck possible?

4. Why did it have four smoke stacks?

5. What was the ship smeared in before it left England?

Create a comic strip about the events leading up to, and how the Titanic was finally discovered at the bottom of the ocean. Use some of the historical information presented in the Kids News article. You can draw up your comic strip squares (limit it to 8-12 to tell the story) on paper, or use computer software if available. Remember comic strips need to tell the story through mainly pictures and speech bubbles, with not too much text in each box. Share your comic strip among your class mates.

Extension: Create some newspaper headlines for the day the Titanic was discovered. They should be catchy and convey the excitement of the historical event.

QUESTION: It is more than 100 years since Titanic sank. Why do you think we still find it so fascinating?

Explain your answer with full sentences. We don’t publish comments that are only emojis.