A rusty piece of 1970s steel water tank and the Australian man who bought it have set a new world record.

They were made by Shepparton, Victoria, company J Furphy & Sons from 1864 and farms used horses to pull them to carry water to sheep and cattle and fight fires. They were important equipment to cart drinking water for World War I soldiers in Europe and the Middle East. Adam Furphy, managing director of J. Furphy & Sons and the fifth generation of Furphys to lead the company, said the cart drivers brought news and gossip to the soldiers as they moved from camp to camp.

“Not all of their news was reliable*, leading the word ‘furphy’ to become a synonym* for suspect* information or rumour,” Mr Furphy said.

Although the Furphy company still makes stainless-steel water tanks, the old tanks are fought over by collectors each time one is offered for sale.

Many of the old tanks feature poems and sayings on the steel ends.

Mr Ford bought the tank end at a sale of a large collection owned by Glenrowan man John “Clancy” Paull. Mr Paull had been collecting vintage Australian-made water carts and parts since 1988 but his collection became too big, so he decided to sell most of it. 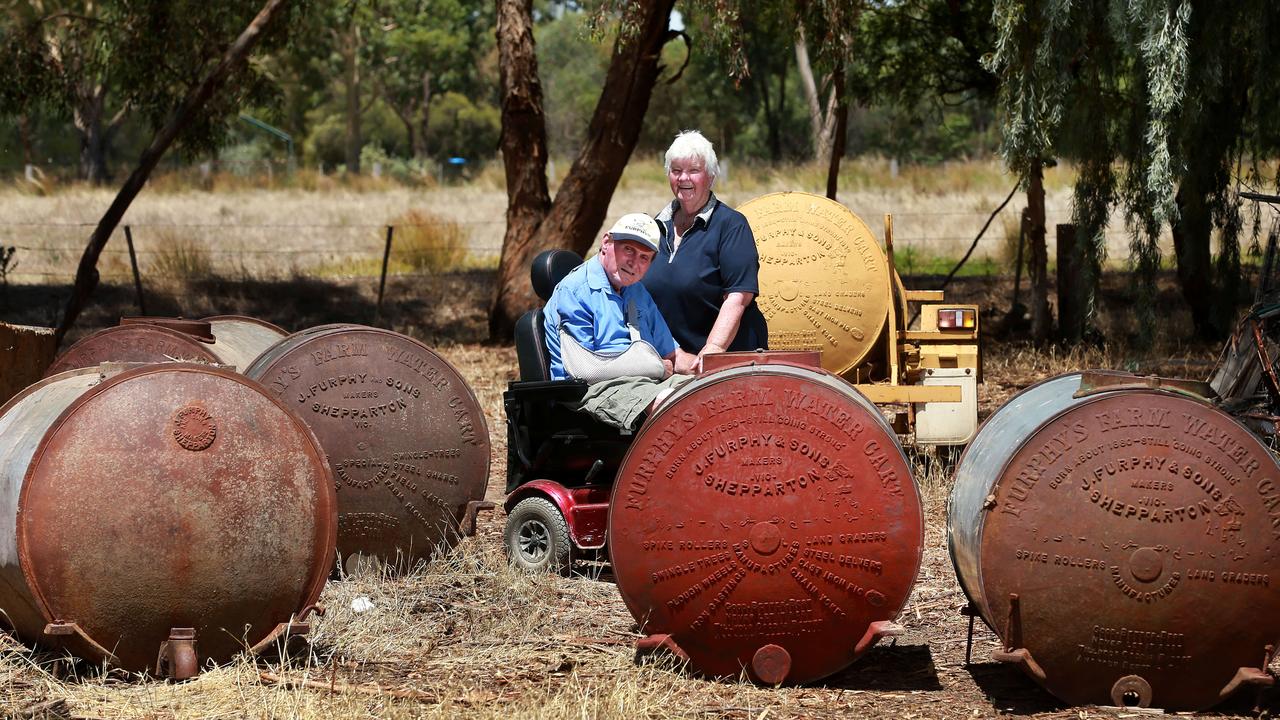 Fred and Shirley Bridgewater collected Furphy tanks until they sold them in 2017. Picture: Andy Rogers

“This was one of the largest Furphy and collectable sales we have conducted in a long time and one that has set record benchmark* prices.”

Mr Paull said he had no idea when he started collecting that one day his collection would be so valuable.

“There’s a little bit of regret but I know the collection is going to people who will appreciate* the pieces and enjoy them as I have,” he said. Some of the shorthand writing on the end of a Furphy water tank. Picture: News Corp Australia

A POEM, A SLOGAN* AND A FURPHY

Clydesdale horses hang up their reigns

synonym: means the same as

suspect: doubtful or not believable

auctioneer: salesman who runs the auction

benchmark: standard to measure other things by

1. How much did Brett Ford pay for the tank end?

3. Why did Mr Paull sell the tank end?

4. It’s not Arabic lettering on some of the tank ends. What language is it?

5. Who was the Prime Minister during World War I?

The Kids News article explains one of the phrases of Aussie slang. The Furphy tanks also had some other interesting phrases of the time written on them and there are many more in our slang language, some still in use, some not known so well any more.

Write the meaning next to the phrases below. If you don’t know some, ask your classmates and share your ideas.

Good, Better, Best, Never let it Rest, Till Your Good is Better, And Your Better Best

Water is the Gift of God, but Beer and Whisky are concoctions of the Devil, come and have a drink of Water

Have a Captain Cook

Put a sock in it

Hit the frog and toad

Extension: Write a list of some other appropriate Aussie slang words or phrases that you know of.

QUESTION: What would you write on the end of a water tank if you were designing one for World War I soldiers? Why? full sentences to explain your answer.