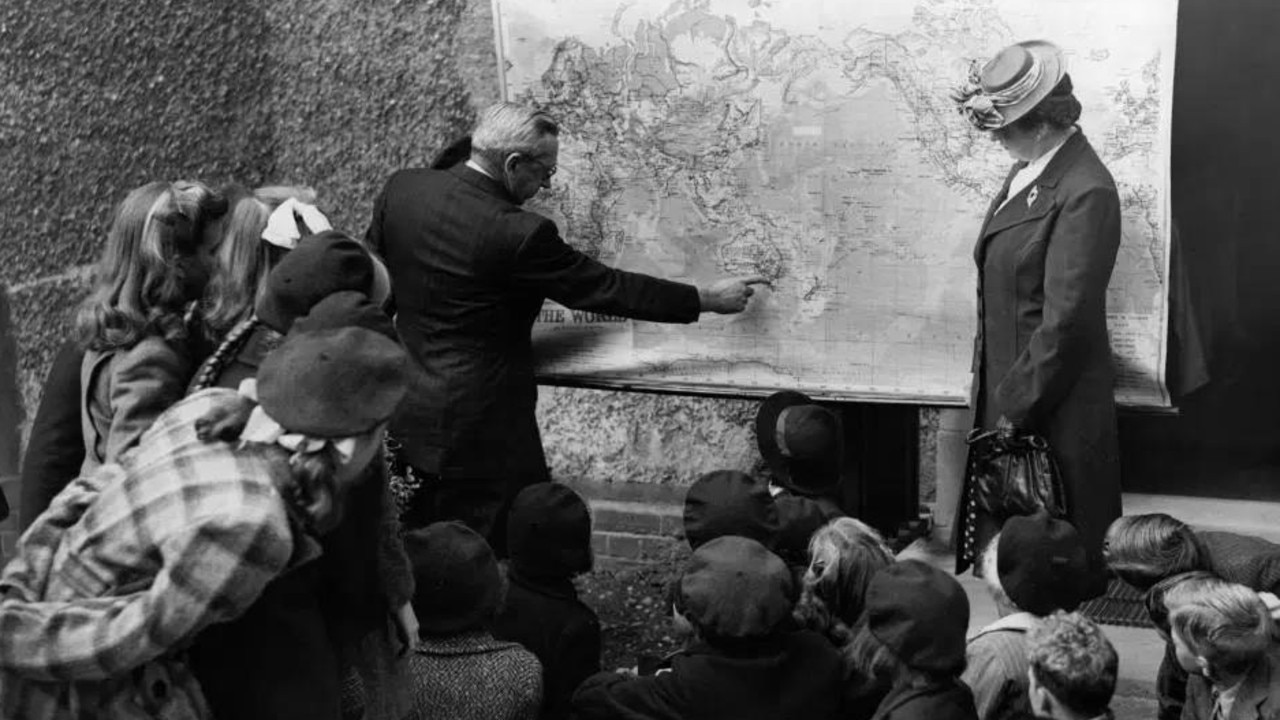 British children looking at a map of Australia where the boys will go to a farming school and the girls to a domestic service training home.

More than 1.5 million people came to Australia from the UK after World War II as “Ten Pound Poms*” in what is one of history’s largest planned immigrations.

This collection of black-and-white photos provides a fascinating snapshot* of this period of history. A girl waiting with all her belongings for her train to Tilbury, UK, where she, along with 1100 others, would set sail to Australia.

Australia’s government, business owners and farmers wanted to increase the population, mostly so there were enough workers for all the jobs that needed doing. A group of builders before boarding their train at London’s St Pancras Station at the beginning of their big trip to Australia.

The people who came wanted to escape post-war food rationing* and housing shortages in the UK. Cities in the UK were heavily bombed during the war, so many houses were destroyed. UK farms didn’t produce enough food during and after the war as people were busy fighting or were killed, injured or making things needed for the war. 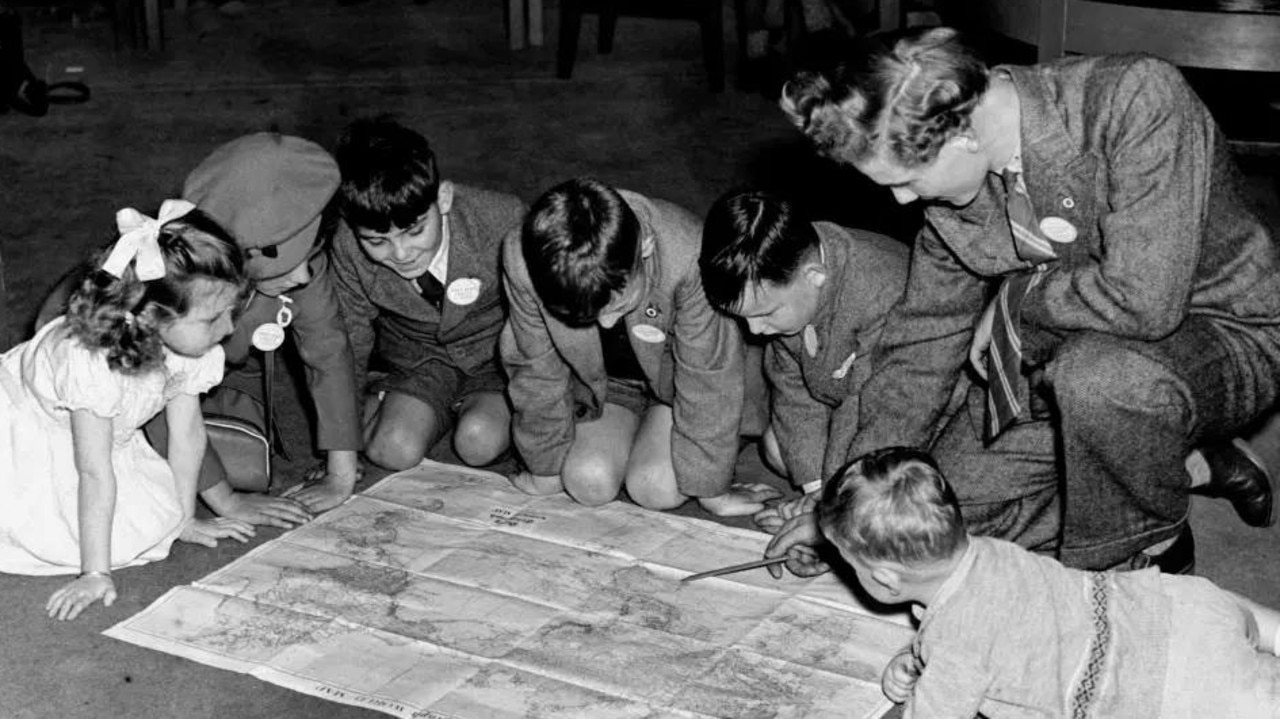 A group of children studying a map of Australia before their journey.

The usual cost to come to Australia was 120 pounds but the Australian government subsidised* this so that it only cost 10 pounds. Immigrants had to agree to stay for two years or pay back the money. Children board a train at St Pancras Station, London, at the start of their journey to Australia.

Kathleen Upton, of Hastings, England, left for a better life in 1954. She couldn’t believe the quality of food in Australia.

Speaking in 2008, she told the BBC: “We were on rations in London and there was so much and such tropical fruits.

“I think they resented us very, very much.

“This shipload of people coming out from Europe would be taking their jobs.” John Kemp and his family preparing to make the journey from Kent, England, to Queensland.

Not everyone who came found jobs or somewhere to live. Those without savings had to live in huts or tents in army barracks*.

More than 250,000 migrants who felt homesick or misled* about the opportunities in Australia returned home after their two years. A family that moved from Glasgow, Scotland, to the town of Moe, Victoria.

However, almost half of the people who returned to the UK then ended up going back to Australia. They got the nickname “Boomerang Poms”.

The campaign to get people from the UK to come to Australia was part of an immigration plan that was called the White Australia policy. It discriminated* against those who were not white. 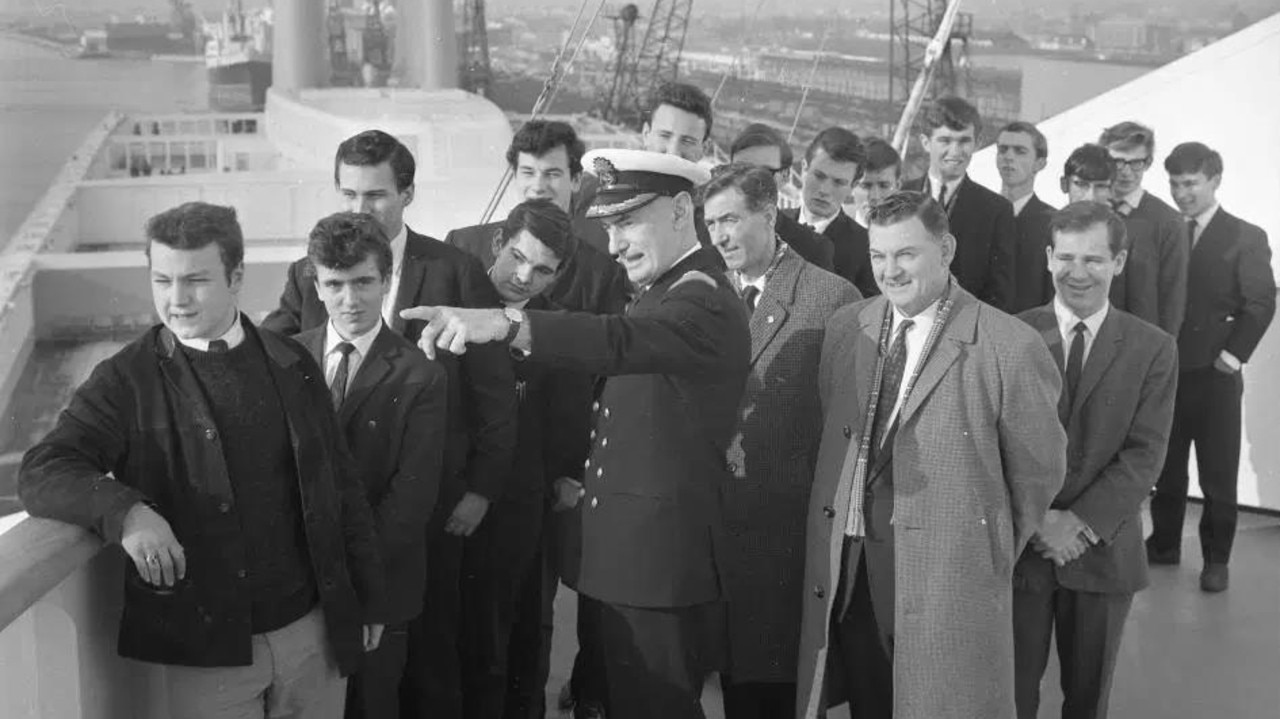 A group of boys aged 16 to 19 at Southampton, England, ready to start their journey by ship.

In 1947, the Australian government set a target that 90 per cent of immigrants should come from the UK. This was difficult to achieve. Between 1953 and 1956 immigrants from southern Europe outnumbered those from the UK.

A new campaign in the 1960s called “Bring out a Briton” offered financial* assistance to UK immigrants. The Braine family boarding their plane before the start of their long flight. Most immigrants came by ship but in later years, some travelled by plane.

Despite these campaigns, the country relied on the more than 100,000 non-UK immigrants from 30 countries who worked on big projects such as the Snowy Mountains Scheme*.

This story first appeared in The Sun and was reproduced with permission. Dr Brenda Ridley reading to a group of immigrant children. Dr Riley and her husband travelled with 12 boys aged 6-13 to Fremantle, WA, to attend the Fairbridge Farm School at Moolong, NSW.

Poms: a slang name for people from the UK

snapshot: showing how something was at a particular time

rationing: allow each person to only have a certain amount

subsidised: help someone pay for something

impression: an idea, feeling or opinion about someone or something

barracks: a large building or settlement for soldiers

misled: caused someone to get the wrong idea

financial: to do with money

1. How many “Ten Pound Poms” came to Australia? How many came in the first year?

2. What was the usual cost to come to Australia? How much did it cost the immigrants?

3. About how many people earned the nickname “Boomerang Poms”?

4. What was the 1947 target set by the Australian government?

5. What was the White Australia policy and when did it officially end?

1. New Life Down Under

2. Extension: Choose one of the black and white photos featured in the Kids News story and write a list of feelings and emotions that the people in the picture may have been feeling.