Archaeologists are uncovering a mysterious ring of mammoth bones built by our ancient ancestors.

Nicknamed ‘Bonehenge*’ the structure has been dated to around 20,000 years ago – during the last Ice Age.

The ring is located on the Russian Plain*, and was likely built by Palaeolithic* hunter-gatherers.

And it was created at a time where temperatures in the winter were often as low as -20C.

There are more than 70 strange bone structures in the area, but this site – named Kostenki 11 – is believed to be the oldest.

“These finds shed new light on the purpose of these mysterious sites,” said Dr Alexander Pryor, of the University of Exeter, UK, who led the study of the structures, first discovered in 2014.

“Archaeology is showing us more about how our ancestors survived in this desperately cold and hostile* environment at the climax* of the last ice age.

“Most other places at similar latitudes* in Europe had been abandoned by this time, but these groups had managed to adapt to find food, shelter and water.”

Archaeological dating puts the bone circle at around 20,000 years old, when the last Ice Age was reaching its coldest point.

Most of the bones are from mammoths, including 51 lower jaws and 64 individual mammoth skulls.

They were used to construct walls for a structure measuring about 9m by 9m.

And some of the bones were also scattered across the circle’s interior. 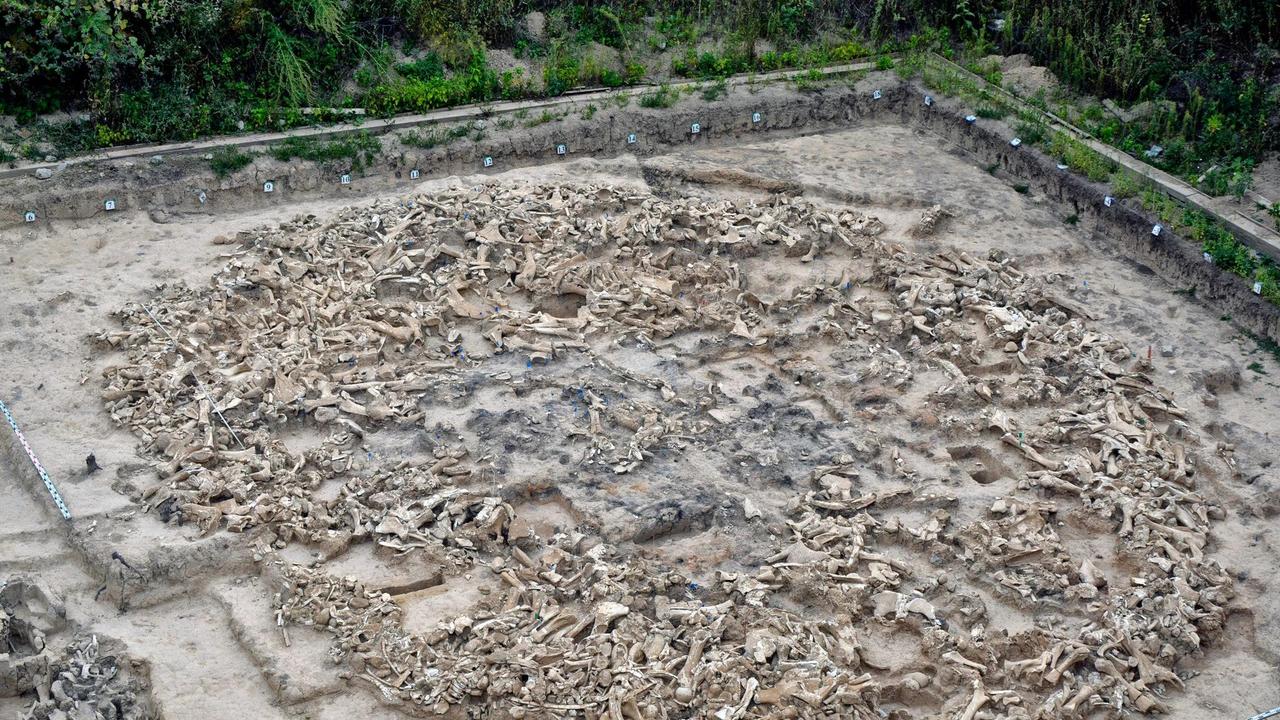 Other animal bones found at the site included reindeer, horse, bear, wolf, red fox and arctic fox – but these were small in number compared to mammoth remains.

Archaeologists also uncovered the remains of charred wood and soft plants within the structure.

This suggests that people were burning wood as well as bones for fuels.

And communities who lived in the area had learned where to forage for edible plants in the frosty climate.

The plants may have been used for poisons, medicines, string or fabric.

More than 50 small charred seeds were also found, which are the remains of plants growing locally or potentially remains from cooking and eating.

Archaeologists don’t know exactly who created the bone structure, or why.

“What might have brought ancient hunter gatherers to this site?

“One possibility is that the mammoths and humans could have come to the area en masse* because it had a natural spring that would have provided unfrozen liquid water throughout the winter – rare in this period of extreme cold.”

Summers were short and cool and winters were long and cold, according to climate reconstructions.

Most communities are believed to have left the region, due to a lack of prey and plant resources.

This likely led to the abandonment of the bone circles too. An artist’s impression of woolly mammoths, an extinct relative of Asian elephants. They were about the size of modern African elephants. Picture: Getty

WOOLLY MAMMOTHS
The species first appeared 400,000 years ago in East Asia when it evolved to be distinct from the steppe mammoth.

Its closest living relative today is the Asian elephant.

Woolly mammoths are one of the best-studied prehistoric animal, due to the discovery of frozen carcasses in Siberia and Alaska.

We also have evidence of them in the form of skeletons, teeth, droppings and cave paintings.

A woolly mammoth was similarly sized to a modern African elephant, with males typically around 3.3m tall, and weighing up to 6 tonnes. Females were slightly smaller. A newborn calf weighed around 90kg.

Woolly mammoths were well-adapted to the frosty temperatures of the last Ice Age, thanks to their fur coats.

They largely disappeared from the European mainland around 10,000 years ago, thanks to a shrinking habitat and hunting by humans.

Isolated populations survived on Arctic islands until as recently as 4000 years ago.

This article was originally published in The Sun and was republished with permission.

CLASSROOM ACTIVITIES
1. Standing in Bonehenge
Let’s imagine you are standing in the centre of “Bonehenge” 20,000 years ago. Write your best description of this setting, incorporating each of the 5 senses. You should elaborate further on the details that are known from the news story.

Find one sentence each for food, shelter and water from the text that explains a little more.

VCOP ACTIVITY
Big Draw
Create a cave painting story about the ancient site. Cave drawing has occurred at all different times, so it can be from the time of the woolly mammoths or from when communities lived in the area.

Share your drawing with a partner and describe the story behind the drawing. What is it telling us?

HAVE YOUR SAY: What do you think the circle of mammoth bones was for?
No one-word answers. Use full sentences to explain your thinking. No comments will be published until approved by editors.