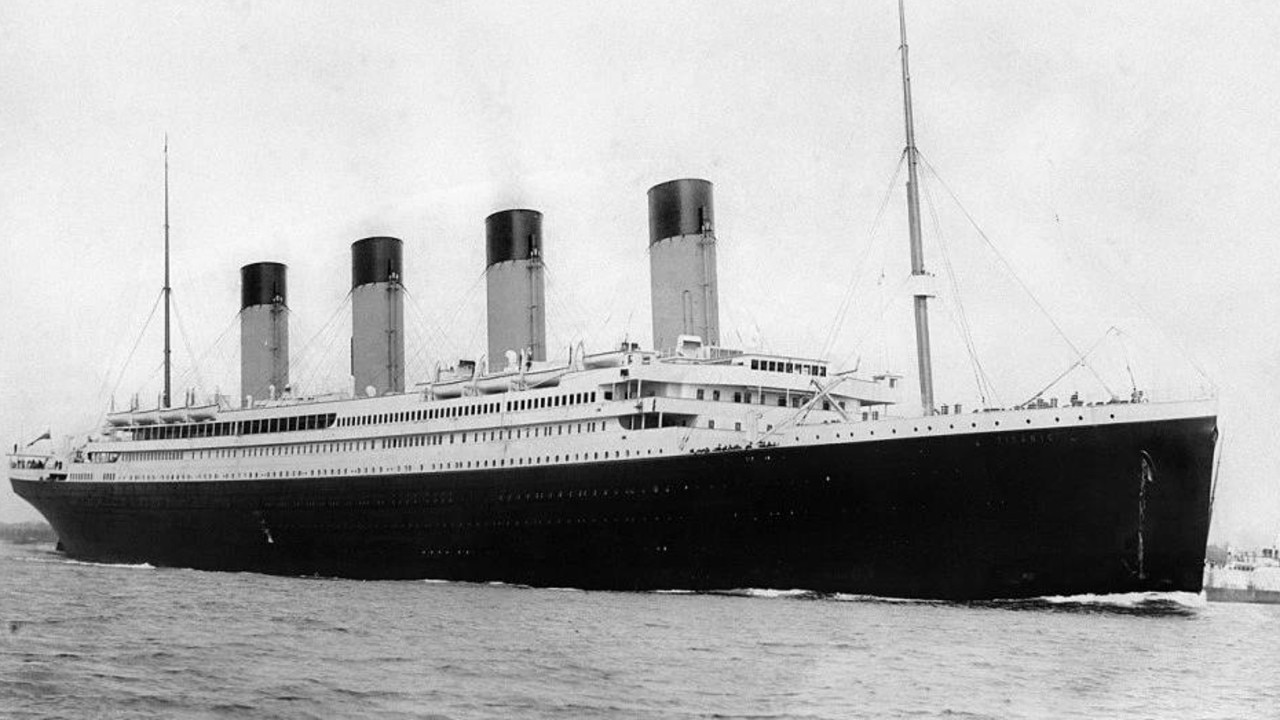 The Titanic, which sank in 1912 crossing the Atlantic Ocean.

Eighty years ago, on April 16, 1939, a man played a trumpet on BBC radio. At least 150 million people around the world listened and many people believed the trumpet caused World War II.

That trumpet was from King Tutankhamun’s tomb in Egypt. Since ancient Egyptian times, people have believed the curse of the pharaohs would befall* anyone who disturbed a pharaoh’s tomb.

It is true that over the next five months, countries built their armies, governments argued with other governments, small battles broke out across Europe and Asia and, by September 1939, World War II began.

There is no proof, however, that the trumpet was cursed or caused the war. 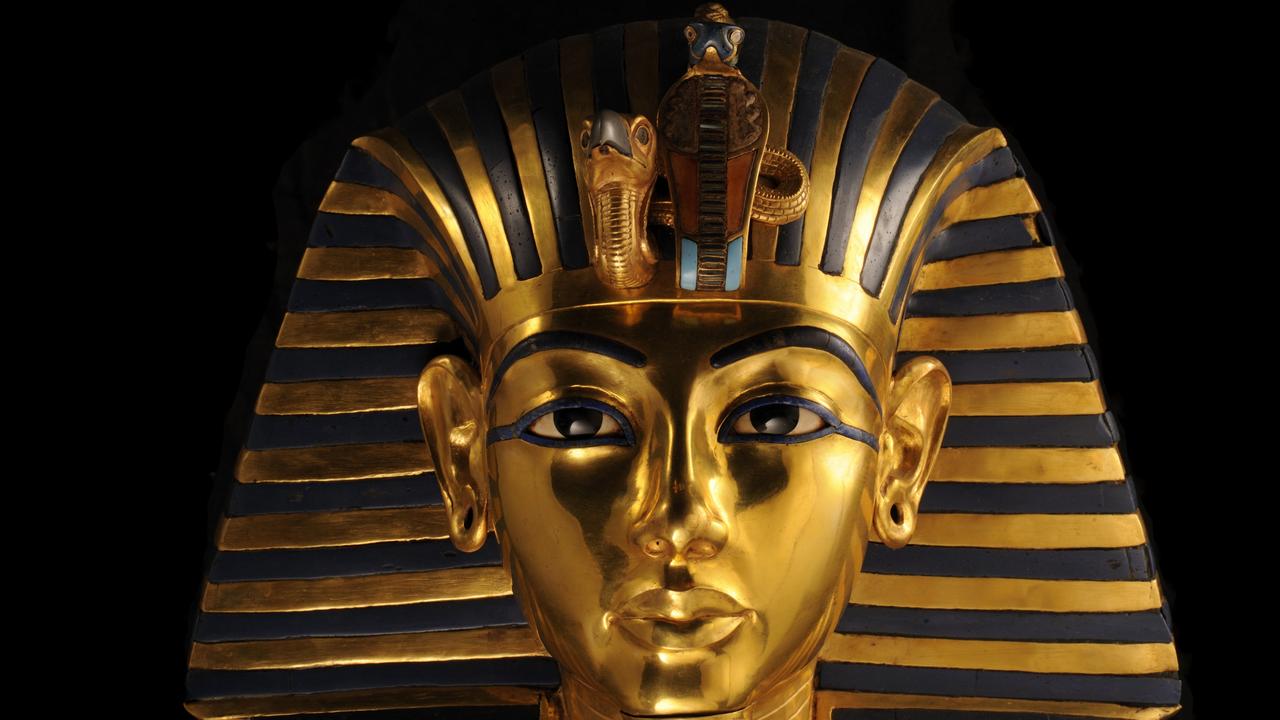 The death mask of King Tutankhamun at The Egyptian Museum, Cairo, Egypt.

People all over the world have always believed curses. The belief is that someone can order some sort of supernatural* harm to come to a person who touches, is near or owns the cursed object. Like the trumpet-causing-the-war story, there is no scientific proof that any curse has ever been true or real. But it doesn’t make the stories any less fascinating.

Kids News looks at some of the world’s most famous curses.

THE MUMMY THAT SANK THE TITANIC
The “Unlucky Mummy” was unearthed in the 1800s and has many unusual tales attached to it.

It was supposedly brought to the UK from Egypt by a “well-known English lady of status*”, but her party was left scarred by the artefact, according to a 1909 recount in Pearson’s Magazine.

“On the return journey of the party, one of the members was shot accidentally in the arm by his servant, through a gun exploding without visible cause. The arm had to be amputated.

“Another died in poverty within a year. A third was shot.

“The owner of the mummy case found, on reaching Cairo (Egypt’s capital), that he had lost a large part of his fortune, and died soon afterwards.”

The bad luck stories about the mummy continued, with the best-known and final story being that the British Museum secretly put the mummy on the Titanic to get rid of it and that it sunk the ship. But no one has ever found any proof it was on the ship. The ‘Unlucky Mummy’ is said by some to have caused the Titanic to sink. picture: The British Museum

CURSE OF THE HOPE DIAMOND
Legend has it that the Hope Diamond — one of the most famous jewels in the world — brings terrible luck to all connected with it.

One version of the story claims the massive, rare blue diamond was stolen from a Hindu temple by a priest who was punished with a slow and painful death for his crime.

Another reports that French merchant Jean-Baptiste Tavernier stole it in the 1600s, before selling it to the French King Louis XIV. Tavernier was struck with a severe fever shortly after he stole the diamond, quickly died and his body was eaten by wolves.

Some believe the story of the curse was made up to get people more interested in it before it was sold at auction. It is now in the National Museum of Natural History in Washington DC, US. The Hope Diamond, which was once owned by the King Louis XIV of France but was stolen during the French Revolution. Picture: AFP

THE JINXED* MEDIEVAL WELL
Pilgrims* once bathed in St Anne’s Well near Liverpool in the UK for its “magical healing powers”.

The well was built to honour a Christian saint* called Anne who supposedly blessed it herself during the late Medieval Period (1066-1485).

It was later cursed by the local priest in the 1700s after an argument with the neighbouring landowner.

The landowner, Hugh Darcy, was soon hit by tragedy.

His son died three months after the curse was placed, and he lost almost all of his wealth.

The legend ends with Darcy’s disappearance. His body was later found at the foot of St Anne’s Well. 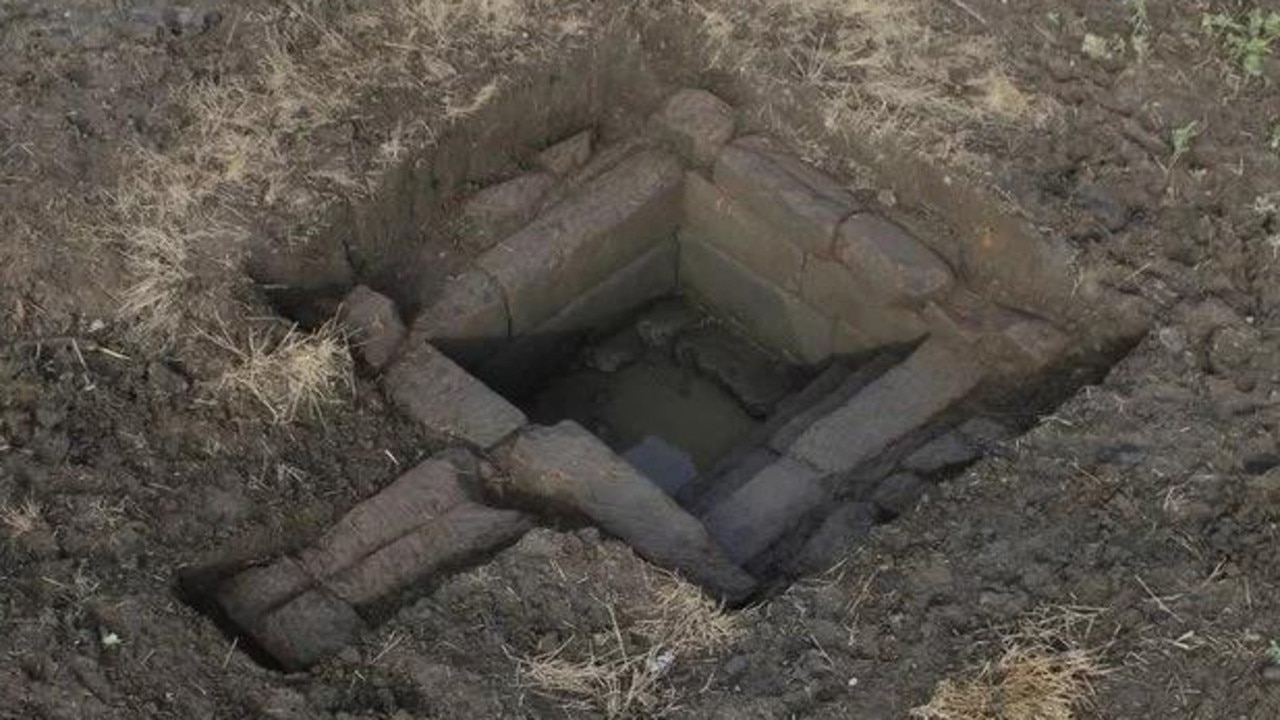 THE CITY CURSED BY JESUS
The city of Chorazin is said to have been cursed by Jesus*.

Now in Israel, Chorazin was once in Galilee, where Jesus lived after he left Nazareth about 2000 years ago.

According to the Christian bible, several of Jesus’ miracles* were performed there but Jesus reported that its inhabitants did not “change their ways”.

He is said to have used his powers to condemn* the entire city and it was abandoned by the year 300. The city of Chorazin in Israel has been deserted for centuries. Picture: Getty Images

CURSE OF THE ROYAL TOMB
The tomb of the Polish King Casimir IV Jagiellon of the 1400s was opened by scientists in 1973.

Inside the tomb, a group of 12 Polish researchers found a rotted wooden coffin containing the king’s body.

Within a few days, four of the team died. Within months, all but two had died after suffering severe lung diseases.

Experts later found traces of three deadly fungi inside the tomb that are known to cause serious illness when breathed in. 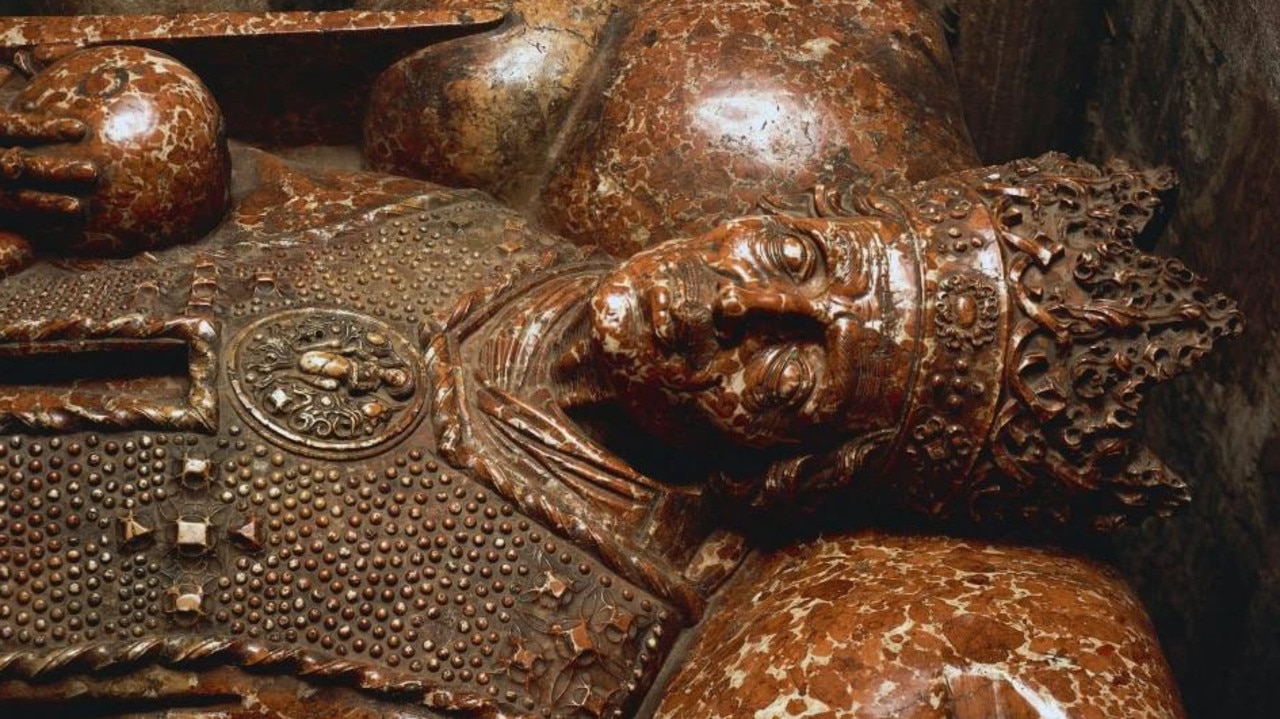 TUTANKHAMUN’S TRUMPETS
Some believe that two trumpets (one bronze, one silver) found in the tomb of Egyptian King Tutankhamun have the magical ability to start a world war.

The trumpets were discovered by famous Egyptologist* Howard Carter in Egypt in 1922, and one of the 3000-year-old instruments was played to the world on BBC radio in 1939.

Five months later, World War II began and some people believed the trumpet made it happen.

According to Egyptologist Hala Hassan, the trumpet was played again by a staff member at the Egyptian Museum in Cairo in 2011.

Just a week later, the Egyptian revolution broke out across Cairo. 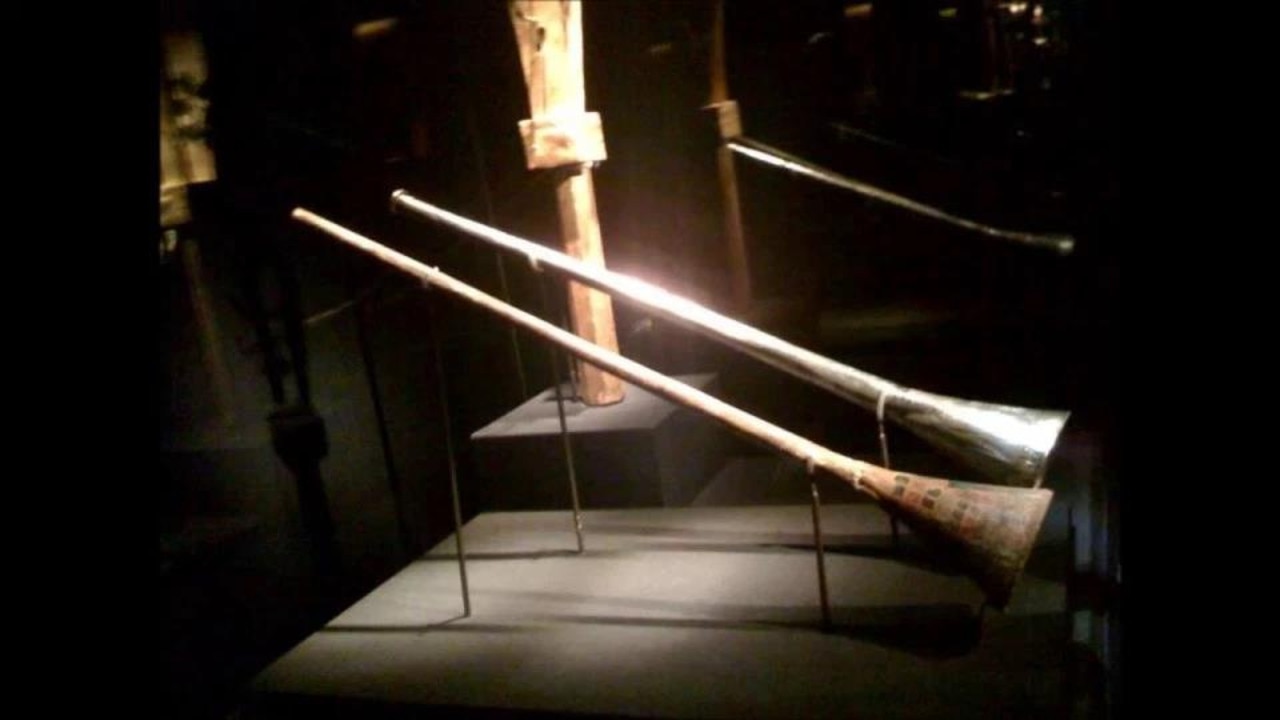 King Tutankhamun’s trumpets were found when his tomb was excavated in the 1920s. Picture: YouTube

This is an edited version of a story originally published in The Sun and is reproduced with permission.

Miracle cure and other crazy ideas

CLASSROOM ACTIVITIES
1. What’s the real reason?
Do you believe that World War II began by the playing of a cursed trumpet?

2. Extension
Superstitions are like curses, something that people believe even with no scientific evidence that it can be true.

Do you follow or believe any superstitions? Some examples are: not walking under a ladder, believing bad luck will follow breaking a mirror, breaking the ‘wishbone’ after a roast chicken (or turkey).

Research at least five different superstitions that you have not heard of before.

VCOP ACTIVITY
If enough people believe the story, anything could happen! A lot of the times curses and superstitions come from a wild tale from someone’s imagination or exaggeration, that is told and retold until it’s believed as fact.

Imagine you are a reporter from the past. Pick one of the below stories to turn into a newspaper article. You’ll have to pretend you were there to interview a few people about the event. You can decide if you are creating the article believing the story, or stating that there is no evidence to back up the tale. Decide what you think will sell newspapers.

Remember to use your imagination and VCOP to add a lot of voice to your article so that people want to read the whole thing.

HAVE YOUR SAY: Why do you think people believe curses? Which one do you want to know more about?
No one-word answers. Use full sentences to explain your thinking. No comments will be published until approved by editors.