Modern building sites digging up the historical past beneath our cities The remains of Melbourne's first school have been uncovered by the Metro Tunnel archeological dig on Swanston Street. Excavation Director Geoff Hewitt with some of the items from the kitchen. Picture: Nicki Connolly

A wealth of rare buildings and historic items from Australia’s past have recently been unearthed* on building sites across the country.

This week, the remains of Melbourne’s first school have been uncovered by the Metro Tunnel archaeological* dig on Swanston St.

Researchers have discovered the kitchen of Roxburgh Ladies Seminary — a seven-room cottage built by Melbourne founder John Batman in 1837. Some of the artefacts found at Melbourne’s first school including pottery and glass shards. Picture: Nicki Connolly Researchers unearthed roughly cut cattle bones that would have been used in soups and stews served to students, a porcelain doll’s head that resembles a headmistress*, part of a woman’s comb and sandstone footings of the school’s kitchen area.

“It’s like looking into the keyholes and windows of the distant past,’’ he said.

The remains were found under the concrete slab of a former McDonald’s restaurant.

History Council of Victoria chairwoman Liz Rushen said she was delighted with the discovery.

“It’s the foundation of Melbourne as a civilised* place with schools and people dining with fine china*,’’ she said.

The Melbourne school discovery joins a list of other recent significant finds in the past 18 months across our states.

Archaeologists earlier this month unearthed the footings of a house built in the 1850s by ship owner John Stevens, along with artefacts from the same era including tiny porcelain dolls, tea sets, cooking equipment, glass and crystal drinkware, a copper alloy* brooch and ink pens. 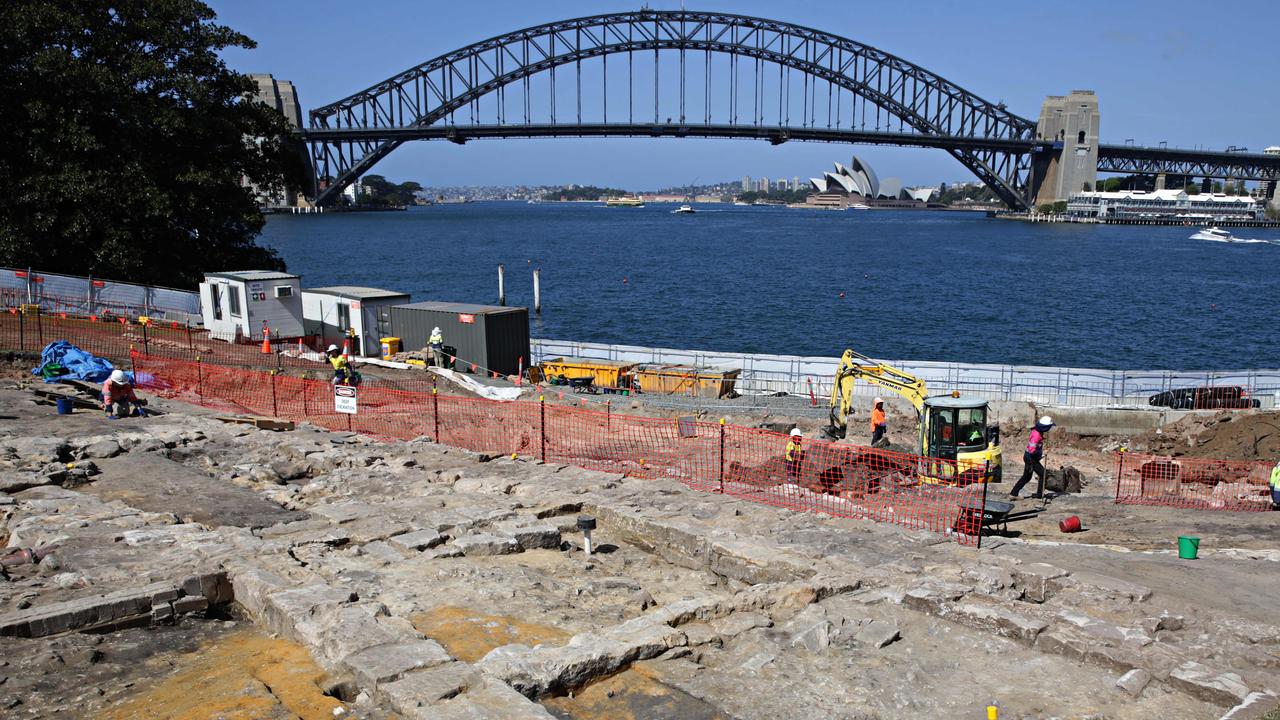 House foundations dating back to the 1800s were discovered during excavation work at the Blues Point Reserve worksite.

Preliminary work at the Blues Point temporary retrieval site near Sydney Harbour will continue for another three months, forcing a delay in the Metro City and Southwest rail project, which is expected to be completed in 2024.

The significant finds tell the story of early settlers’ lives at home and work in Sydney between 1850-1900.

A Sydney Metro spokesman said many of the bowls, plates and dishes were made in the UK and decorated in handpainted or transfer-printed patterns.

Over the past three years, archaeologists and historians have discovered gun flints* that were issued to British soldiers, glass from gin and beer bottles, china and nails at the Kerry Lodge convict* site just outside Launceston.

About 40 convicts worked to quarry stone at the site for the nearby Kerry Lodge bridge that was built in 1835.

Researchers on the three-year project also found a fireplace and walls of a cottage and a kitchen after the search area was expanded.

A dig in the centre of a Fremantle shopping mall has revealed items from a blacksmith’s* workshop.

Along with hundreds of horseshoes and leather working tools, the Kings Square renewal site also uncovered tools and wheel parts from an early coach building business.

Many of the items found near an old hall are believed to date to the mid to late-1800s.

Fremantle’s first church foundations, which were much bigger than originally thought, will become a lasting monument at the site with glass windows to be installed as part of the Kings Square project allowing visitors to view the historic footings.

Last year, a dig in the heart of the Adelaide CBD, at a Waymouth St site earmarked for an apartment development, uncovered the remains of the “new” Queen’s Theatre, built in the mid to late 1840s.

The project also revealed a tavern, a tobacco importer’s warehouse, a horse market and a deep well. The “old” Queen’s Theatre, which dates to 1840, still stands next door. Ms Cincunegui said the story they told was of how different, and more affluent,* Adelaide was in its early days, judging by the demand for luxury goods revealed by the dig.

“What we get from this is people are drinking very different alcohol to the eastern states and (smoking) different types of tobacco pipes,” she said.

“People from South Australia are free settlers, so you’re going to get a different assemblage* of artefacts (as) people were more affluent.”

Early last year, the discovery of artefacts near Kadadu ignited the world’s imagination about what life was like 65,000 years ago.

Previously it was thought the continent was inhabited only by megafauna — huge kangaroos that towered over humans and wombats the size of rhinos — but items found in the archaeological site showed humans may have lived alongside these massive animals for at least 20,000 years.

“The site contains the oldest ground-edge stone axe technology in the world, the oldest known seed-grinding tools in Australia and evidence of finely made stone points which may have served as spear tips,” lead researcher University of Queensland Professor Chris Clarkson said.

In February this year, workers upgrading one of Brisbane’s busiest roads uncovered a historic bridge dating back about 150 years.

The surprising find at Kingsford Smith Drive is believed to be one of the first bridges built in Queensland. 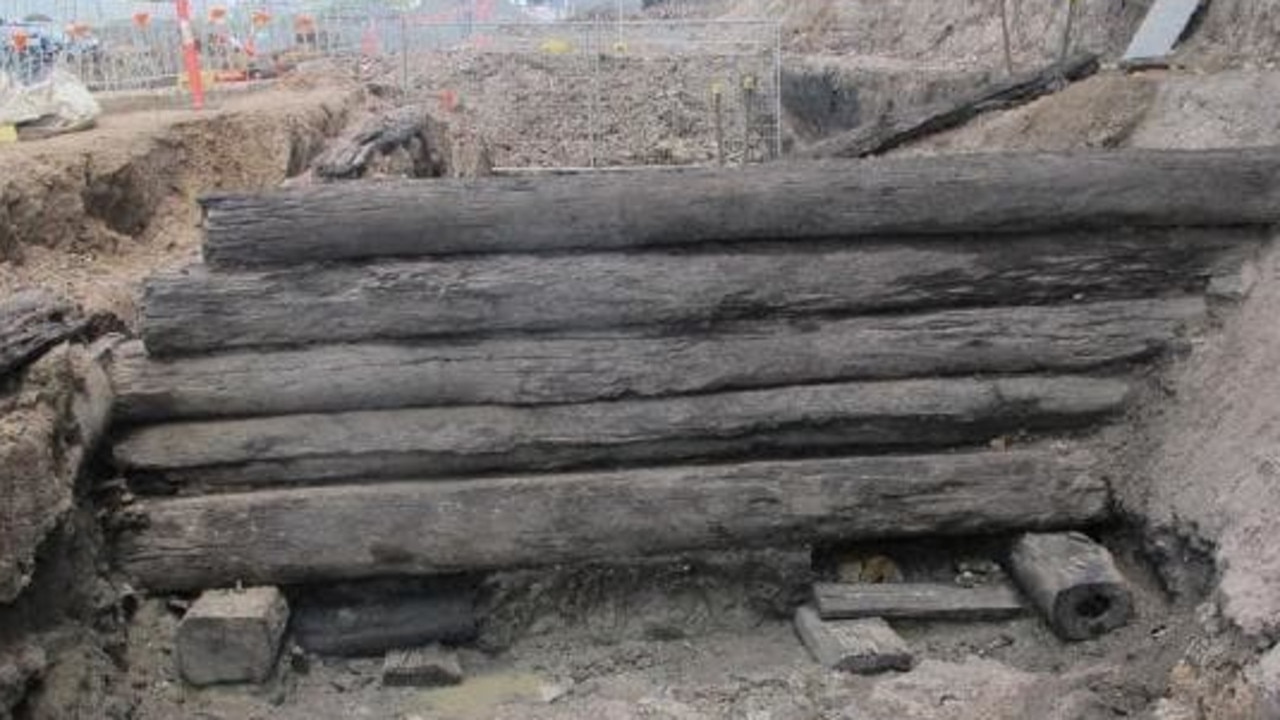 Brisbane City Council infrastructure committee chairwoman Amanda Cooper said there was still much to be learned about the structure which will be preserved*.

“A small section of the structure will be required to be removed to allow for the upgrade project to continue, and it is council’s intention for the piece to be preserved, potentially along the new corridor, while ensuring the remainder of the structure be covered and preserved in its original place,” she said.

Cr Cooper said the original road was built by convict women in the late 1820s.

archaeological: relating to scientific study of historic or prehistoric peoples and their cultures by analysis of their artefacts, inscriptions, monuments, and other such remains, especially those dug up.

remnants: part of something

scarce: not enough or not many of

civilised: more advanced in society and way of life

blacksmith: person who makes and repairs things in iron by hand

assemblage: a collection of things

preserved: keep in its current state

1. What building has been found under Melbourne’s Metro tunnel site?

2. What was found that indicates a “civilised” lifestyle in Melbourne at that time?

3. What items in Fremantle suggested a blacksmith’s workshop had been found?

4. How was Adelaide different to the eastern states in the mid-1800s?

5. How many years old were the stone axes found in the NT?

1. Windows of the Distant Past

Archaeologist Geoff Hewitt is quoted in the article saying these archaeological finds are “like looking into the keyholes and windows of the distant past”.

Design an artwork representing this quote, a keyhole or window design limited by only your imagination. Within your window or keyhole, choose the archaeological discoveries that fascinate you most to draw inside.

Your artwork should represent one, or a few of these archaeological discoveries

Extension: Which archaeological find do you think is most significant to Australia’s history and why?

HAVE YOUR SAY: If researchers were to dig up one your favourite items in 1000 years’ time, which item do you hope it would be and what would it tell them about your life now (eg, a mobile phone would reveal our communication style)?