Lost city found with radar and a quad bike An ancient Roman city in Italy has been mapped in incredible detail without any digging. Instead, archaeologists* used a ground-penetrating radar* strapped to a quad bike.

Falerii Novi is more than 2000 years old but today is mostly underground, leaving many of its ancient buildings undiscovered until now.

Scans of the site reveal a bath house, theatre, shops and even the city’s entire plumbing system.

The technology allows researchers to survey vast* regions trapped beneath Earth’s surface without having to do time-consuming excavations*.

The technology was used at Falerii Novi, a walled city spanning 30ha about 50 km north of Rome.

Falerii Novi was founded in 241BC during the time of the Roman Republic and was inhabited until around 700AD in the early Middle Ages.

The city, not quite half the size of ancient Pompeii, had previously been partially excavated but mostly remained buried.

With a population of perhaps 3000 people, it had a very fancy public bath complex and market building, at least 60 large houses and a rectangular temple with columns near the city’s south gate.

Near the north gate was a public monument unlike any other, with a colonnaded portico — a roofed structure supported by columns — on three sides and a large open square measuring 40m by 90m. 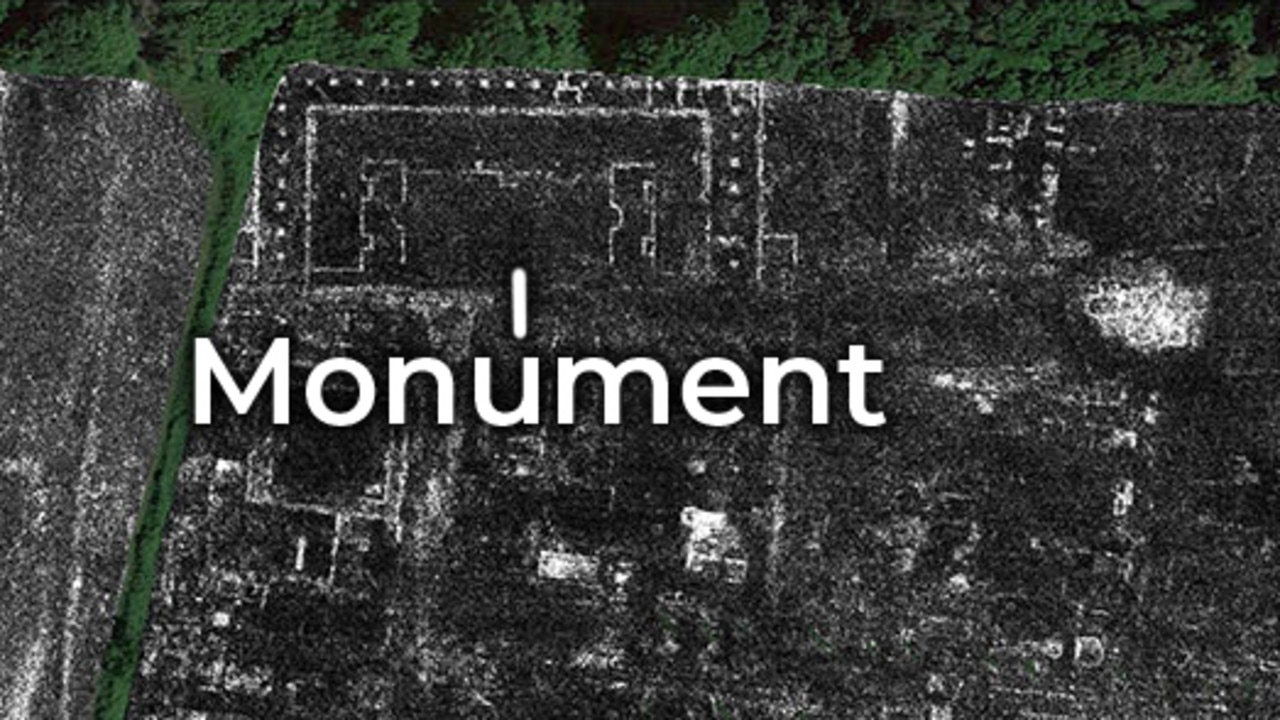 The porticus duplex and public monument to the east of Falerii Novi’s north gate, near Rome, shown on a GPR time-slice, at an estimated depth of 0.80-0.85m, as the white dots mark the central row of columns of the covered passageway. Picture: AFP/L. Verdonck/University of Cambridge The newly discovered temple in the Roman city of Falerii Novi, near Rome, Italy. Picture: AFP/L. Verdonck/University of Cambridge

Falerii Novi had a network of water pipes running beneath the city blocks and not just along streets, indicating advanced city planning like we would expect in a modern city.

Working in a similar way to regular radar, GPR bounces radio waves off objects and uses the “echo” to build up a picture at different depths.

The GPR equipment was pulled over the surface using a four-wheel motorbike, or quad bike.

“This took one person about three to four months in the field*,” Prof Millett said.

“This really does change how we can study and understand Roman towns – the way of the future for archaeology.” The GPR equipment was pulled over the surface using a four-wheel motorbike. Picture: AFP/ L. Verdonck/University of Cambridge

Prof Millett and his colleagues have already used GPR to survey the ancient Roman settlement of Interamna Lirenas in central Italy, and, on a lesser scale, Alborough in North Yorkshire, UK.

They now hope to see the technique used on far bigger sites.

“It is exciting and now realistic to imagine GPR being used to survey a major city such as Miletus in Turkey, Nicopolis in Greece or Cyrene in Libya”, said Prof Millett.

“We still have so much to learn about Roman urban life and this technology should open up unprecedented* opportunities for decades to come.”

The research was published in the journal Antiquity. 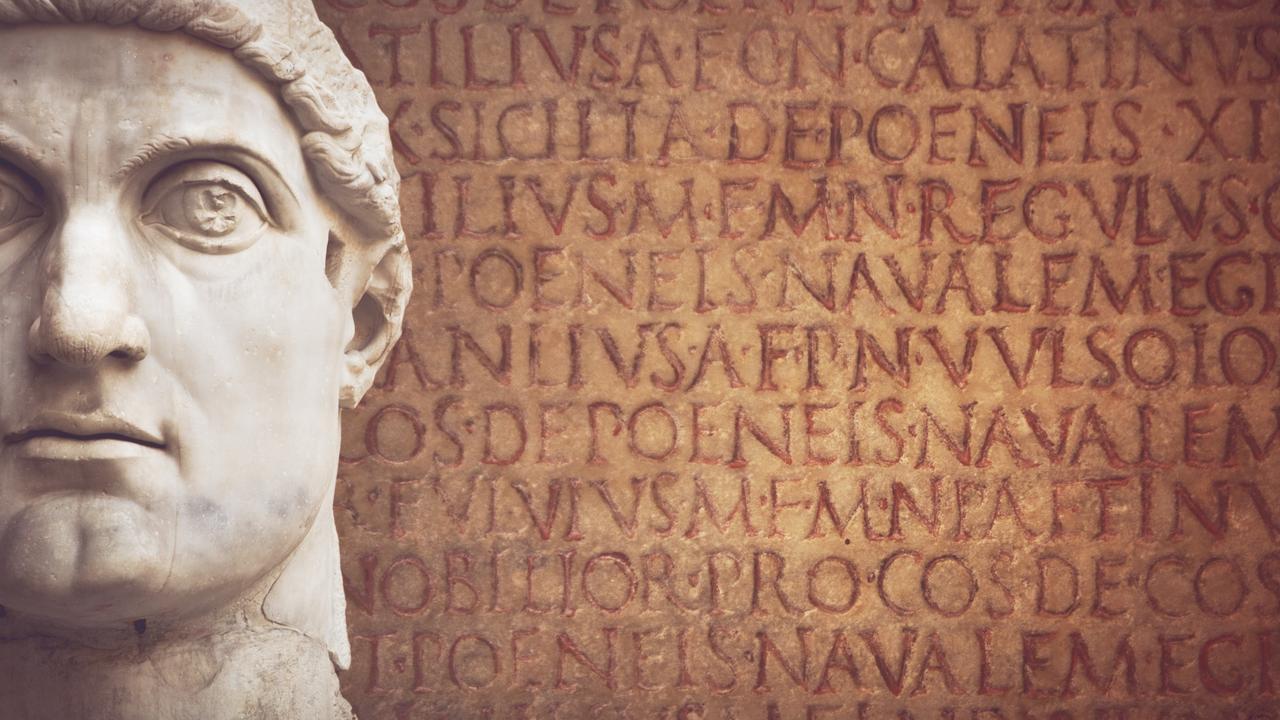 A statue of Roman Emperor Constantine with Latin language behind.

THE ANCIENT ROMAN EMPIRE
The Roman Empire began soon after the founding of the Roman Republic in the 6th century BC (600BC to 501BC).

It was a powerful empire for around a thousand years until 476AD.

During this time, the Romans ruled over many countries in Europe and parts of Africa and the Middle East

At its peak, 90 million people lived in the Roman Empire.

It evolved from a monarchy* to a democratic republic to a military dictatorship* and then was finally ruled by emperors.

One of the most well-known and successful Roman leaders is Julius Caesar.

Latin language, straight roads, well-planned cities, underfloor heating and the spread of Christianity are all attributed to the Romans. Leaning tower of Pisa not leaning so much anymore

CLASSROOM ACTIVITIES
1. GPR of your Town
Imagine we are 2000 years down the track and the town you live in or near has been lost over time or buried. Technology would be even further advanced. However, if they were to use this Ground-Penetrating Radar technology to map what your town looked like (major landmarks, roads, buildings etc) draw a rough birds-eye view sketch of some of the major features they would find. You may choose to work with a partner as often two brains are better than one.

Present your town map to the class.

2. Extension
List some of the limitations of physically digging to find these ancient cities that this new technology overcomes.

VCOP ACTIVITY
Underground Lair
Welcome to Spy Kids. Your assignment is to take the new ground-penetrating radar attached to your stealth quad bike, to discover the location and extent of Dr X’s evil plans.

Keep a journal of your trek and your discoveries and send them through as you camp each night.

We expect this to be a 3-day mission, but you must maintain contact with base should you need extraction or back up.

Once you discover Dr X’s location, send us a detailed plan of what the radar picks up.

Read the article of our test of the radar’s capabilities as we sent teams to go undercover as archaeologists to discover Spy Kids’ Roman ancestors.

HAVE YOUR SAY: What buried treasure or place would you like to discover?
No one-word answers. Use full sentences to explain your thinking. No comments will be published until approved by editors.