The Dog on the Tuckerbox statue near Gundagai, NSW was vandalised and police are investigating. Picture: Lost Gundagai/Facebook

One of Australia’s most recognised and loved statues has been damaged.

A man has been charged for allegedly vandalising* the iconic Dog on the Tuckerbox statue at Gundagai.

About 4pm on Saturday, July 27, a motorist travelling along the side of the Hume Highway, Gundagai, noticed a man vandalising the statue.

The statue commemorates Australia’s pioneer history and was inspired by the bullock drivers’ poem Bullocky Bill, which celebrates the life of a mythical driver’s dog that loyally guarded the man’s tuckerbox until death.

A community Facebook page described the vandalism as a “malicious deed” and said the dog’s ear had been found by a local kiosk worker.

A 28-year-old Wagga Wagga man handed himself in to police on Monday morning and has been charged with one count of property damage. He will appear at Wagga Wagga Local Court on September 11.

The statue, visited by thousands of tourists every year, was rocked from its base and knocked into the fountain below.

It was damaged during the fall, the dog losing one of its ears.

Outraged locals took to the Lost Gundagai Facebook page to vent* their sadness and fury after the statue was damaged.

“The Dog on the Tuckerbox is so iconic* that we feel as though an assault has been committed on an innocent animal and not a statue,” Leslie Allen posted.

“He represents everything that is our culture, history and legacy*. Poor little thing.” 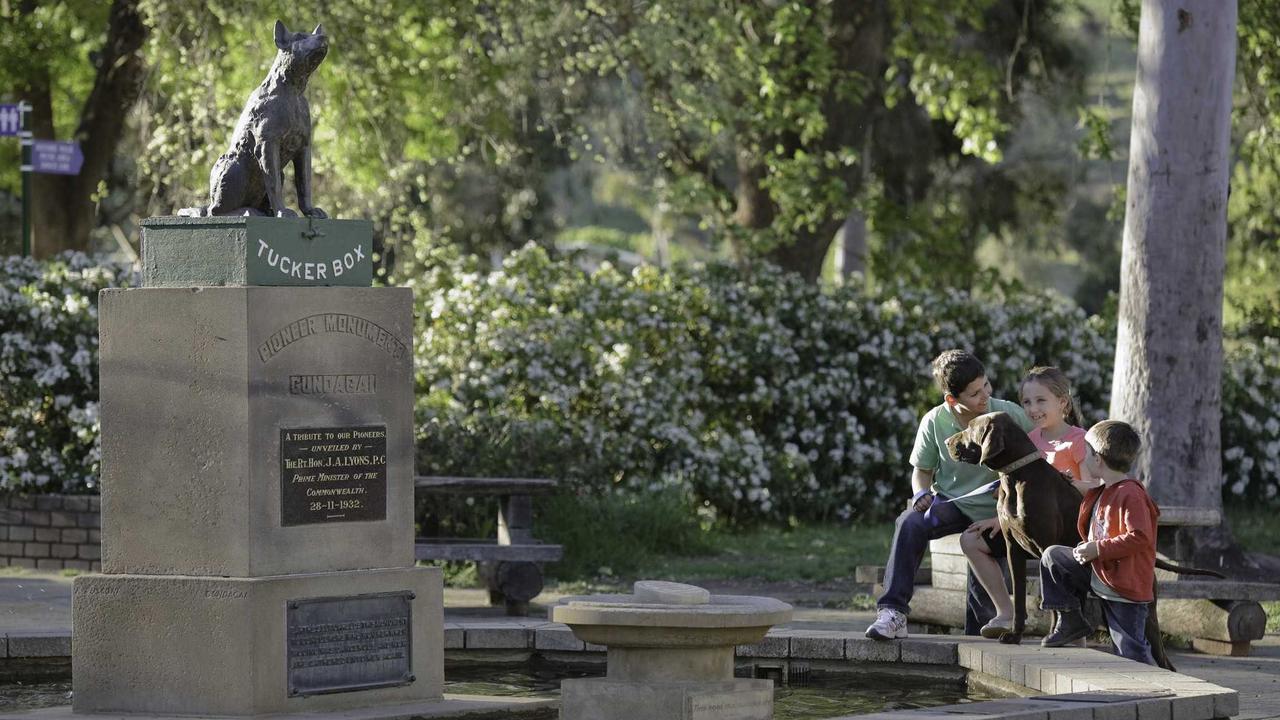 A family stops to look at the Dog on the Tuckerbox near Gundagai, NSW.

DOG ON THE TUCKERBOX
The Dog on the Tuckerbox is a small statue inspired by a famous Australian poem called “Bullocky Bill” that celebrates the life of a mythical* bullock driver’s dog that loyally guarded his owner’s lunch.

A tuckerbox is an old Australian word for a lunchbox. A bullock is the Australian name for an ox.

The story of the Dog on the Tuckerbox has been around since at least the 1850s, when explorers and pioneers travelled through the area. Supplies were brought from Sydney by wagons pulled by bullocks. There were no proper roads and the journeys were often delayed because rivers and creeks were too difficult to cross or the wagons became bogged. If the drivers — called bullockies — had to leave their wagons to get help, their dog would sit patiently and guard the wagon and supplies until they returned.

To pass the time while waiting for water levels at a river to go down or for help to arrive, the bullockies would recite and write stories, poems and songs.

Someone who called themselves Bowyang Yorke and who was probably a bullocky wrote the humorous poem “Bullocky Bill”, about the misfortunes that happened to bullockies. No one really knows who Bowyang Yorke was.

The current statue was unveiled in 1932 by then Prime Minister Joseph Lyons as a tribute to pioneers.

It is by the side of the Hume Hwy at Snake Gully, 7km outside Gundagai, which locals at the time decided was a better location to attract visitors. Thousands of people stop to look at the Dog on the Tuckerbox each year and most take a photo of their visit. This is tourist Ray Parsons’ photo of his visit many years ago. Picture: supplied

Gold finds kept a secret before the Rush

VCOP ACTIVITY
An icon damaged and hearts broken!
While to some people it is only a statue, to the town of Gundagai and many Australians, it is a very famous and treasured landmark. But it doesn’t have to be a landmark vandalised to cause hurt, it could be much smaller and much closer to home.

Imagine some of the items or places in your world that are important to you: your school, your classroom, your house, pets, personal items, maybe a trophy or a special toy.

Now imagine someone damaged it on purpose. They didn’t necessarily do it to hurt you, they more did it because they were showing off to others, or thought it would be funny, or they were bored and they thought it would be entertaining. In general, they don’t have a good excuse to vandalise property, and they very rarely think about other people’s feelings.

How would you feel if something important to you was damaged? Maybe you didn’t think it was that important until it was damaged.

Discuss your thoughts and opinions in a group of 3 to clarify your ideas, then write a letter to the vandals explaining how you would feel if this happened to you.

Or write to the community of Gundagai expressing your sympathies.

Remember to use your writer’s voice and to edit and uplevel when you have finished.

HAVE YOUR SAY: Have you or would you like to see the Dog on the Tuckerbox? What is the best statue you have seen?
No one-word answers. Use full sentences to explain your thinking. No comments will be published until approved by editors.