So many treasures were found in Tutankhamun’s tomb when it was discovered by British archaeologist Howard Carter in 1922, but scientists still don’t know for sure what killed the “Boy King”. Picture: AAP

The tragic final months of King Tutankhamun’s life have been explored in a new documentary.

The “Boy King”, who ruled Egypt 3000 years ago, suffered from bouts of malaria* and a broken leg before his death at the age of just 19.

In the years prior to his death, the famous pharaoh is also believed to have limped with a crippling foot condition that left him disabled. The Supreme Council of Antiquities and the National Geographic Society released this image of King Tutankhamun which was created by French scientists using about 1700 high-resolution photos from CAT scans of his mummy to reveal what he looked like the day he died 3300 years ago. Picture: AP

He is most famous for his age – experts believe the boy was aged just nine when he began his reign of the world’s most powerful empire.

His death 10 years later has puzzled experts for decades. Some believe he died of a broken leg or other accident, while others suspect he was assassinated*.

British historian and broadcaster Bettany Hughes travelled to Cairo’s Egyptian Museum for the documentary to speak to researchers who work with some of the country’s famous royal mummies. British historian Bettany Hughes spoke to researchers who work with some of Egypt’s famous royal mummies for the Tutankhamun: Waking the Dead documentary.

Professor Sahar Saleem, a radiographer and mummy expert, was part of a crack team that scanned and sampled Tut’s remains last year.

They revealed that the pharaoh might have spoken with a lisp thanks to an overbite and a slight cleft palate*.

“With communication and public profile essential for any ruler, the Boy King may have been facing a big challenge straight away,” Ms Hughes said.

When Tut took control of an empire at the height of its powers, his health was one of the biggest obstacles he faced.

More than 130 walking sticks found in the ruler’s tomb are thought to have been required due to a crippling foot condition.

“The right and the left foot appear to look quite different from each other,” Dr Carolyn Rando, an archaeologist at University College London, told Ms Hughes.

“We can see that his left foot has quite a high and marked arch, while his right foot is almost completely flat. X-rays show signs of tissue death on his right foot, likely the result of a painful bone infection that left him disabled.

DEATH ON THE NILE

Archaeologists have for decades argued that Tut was murdered as a result of a power struggle at the very top of the Egyptian regime.

Based on a dark patch visible in early imaging efforts that was thought to be a pool of blood, experts had argued that the boy was killed with a blow to the head. However, this is not backed up by later CAT scans.

Dr Rando said Tut’s skull was intact and lacked any obvious signs of trauma, suggesting that no fatal head injury had occurred.

She said the dark patch seen in earlier images was in fact resin that had pooled there during the mummification process. Other theories have suggested the boy suffered a horrific leg break in a chariot accident and later died of sepsis*.

Scans show signs of fracture on his left femur*.

“This could suggest that he’s had some sort of impact from the side, hitting the top of his left knee,” Dr Rando said.

“It could have dislocated it and caused this large, potential fracture.

“It’s difficult to say how close to his death this happened. There’s no healing, so he didn’t survive long after it.”

If the skin was broken, the wound was likely infected and could have easily gone septic*, Dr Rando said.

She said this could have very quickly led to death, although it was impossible to know if sepsis was indeed what finished Tut off.

But there’s another theory about what killed the young ruler. 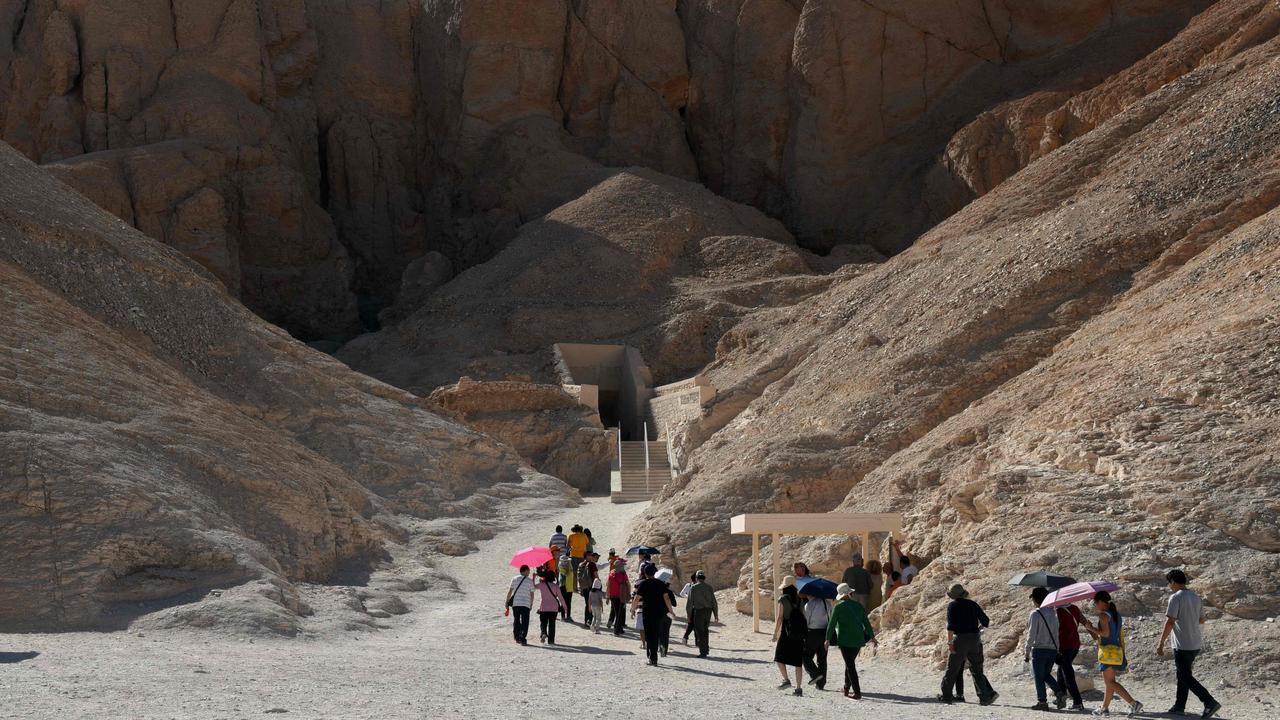 Tourists walk outside King Tutankhamun’s tomb at the Valley of the Kings, near Egypt’s southern city of Luxor in 2016. Picture: AFP Photo

DNA samples collected from the pharaoh included genes from the parasite that causes malaria.

Evidence suggests that Tutankhamun suffered bouts of the disease on a number of occasions throughout his short life.

It’s thought that the disease, which is passed to humans by mosquito bites, may have weakened the king.

A viral infection could have then finished the job while he was in a vulnerable* state. Archaeologists don’t know for sure, however – and may never find out.

Tut’s tomb was unearthed in the East Valley of the Kings near Cairo by British archaeologist Howard Carter in 1922.

The find was unusual in that the site had never been visited by looters, leaving the lavish treasures inside undisturbed for 3300 years.

It remains one of the most famous archaeological discoveries of all time. CLASSROOM ACTIVITIES
1. What would you do?
What would you do if you became the ruler of Australia? Write down three laws that you would put in place. For each law, write an explanation of why you chose it.

2. Extension
How does science help us to learn more about history? Use information in the story and other examples that you know about to write paragraphs answering this question.