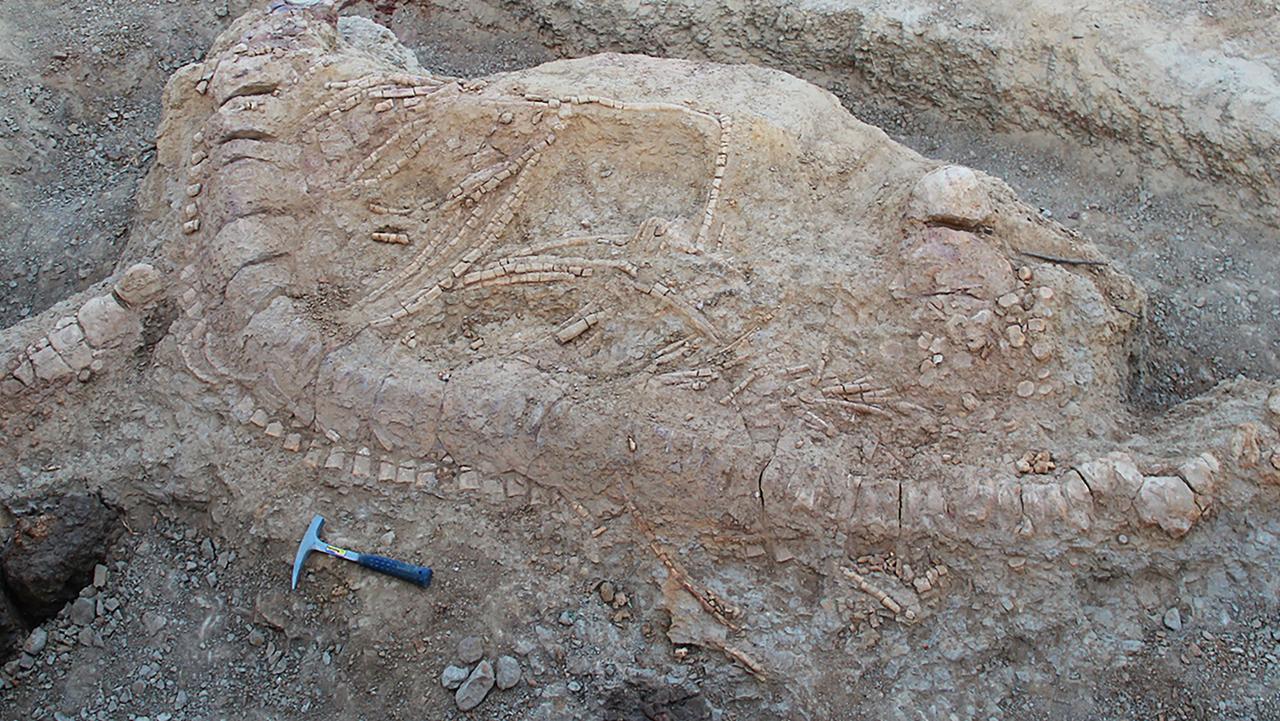 An almost complete fossil of a giant ‘lizard fish’ has been unearthed in India.

It’s the first time the 150-million-year-old fishlike reptile Ichthyosaur has been found on the subcontinent*.

But despite coming in at 5.5m long, this Jurassic-era sea monster doesn’t top the Ichthyosaur scales, with some adult specimens measuring a whopping 9m.

Details of the sea monster discovery have been published in the academic journal PLOS One by the University of Delhi. Artist’s impression of an Ichthyosaur.

Ichthyosaur fossils have mostly been found in North America and Europe. A few have been uncovered in South America and Australia.

This one, found embedded* in the very hard sedimentary* rock of Gujarat in northwestern India, is almost complete.

After a labour-intensive excavation that took 1500 hours of work, only part of the skull and some of its tail bones were found to be missing. Its left forefin was remarkably well preserved in its original shape.

The creature likely lived between 152 and 157 million years ago.

A close examination of the large cracked teeth in the fossil shows the Ichthyosaur preferred crunchy food. “We could infer* from wear patterns on its teeth that this Ichthyosaur was a top-tier predator that fed on hard and abrasive* food material, including marine molluscs, fish and possibly other marine reptiles,” lead researcher Guntupalli Prasad said.

“This is a remarkable discovery not only because it is the first Jurassic ichthyosaur record from India, but also it throws light on the evolution and diversity of ichthyosaurs in the Indo-Madagascan region of the former Gondwanaland and India’s biological connectivity with other continents in the Jurassic,” Prasad wrote. Backbone of another Ichthyosaur.

“This find helps to show how globally widespread Ichthyosaurs were during the time of dinosaurs,” University of Edinburgh palaeontologist* Steve Brusatte told National Geographic. “They seem to have lived everywhere in the oceans, all over the world, at the same time dinosaurs were thundering across the land.”

sedimentary: made from layers of material deposited by air and water

Create a mind map for an Ichthyosaur containing all the facts included in the article.

Activity 2. Creatures of the past

This Ichthyosaur was thought to have lived between 152 to 157 million years ago. Work with a partner and research what other creatures, including dinosaurs, were living in this period. Present all the creatures you can find on a poster, describing each one.

Extension:
Mark on a world map where the Ichthyosaur fossils have been found.

Write a short story about discovering an Ichthyosaur.
Think about how to hook the reader in your opening paragraph.
Perhaps you could start with a question, statement or onomatopoeia.

Write a list of all the adjectives in the article.
Have you used these in your short story?
If not, up-level your writing by adding some of them to make your writing more descriptive.