Huge find in Egypt’s ‘City of the Dead’ 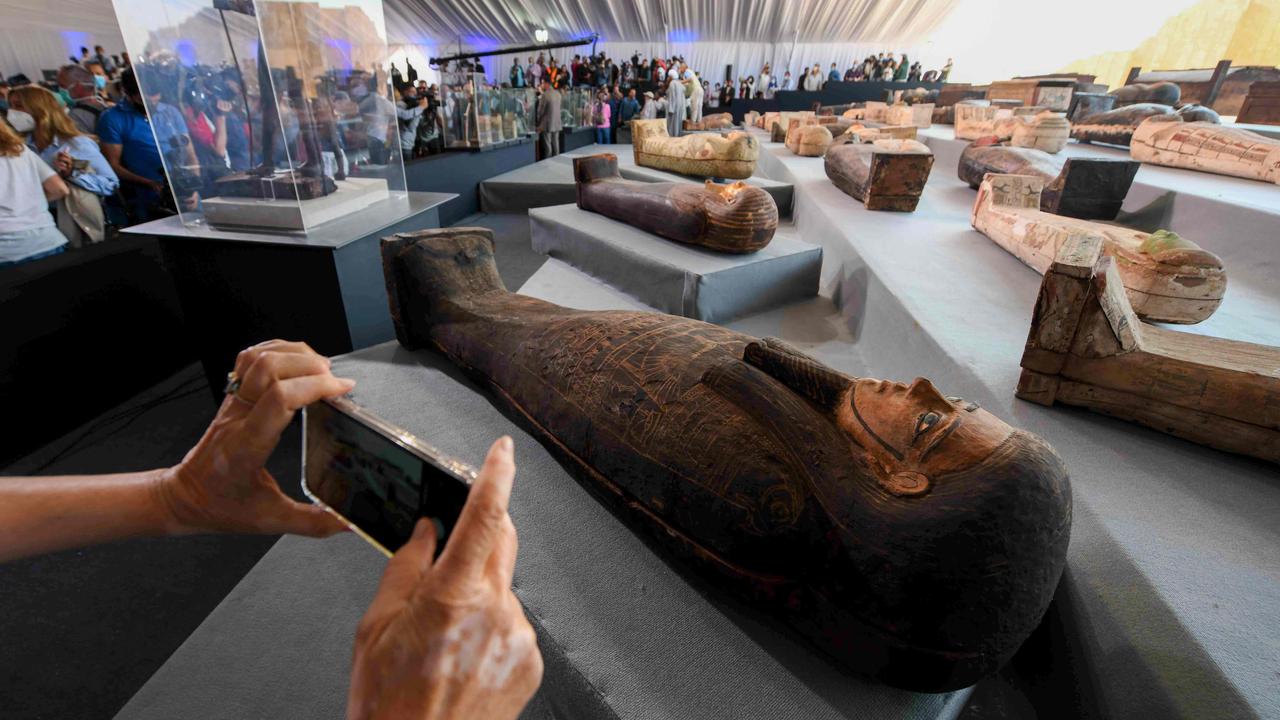 Wooden coffins on display during the unveiling of an ancient treasure trove of more than 100 intact coffins at the Saqqara necropolis 30km south of the Egyptian capital Cairo, on November 14, 2020. Picture: AFP

The coffins, some of which have mummies inside, have been sealed and buried for about 2500 years.

Egypt’s Ministry of Tourism and Antiquities* have displayed the huge find at a temporary exhibit near Saqaara’s step pyramid. 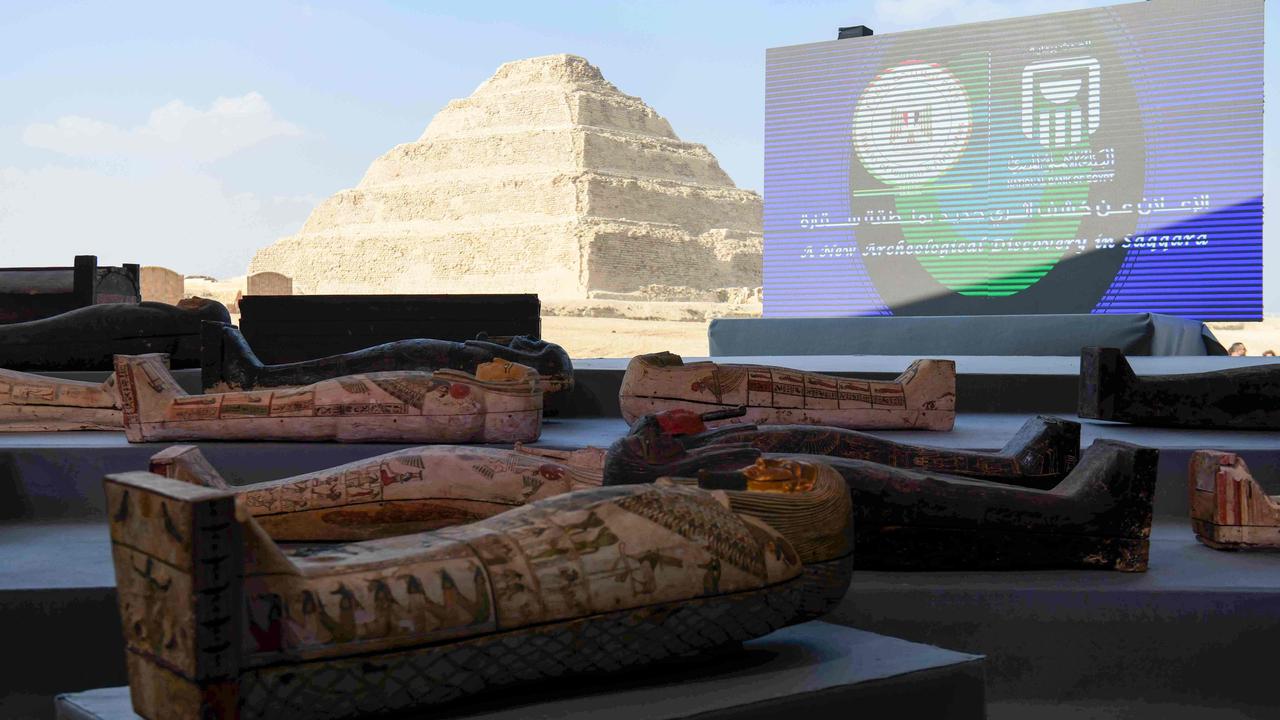 Wooden coffins on display during the unveiling of an ancient treasure trove at the Saqqara necropolis 30km south of Cairo, Egypt, on November 14, 2020. Picture: AFP

Experts opened a coffin in front of visiting journalists, revealing a wrapped and well decorated mummy inside.

They then X-rayed the mummy to see how well the human remains had been preserved inside.

They were found underground in an area nicknamed the ‘City of the Dead’.

The coffins and statues will be moved to three museums including the new Grand Egyptian Museum next to the pyramids. 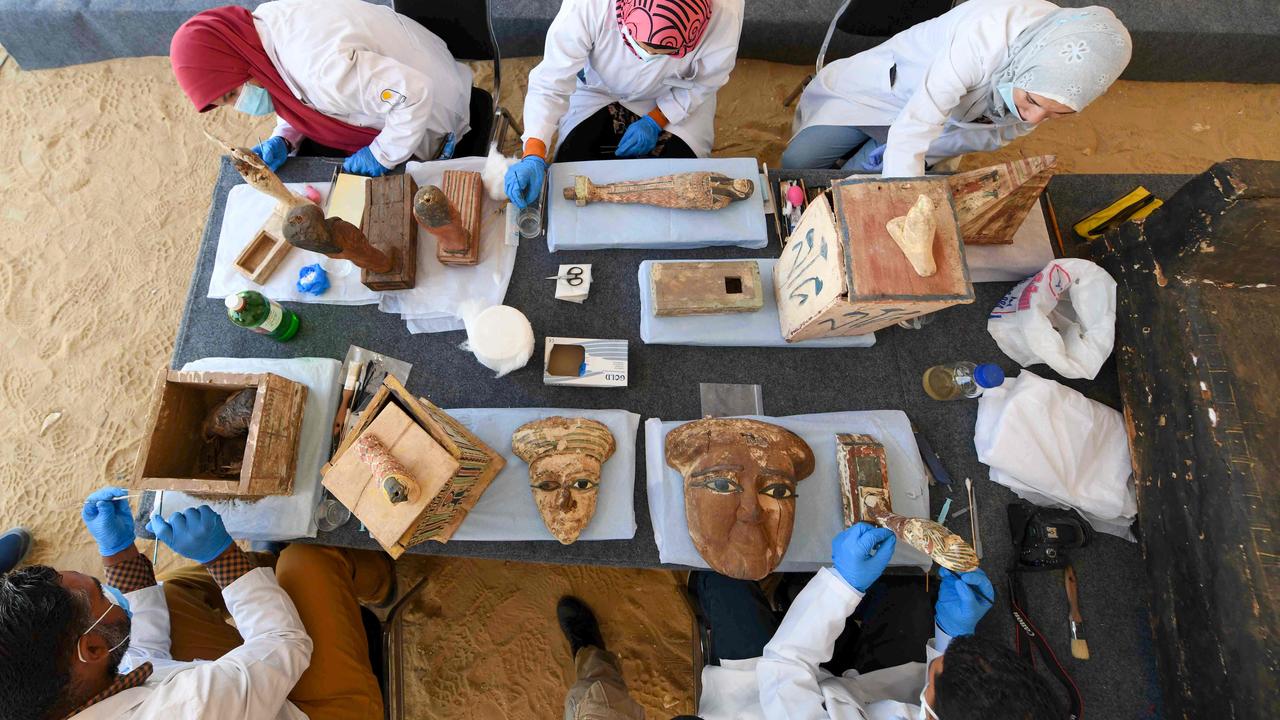 The latest discoveries brings to 140 the total number of sealed coffins that have been revealed at Saqaara since September this year.

Egypt’s tourism and antiquities minister Khaled el-Anany said another announcement about a big discovery from the Saqqara necropolis will be made later this year.

The mummies and their coffins will be studied by skilled experts, who are hopefully not superstitious*. Archaeologists inspect a mummy, wrapped in a burial shroud adorned with brightly coloured hieroglyphic pictorials. Coffins and statues were found in three burial shafts at depths of 12m in the Saqqara necropolis. Picture: AFP Some people believe in the so-called curse of the pharaohs, by which anyone who disturbs mummified remains of an Ancient Egyptian person will be cursed* with bad luck, illness or even death. It’s said that the curse doesn’t differentiate* between archaeologists and thieves.

People who believe in the curse often use the example of the people who died after opening the tomb of King Tutankhamun.

Curses are a type of superstition or belief in supernatural* powers, rather than something supported by science. 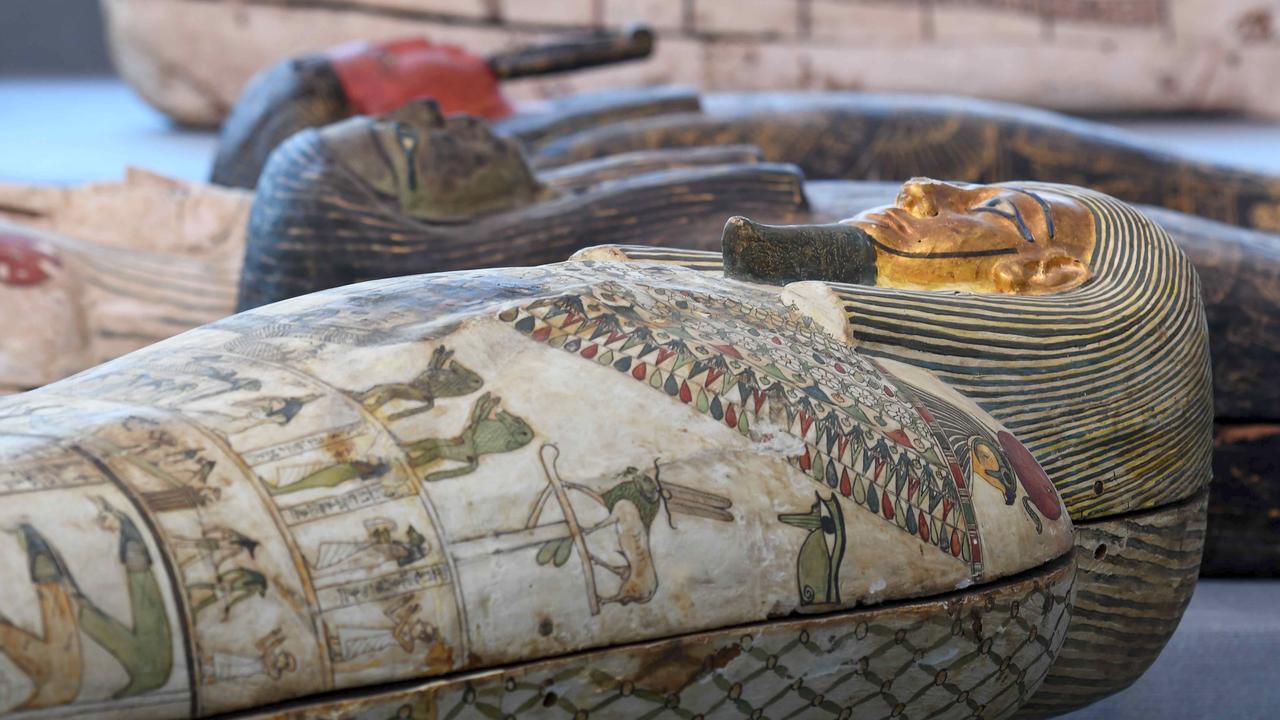 Wooden coffins at the Saqqara necropolis on November 14, 2020. Picture: AFP

ANCIENT EGYPT
The civilisation began about 5000 years ago when ancient humans began building villages along the River Nile.

It lasted for about 3000 years and saw the building of complex cities as well as the famous Great Pyramids.

Religion and a belief in and preparation for the afterlife were a huge part of Ancient Egyptian culture. Important people’s corpses were mummified to preserve their bodies for the afterlife. They worshipped more than 2000 gods.

Pharaohs built huge tombs to be buried in, some of which were pyramids – at the time among the largest buildings in the world

The Ancient Egyptian empire failed due to wars with other empires and a 100-year period of drought and mass starvation.

CLASSROOM ACTIVITIES
1. Design a Coffin
Look at all the beautiful coffin designs for these Egyptian mummies. The coffins we traditionally bury people in look very boring compared to this! They’re most often a simple timber box, perhaps with shiny metal handles.

Design a coffin that is more creative and something you might like a loved one to be buried in. Look at the pictures of the Egyptian mummy coffins to get some inspiration.

2. Extension
If the superstition about whoever disturbs the remains of an Egyptian mummified person will be cursed with bad luck were to come true, what might happen to some of these people?

Do you believe in superstitions?

Do you do things differently in case a superstition might come true?

An adjective is a describing word. They are often found describing a noun. To start with look at the words before the nouns.

HAVE YOUR SAY: What ancient artefact would you like to find?
No one-word answers. Use full sentences to explain your thinking. No comments will be published until approved by editors.