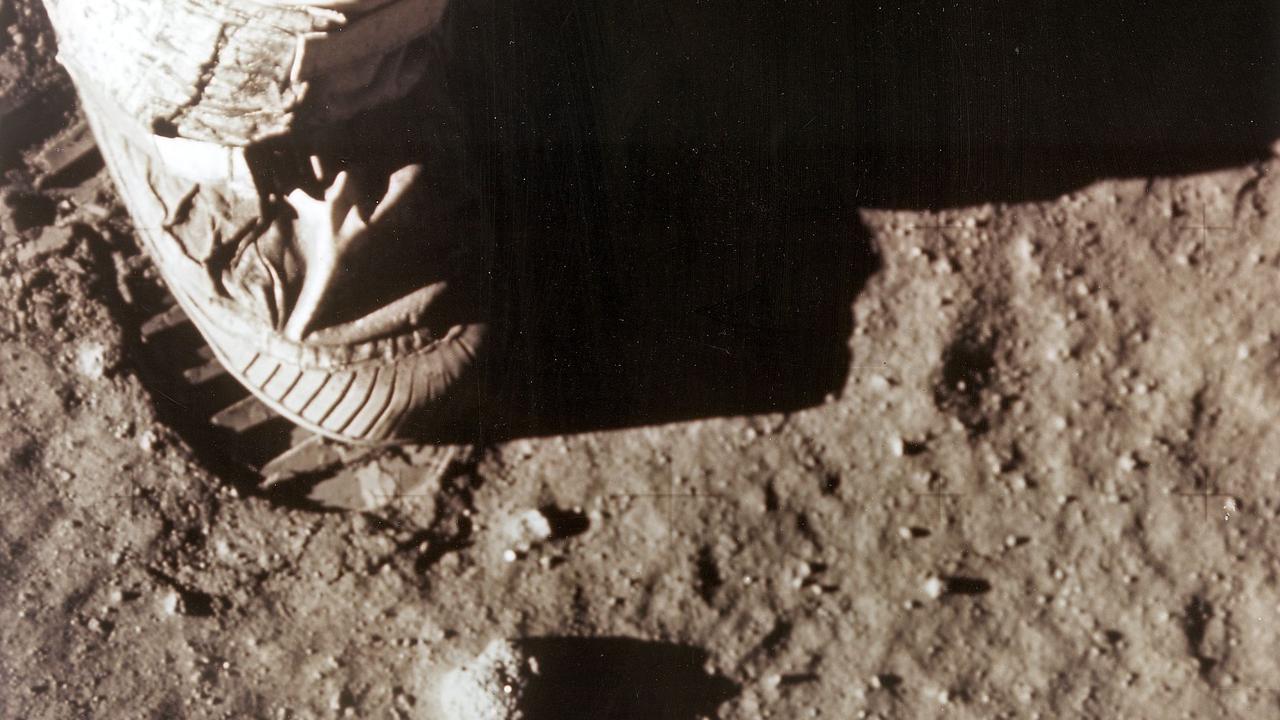 Apollo 11 commander Neil Armstrong's right foot leaves a footprint in the lunar soil July 20, 1969. Original videotape recordings from Neil Armstrong’s camera as he walked on the moon are about to be sold. Picture: AFP/NASA

A man who bought a truckload of unwanted film for next to nothing while he was doing work experience at NASA in the 1970s discovered he owned the only surviving original recording of the moon landing.

He became a millionaire on July 20, the 50th anniversary of the moon landing, when Sotheby’s auction company sold the tapes for $2.58 million, more than 8000 times the amount he paid for them.

In the years after the July 20, 1969 moon landing, NASA recorded over its tapes or sold them, said Gary George, who was a college student when he bought more than 100 reels of NASA videotape* for about $310 at a government auction in 1976.

“I had no idea there was anything of value on them,” said Mr George, a 65-year-old retired engineer from Las Vegas, US.

“I was selling them to TV stations just to record over.” Three video tapes bought by then intern Gary George from NASA in 1976 and containing the only surviving original recording of the moon landing. Picture: Sotheby’s/Reuters

But three of the tapes turned out to be invaluable*. One of them captures the images of the first steps on the moon by astronaut Neil Armstrong, along with his famous words, “That’s one small step for man, one giant leap for mankind.”

The recordings also show astronaut Buzz Aldrin bounding around in minimal lunar gravity, as well as their call with then US President Richard Nixon, the men planting the American flag on the lunar surface, collecting soil and rock samples and much more, said Sotheby’s spokeswoman Hallie Freer.

The sound and images on the tapes were transmitted* by a camera used by Armstrong that remains on the moon’s surface to this day. Astronaut Neil Armstrong smiling at the camera aboard the lunar module “Eagle” on July 21, 1969 after spending more than 2 hours on the lunar surface. Picture: AFP/NASA

The tapes made $2.58 million when they were sold in New York on July 20 to an unknown buyer. Before the sale, Ms Freer would not say how much Mr George or Sotheby’s would each get from the sale.

Collectors pay huge amounts for space exploration artefacts*. Sotheby’s in 2017 sold a zippered bag stamped with the words “Lunar Sample Return” laced with moon dust, which was used by Armstrong on that 1969 mission, for $2.6 million. After buying the tapes, Mr George sold about eight reels to television stations for about $70 each. It was not until he was packing his station wagon with tapes to donate to a church that his father spotted the three tapes labelled “Apollo 11 EVA.” EVA was the acronym NASA used for the moon landing, short for extra vehicular activity.

“He was really into the space program and he said, ‘I think I’d hang onto those. They might be valuable someday,’” Mr George recalled. “So, for that very reason, I pulled them out and hauled them around the country for the next 43 years. That’s how come they survived.” The monitor at the CSIRO radio observatory at Parkes, NSW, which showed the first vision of Neil Armstrong’s historic moon walk after it was transmitted back to Earth. Picture: David Cooke

NASA admitted in 2006 that no one could find the original video recordings of the historic moon landing.

In 2008, Mr George was holidaying with a NASA friend who told him he’d been given the job of locating the lost videotapes.

“He said, ‘It seems we’ve lost our original tapes of the Apollo 11 EVA,’” Mr George said.

“Quite frankly, I was sitting at the table drinking a beer and I said, ‘Well damn, I have those,’” he recalled.

Mr George did not have the proper equipment to view the tapes, and still did not know exactly what was on them but said he later visited a video studio in California where he watched them for the first time.

For more on the 50th anniversary of the moon landing visit kidsnews.com.au/education-kits

1. Write a conversation
Mr George did not know the value of these tapes that he had held onto for many years.

Imagine you are a representative from Sotheby’s auction company conducting the first meeting with Mr George, who wanted to sell the tapes.

Write your conversation with Mr George. He will need to explain what is on the tapes and where he got them. You will need to predict how much these tapes might gain at auction and why they are worth so much money.

2. Extension
Have you bought something at a garage sale that you believe will be valuable in the future? Or do you have something at home that you hope might increase in value in years to come?

What is it? Describe your item and explain why you think it might be more valuable in the future. Draw a picture of your item.

HAVE YOUR SAY: If NASA offered you a trip to the moon or lots of money for the tapes, which would you choose? If you chose money, what would you spend it on?
No one-word answers. Use full sentences to explain your thinking. No comments will be published until approved by editors.