The mystery of Easter Island’s hundreds of huge, ancient statues has baffled the world for centuries, but new research brings us “tantalisingly* close” to understand how and why the statues were created.

The 887 statues — called moai — are dotted around the remote* Pacific island of Easter Island, known to locals as Rapa Nui. The island is a UNESCO World Heritage Site.

Most statues are found along the coast and were built between the years 1200 and 1600. Each is carved from a single piece of stone and some are up to 9m high. The largest weighs 74,000kg.

No one knows how and why they were made and how they were moved into place.

Researchers from New York’s Binghamton University have suggested that the islanders used the statues to signal the location of freshwater.

Carl Lipo, an anthropologist, led a team studying how the local people were able to survive with such limited access to drinking water. Anthropologists study humans, human behaviour and societies* now and in the past.

Dr Lipo wondered how, with no springs or streams and low rainfall, did the Easter Island society of about 15,000-20,000 people survive.

According to the research, published in the Hydrogeology Journal (a research magazine about groundwater), they were forced to rely on brackish groundwater — which is saltier than freshwater but not as salty as sea water — found in coastal areas, for their source of drinking water.

“Although coastal groundwater sources are of poor quality, they were apparently sufficient* to support the population and allow them to build the magnificent statues for which Easter Island is famous,” the study states.

“Now that we know more about the location of freshwater, however, the location of these monuments and other features makes tremendous* sense: they are positioned where freshwater is immediately available,” Dr Lipo said.

He explained the underground water flows downhill and comes to the surface right where rock meets the ocean.

“When tides are low, this results in the flow of freshwater directly into the sea.”

Water is easily collected at these points. 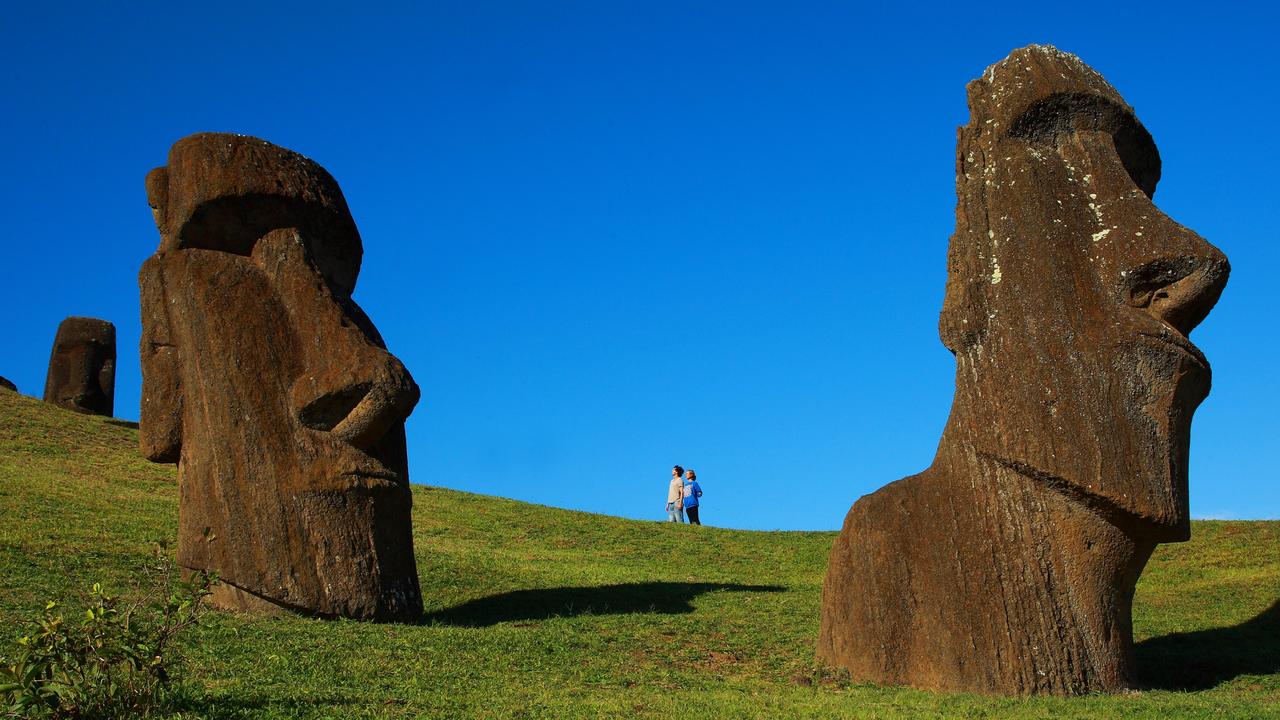 Moai on Easter Island. You can get an idea of how big they are by looking at the two people in the background. Picture: supplied

The researchers now aim to explore the link between the location of the moai and the accessibility to drinking water, which remains a key piece of the puzzle when figuring out how they built and moved the statues.

Rapa Nui was almost deserted after Europeans visited in the 1800s, many of the locals becoming sick and dying of diseases.

Early accounts of the island described the people appearing to “drink seawater”.

“This information ultimately sheds light on the conditions that drove and enabled* these communities to work together to achieve their feats* of engineering,” Dr Lipo said.

“By gaining knowledge about community-scale behaviour, we can gain insights into the general conditions necessary for group-level co-operation — whether in the past or in contemporary* society.”

He said they are now “tantalisingly close” to putting together all pieces of the island’s puzzle. Moai statues in Easter Island, which is the most remote inhabited island in the world and belongs to Chile. Picture: iStock

It belongs to Chile.

Almost 6000 people live on Easter Island. About half the locals are descended from the 110 original inhabitants who survived after European contact.

It is one of the most isolated islands in the world. The closest island with people living on it is Pitcairn Island, more than 2000km away. These are important places, such as buildings, monuments, ancient ruins, forests, deserts, lakes and islands that UNESCO believes we should protect.

UNESCO stands for United Nations Educational, Scientific and Cultural Organization. It is an international committee made up of 195 countries.

There are 1092 World Heritage sites around the world, including Easter Island.

groundwater: water from the ground, rather than seawater or rainwater

enabled: made it able to happen

1. Does anyone know how these heavy sculptures were moved into place?

2. How heavy is the largest sculpture?

3. What does an anthropologist do?

Complete a flowchart like the blank example below detailing the key points from the article about how they think the inhabitants of Easter Island survived without fresh drinking water. Extension: Do you know why people can’t survive on seawater? Research this topic to find the answer.

HAVE YOUR SAY: How do you think the islanders moved the statues into place? Use full sentences to explain your thinking. No one-word answers.