The fossilised clam or mollusc from the Cretaceous period. Picture: supplied

An ancient clam has shown scientists that a day on Earth once lasted only 23-and-a-half hours.

The fossilised mollusc* was alive 70 million years ago during the late Cretaceous period.

Around this time, the last days of the dinosaurs, Earth rotated faster: 372 rotations in the time Earth currently does 365 rotations.

Earth’s modern 24-hour day is the time it takes for the Earth to rotate once. Back in the time of the mollusc, each day would have been half an hour shorter than it is now. Adjusting the clock in the centre of Minsk, the capital of Belarus. When the ancient clam was alive, each day would have been 23-and-a-half hours, half an hour shorter than it is now.

They looked at the growth rings under a microscope and learned about what was happening in the environment at the time, even down to the level of season to season and hour to hour.

“We have about four to five datapoints per day, and this is something that you almost never get in geological* history. We can basically look at a day 70 million years ago. It’s pretty amazing,” said study lead author Niels de Winter, according to The Times.

The study looked at a single mollusc that lived for more than nine years in shallow seawater in what is now Oman, in the Middle East.

Using lasers, the researchers counted the daily growth rings, which ­allowed them to know the number of days in a year and calculate the length of a day in the late Cretaceous period.

Days on Earth are getting gradually longer because friction* from ocean tides is slowing Earth’s rotation. Tides are caused by the pull of the moon’s gravity. Earth seen from the moon, taken in July 1969 from the Apollo 11 spacecraft. Tides on Earth are caused by the pull of the moon’s gravity as it rotates around Earth. Picture: AFP/NASA

HISTORY OF THE MOON
Studying the mollusc could help scientists understand the history of the moon.

Scientists know the moon probably formed 4.5 billion years ago, which means the moon must have changed the rate at which it is moving away over time.

Understanding how the length of an Earth day has changed over the years will help us understand how the moon and Earth have interacted over time.

Most scientists agree that the moon likely formed when there was a collision between Earth and a smaller planet about the size of Mars.

The moon probably formed from the collision debris.

The results of the research were published in the journal Paleoceanography and Paleoclimatology. Satellites, planes and comets transit across the night sky under stars that appear to rotate (but really it’s the Earth rotating, not the stars) above Corfe Castle, UK. Picture: Dan Kitwood/Getty Images

The moon, its history, and impact on our lives

CLASSROOM ACTIVITIES
1. Cause and Effect
In your own words after reading the Kids News article, explain the cause and effect of the four scenarios listed below: 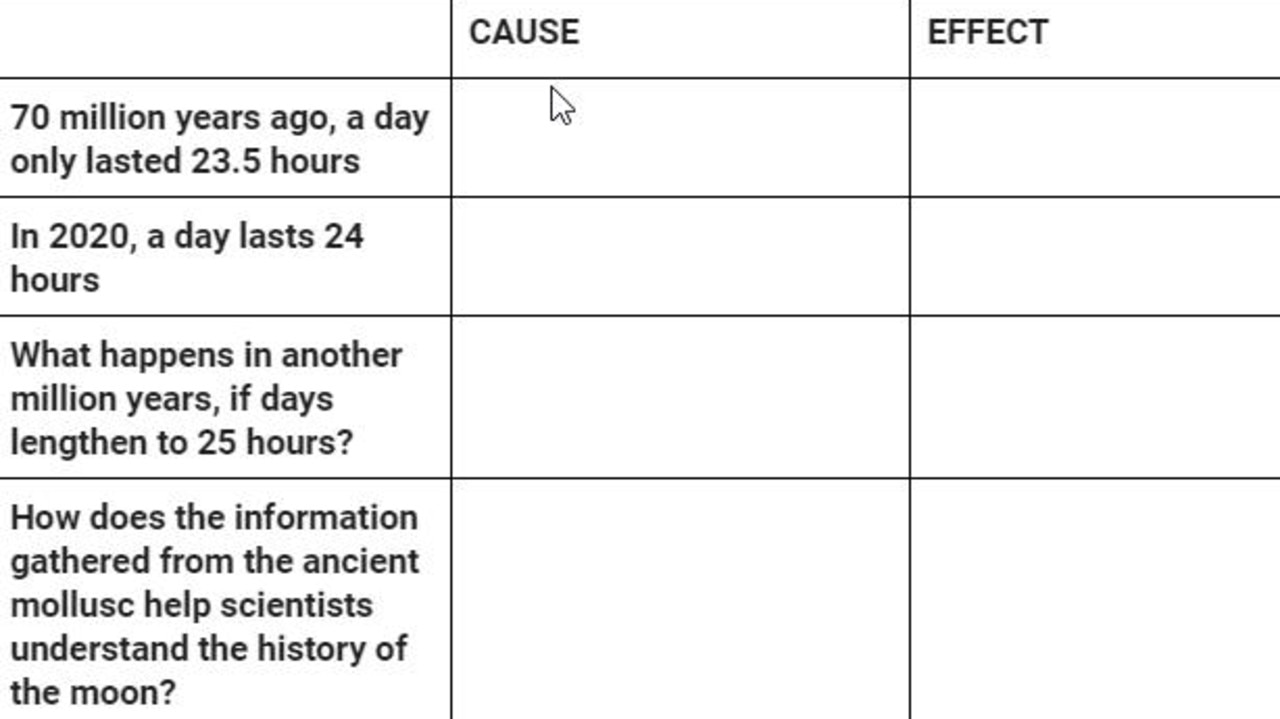 Complete the cause and effect chart

Answers are below the comments. Don’t look until you’ve had a go!

VCOP ACTIVITY
A Recorded Moment in Time
Scientists have been examining the rings the mollusc grew each day as a record of that moment in time.

You have just started working with the scientists and as a joke suggest that they put the mollusc on an old record player to see whether he plays.

The scientists stare at you, before yelling “Genius” and pat you on the back.

You then lay the mollusc on the record player, line the tip up on a growth ring and start playing. No one can believe what they are actually hearing!

What happens when they play the mollusc’s growth ring?

Don’t know what a record player is?

Long before we could play music on our phones there were records called vinyls. They were played on a machine where a needle was placed on one of the grooves of the record and the recorded sound was played back. If you don’t know what we are talking about, ask your teacher to look up record players and show you how they work.

HAVE YOUR SAY: What would you like to go back in time to learn about?
No one-word answers. Use full sentences to explain your thinking. No comments will be published until approved by editors.