The original, handwritten version of Banjo Paterson’s “Waltzing Matilda”could soon be on its way back to where it was written.

Queensland Premier Annastacia Palaszczuk wrote to Banjo Paterson’s oldest living relative asking to discuss permanently* displaying the historic document in the outback town of Winton, where the song was written 123 years ago.

Almost no one knew the manuscript* existed until two weeks ago, at the official opening of the new Waltzing Matilda Centre. 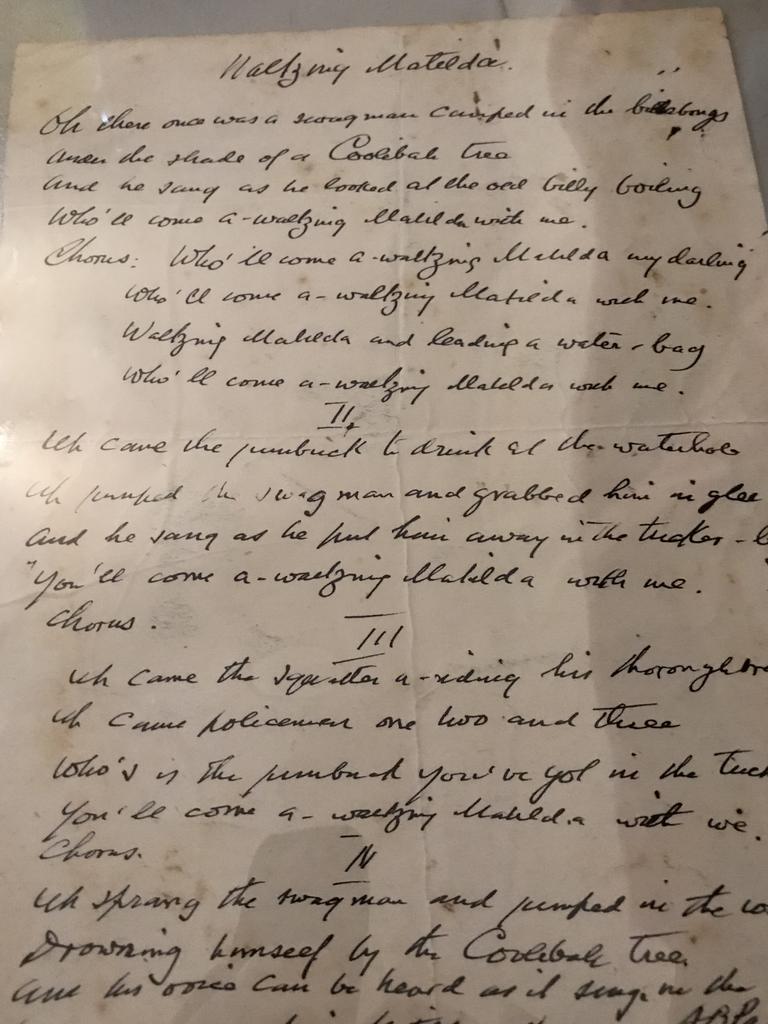 “I couldn’t believe what I was holding,” the Premier said.

“More than that, I couldn’t believe it’s not on display.”

The Government hopes Mr Campbell, who lives in country New South Wales, will agree to the document* taking pride of place in the new $23 million Waltzing Matilda Centre, the first museum in the world dedicated* to a song.

The song, written at the Dagworth Station sheep and cattle property in January 1895, has become Australia’s unofficial national anthem, sung from battlefields to sports arenas around the world, including before the AFL Grand Final each year. Winton Shire Mayor Gavin Baskett said it would be ‘’unbelievable’’ to have the manuscript in the town.

“This is the natural home for it.

“The whole culture* of the town has been built up around ‘Waltzing Matilda’,” Mr Baskett said.

“There were rumours (that the manuscript) still existed but nothing official. So it took us all a bit by surprise — a champion surprise.”

The original centre — built in 1998 after celebrations to mark the song’s centenary* — burnt down three years ago, which was very upsetting for the community.

The tiny town of Winton — which has a population of only 875 — was overflowing with 8000 visitors at the festival to open the museum.

“The atmosphere* in town is still buzzing,” said the mayor.

The centre is expected to become a major tourist attraction for outback visitors.

Mr Baskett said they had many offers of memorabilia*, including a collection of 1500 different recordings of the song from a barrel organ*, to records*, cassettes*, CDs and digital downloads. Online news coverage of the opening was seen by an audience of more than 70 million people and generated* 4.5 million social-media views — from as far away as Sweden.

“We are over the moon with the publicity we’ve got,” the mayor said.

300-year-old violin is worth millions

CLASSROOM ACTIVITIES
1. Next up … “Waltzing Matilda”
“Waltzing Matilda” is an iconic Australian song. However, it may not be well known to people from other countries. Using facts from the article write an introduction for the song as if it was to be the next song played on the radio. Include details of when, where and by whom, it was written. What it is about and its significance in Australian culture.

Extension: Should A.B. “Banjo” Paterson’s great grandson, Alistair Campbell, donate the prized manuscript to the museum? Make a list of reasons FOR and AGAINST parting with the manuscript so that it can go on display.

After thinking through the reasons, imagine you were Alistair Campbell. What would you do? Write a letter responding to Annastacia Palaszczuk’s (the Queensland Premier) request to display the manuscript in the museum. Include why you have come to your decision. If you decided to allow it to be displayed, how would you like the museum to take care of it and protect it from damage? Are any conditions on the loan/purchase of the manuscript?

2. More of Banjo Paterson’s poetry.
Banjo Paterson has written many poems and ballads about Australian life. Choose another piece (other than “Waltzing Matilda”) of his work. Some suggestions are: “The Man from Ironbark”, “Mulga Bill’s Bicycle”, “Clancy of the Overflow”, “The Man from Snowy River”, “A Bush Christening” but you may find another that interests you. Read the poem carefully. Answer the following questions about the work:

Extension: While reading the poem, you will have created a visual image of what it is about. Using whichever art materials you have available (for example, college, pencils/markers, pastels or paint), create a picture of the visual image in your head. Write a title for your artwork. It could be the title of the poem you have read or it may be a line from the poem that stands out to you.

Highlight them in yellow and then make a list of them all down your page. Now see if you and your partner can come up with a synonym for the chosen verb. Make sure it still makes sense in the context it was taken from.