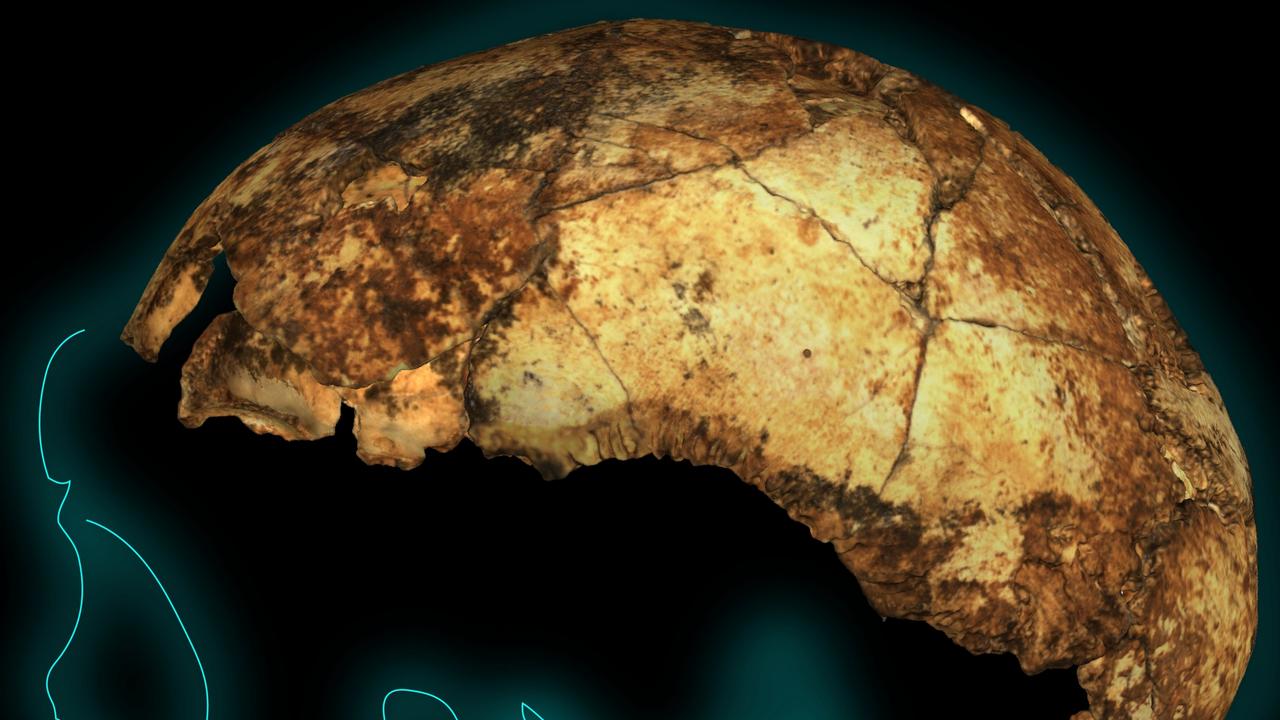 The two-million-year-old fossil*, named DMH 134, was carefully rebuilt from more than 150 pieces of bone and is believed to be about 200,000 years older than any other Homo erectus fossils found.

La Trobe University Professor Andy Herries, who lead the international team of palaeontologists*, said the fossil could belong to the group that every single person in the world relates back to.

The skull specimen*, believed to belong to a toddler aged just two or three, was discovered in South Africa. Prof Herries said while this ancient species had a smaller brain than humans of today, it walked on two feet and was the first to leave Africa to settle large parts of the world, right through to Asia.

Prof Herries said despite the young age of the toddler at death, the brain was only slightly smaller than other examples of adult Homo erectus — the first of our ancestors* to be almost human-like in body and behaviour.

“Homo erectus is considered the direct ancestor of all later species of humans including us, as well as Neanderthals* and Denisovans* and is the first human ancestor to really look much more humanlike, with bigger brains, a modern way of walking and running, and the development around 1.8 million years ago of more complex stone tools,” Prof Herries said.

Rewriting the history of modern humans

Prof Herries said Homo erectus lived at the same time as other types of humans in South Africa — Paranthropus and Australopithecus.

“This suggests that one of these other human species, Australopithecus sediba, may not have been the direct ancestor of Homo erectus, or us, as previously hypothesised*.

“As the last surviving human species, we should not think we are immune* to the same fate as Australopithecus, who likely became extinct as a result of the changing climate two million years ago.”

Homo erectus disappeared from the African landscape 1 million years ago and across much of Asia 500,000 years ago, but a population lived up to 110,000 years ago in Indonesia.

Homo sapiens — Latin for ‘wise man’ and the species of modern-day humans — are believed to have first appeared 300,000 years ago in Africa.

The research is published in the journal Science.

CLASSROOM ACTIVITIES
1. Simplify it
This news article is quite complex! See if you can show your understanding by simplifying down to it’s most essential elements to turn it into a short non-fiction book that would be suitable to read to a 5-year-old. Include some illustrations in your book.

2. Extension
Draw an evolution timeline, including any information you can from the article. Then do some more research to see what else you can add to your timeline.

VCOP ACTIVITY
Verb adventures
With a partner see if you can identify all the doing verbs/doing words in this text. Highlight them in yellow then make a list of them down your page. Now see if you and your partner can come up with a synonym for the chosen verb. Make sure it still makes sense in the context it was taken from.
Try to replace some of the original verbs with your synonyms and discuss if any are better and why.

HAVE YOUR SAY: What type of fossil bone would you like to find?
No one-word answers. Use full sentences when explaining your thinking. No comments will show until approved by editors.