An illustration of what Titanic II could look like cruising at sea. Picture: AP

Exactly 110 years after the Titanic hit an iceberg and sank, a replica will set off to finally complete its maiden* voyage.

Titanic II is due to set sail in 2022, according to the project’s founder, Australian businessman Clive Palmer.

Mr Palmer’s company Blue Star Line has been working on the $700 million Titanic II project since 2012. UK news service BBC reported it was originally due to be complete in 2016 but the project was paused until recently over arguments about money between companies involved.

Titanic II is being built in a shipyard in China, rather than the Belfast shipyard in Northern Ireland, UK, where the original, “unsinkable” Titanic was built. Titanic while it was being built in Belfast, Northern Ireland, UK, around 1911. Picture: Getty Images

Aside from modern navigation* and safety technology and extra lifeboats, almost everything else about the replica will be the same as the original. A drawing of what the inside of the replica ship will look like. Picture: AP

Titanic II will copy the cabin layout of the original and will carry almost exactly the same number of people on board — 2400 passengers and 900 crew. The replica ship will even have a swimming pool the same as the original. This is a drawing showing what Titanic II will look like. Picture: AP

The plan is for it to start its first journey in Dubai, in the United Arab Emirates, then take the same North Atlantic route from Southampton, England to New York, US.

After the two-week maiden voyage, it will travel other routes.

“But she will also circumnavigate* the globe, inspiring and enchanting* people while attracting unrivalled* attention, intrigue* and mystery in every port she visits.” 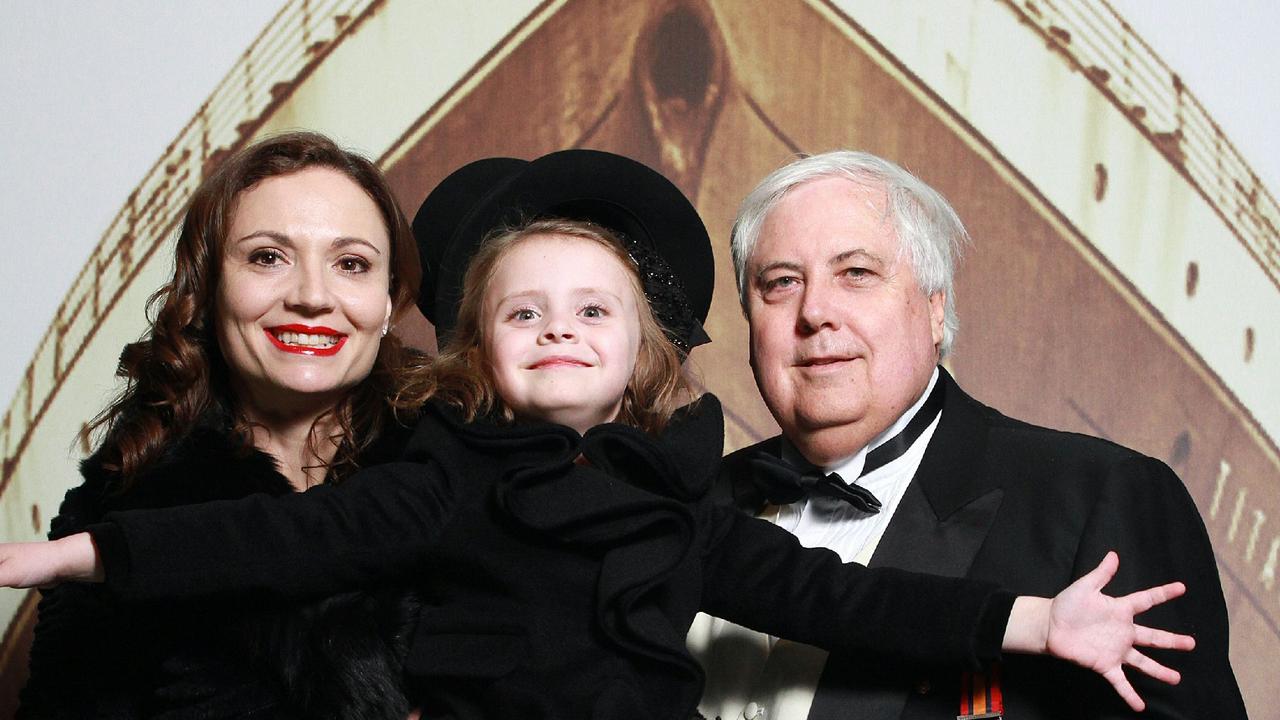 Clive and Anna Palmer with daughter Mary in 2012, when Mr Palmer began the project.

According to Blue Star Line, Titanic II will have the same passenger categories as the original ship — first, second and third class.

It will also be the same length, and will have dining rooms and restaurants the same as the original.

Ticket prices have not been released.

This video, from a Titanic exhibition in China, shows what the original ship looked like

Titanic, the largest ship afloat at the time, was considered unsinkable.

Disaster struck days into its maiden voyage to New York on April 15, 1912.

The UK ship hit an iceberg south of Newfoundland, Canada.

It sank hours later, killing more than 1500 people, including the ship’s architect, and its captain Edward Smith.

Only 706 passengers and crew survived. A Turkish bath on board the replica ship will look like this. Turkish baths were very fashionable for rich people around 1912, much like a day spa. Picture: AP

circumnavigate: go right around the Earth

unrivalled: nothing matches or beats it

1. Who is leading this project?

2. Where was the Titanic built? Where is the replica being built?

3. What improvements will the replica have?

4. What date did the original ship hit the iceberg?

5. Who was Titanic’s captain?

The maiden voyage for Titanic II is not until 2022. However, it is never too early to start creating interest in the idea of being able to travel in a replica of the magnificent ship that went down in tragic circumstances in 1912.

Create an advertisement in a travel magazine to encourage people to purchase a ticket on Titanic II. It could be for the maiden voyage or for another leg on the circumnavigation of the globe. Highlight why it would be an incredible experience and why it is unlikely to suffer the same fate as the original.

Extension: A lot of people have a fascination with all things related to the Titanic.

Create a board game that tests people’s knowledge of the Titanic and the fateful maiden voyage in 1912. You will find some facts in the above article, but you may have to do some further research to include more facts in your game.

The object of your game will be for people to use their knowledge of the Titanic to navigate their way to the ‘Finish’ point on the game.

You can use your imagination to design your game but here are some ideas to get you started.

You could design your game so that it follows the planned voyage of the Titanic.

Your game could be a maze that you need to select the correct answers to find your way to the end.

You might use cards that have questions related to the Titanic.

You could include icebergs to slow progress through the game.

HAVE YOUR SAY: Would you buy a ticket on the replica Titanic? Why or why not? Use full sentences to explain your thinking. No one-word answers.