‘Astonishing’ monument found next to Stonehenge A wide circle of pits surrounds Durrington Walls in Wiltshire, UK. Stonehenge is just off the top left of this diagram. Picture: University of Bradford via Reuters

Archaeologists* have discovered a major prehistoric* monument next to Stonehenge.

Twenty or more massive shafts*, each more than 10m in diameter* and 5m deep, form a circle more than 2km in diameter around the Durrington Walls henge, a circular, Neolithic* structure that was made of timber posts. A drawing of how Durrington Walls could have looked. The shafts are in a 2km-wide circle and this structure would have been at the exact centre. Picture: AP

Testing of the shafts suggest they were dug more than 4500 years ago, around the time Durrington Walls and Stonehenge were built.

The newly discovered structure is 3.2km northeast of Stonehenge in Wiltshire in the UK.

Stonehenge is one of the world’s best-known prehistoric sites, visited each year by thousands of tourists and people seeking spiritual* connections with the past.

We still don’t know exactly how or why Stonehenge was built. It is hoped that the new find could help us better understand people who lived at that time. Sheep graze beside the prehistoric monument at Stonehenge, UK, in April. A vast, 4500-year-old monument, thought to be one of the largest prehistoric structures found in the UK, has been discovered near Stonehenge. Picture: AFP

“As the place where the builders of Stonehenge lived and feasted, Durrington Walls is key to unlocking the story of the wider Stonehenge landscape,” said archaeologist Nick Snashall of the National Trust, the organisation that manages the Stonehenge site.

“This astonishing* discovery offers us new insights* into the lives and beliefs of our Neolithic ancestors,” he said.

The circle of pits is much larger than any comparable* prehistoric monument in the UK. The team of archaeologists, from several universities, has found 20 shafts, but estimate there may have been more than 30 originally.

It is thought the shafts served as a boundary to a sacred* area to do with the Durrington Walls henge.

The researchers made their find without the need for excavators. Instead, they used remote sensing technology and by taking soil samples.

The archaeologists said the precise* way the pits were positioned suggests that the early inhabitants* of this area used a counting system to measure — by stepping or pacing out a line — across long distances.

“The size of the shafts and circuit surrounding Durrington Walls is without precedent* in the UK,” said Vince Gaffney, a professor of archaeology at the University of Bradford and one of the lead researchers on the project.

He said the discovery showed “the capacity* and desire of Neolithic communities to record their cosmological* belief systems in ways, and at a scale, that we had never previously anticipated*.” 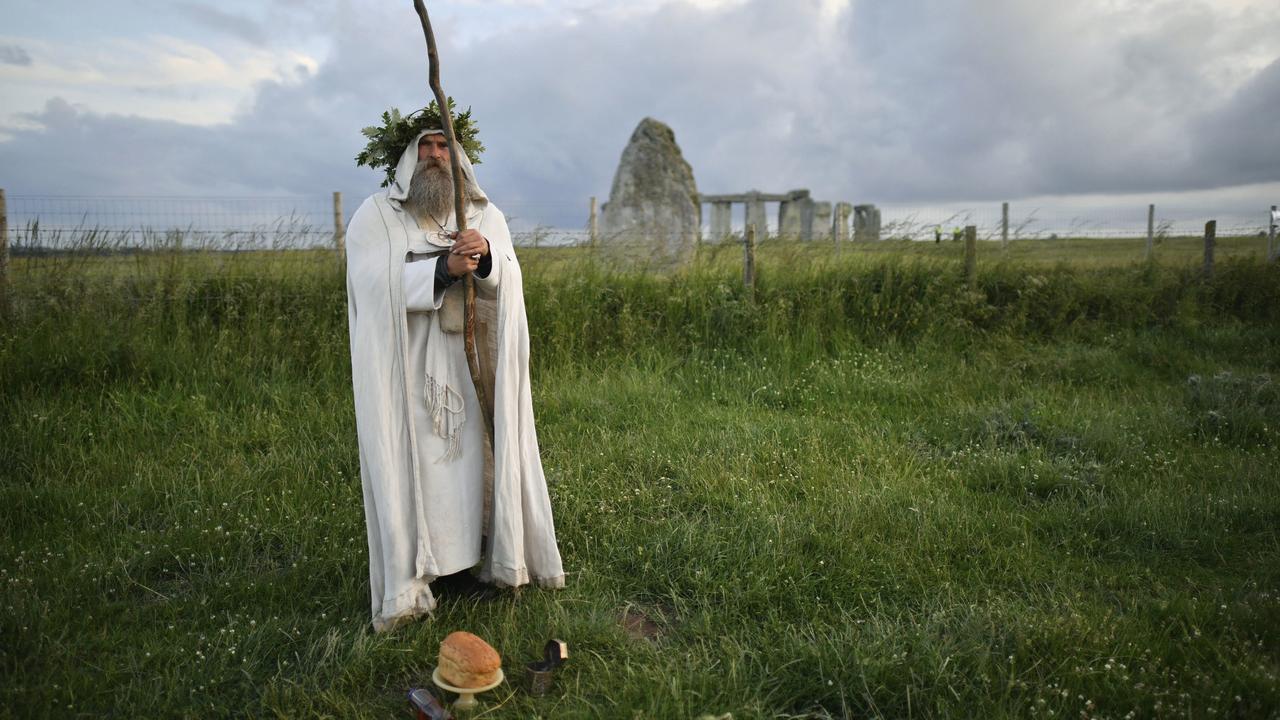 An Archdruid performs a ritual near Stonehenge to celebrate the Summer Solstice, the longest day of the year on June 21, 2020. The coronavirus pandemic prevented druids, pagans and partygoers from watching the sun rise at Stonehenge to mark the summer solstice as they usually do each year. Picture: PA via AP

CLASSROOM ACTIVITIES
1. Sacred Spaces
This new archaeological find near the famous Stonehenge monument adds further to the idea that these large monuments had something to do with performing ancient rituals or special ceremonies of significance at the time.

Work with a partner and list some modern-day sacred spaces used by different religions and cultures for rituals and ceremonies. 2. Extension
What do the finding and studying of these ancient sites add to our understanding of ancient life and civilisations?

Why is it important to continue to search and study these ancient places and monuments using new technology that doesn’t even require digging?

What questions do you have for these archaeologists?

HAVE YOUR SAY: What ancient thing would you like to study?
No one-word answers. Use full sentences to explain your thinking. No comments will be published until approved by editors.