A mummified crocodile found at Saqqara, Egypt's "City of the Dead". Picture: AFP

Archaeologists have found a treasure trove of ancient mummified animals at Egypt’s “City of the Dead”.

Among the haul were crocodiles, a mongoose, birds, cats, and Egypt’s first discovery of lion cub mummies.

There may be as many as five lion cubs among the mummies, but just two have been confirmed so far. Lion cubs and cats were among the animals found wrapped in cloth and preserved. Picture: AFP 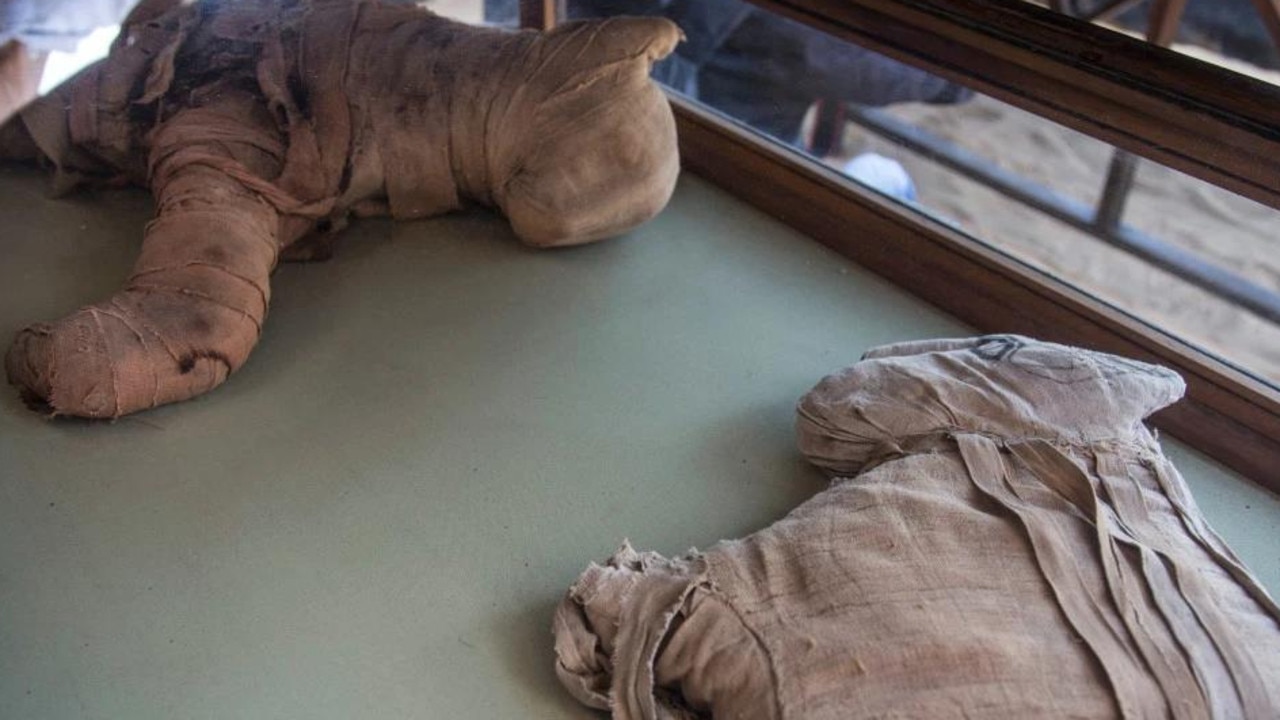 Mummified lion cubs were some of the rarest finds. Picture: AFP

“All of them are very interesting from the Egyptological* point of view to know better this area.” 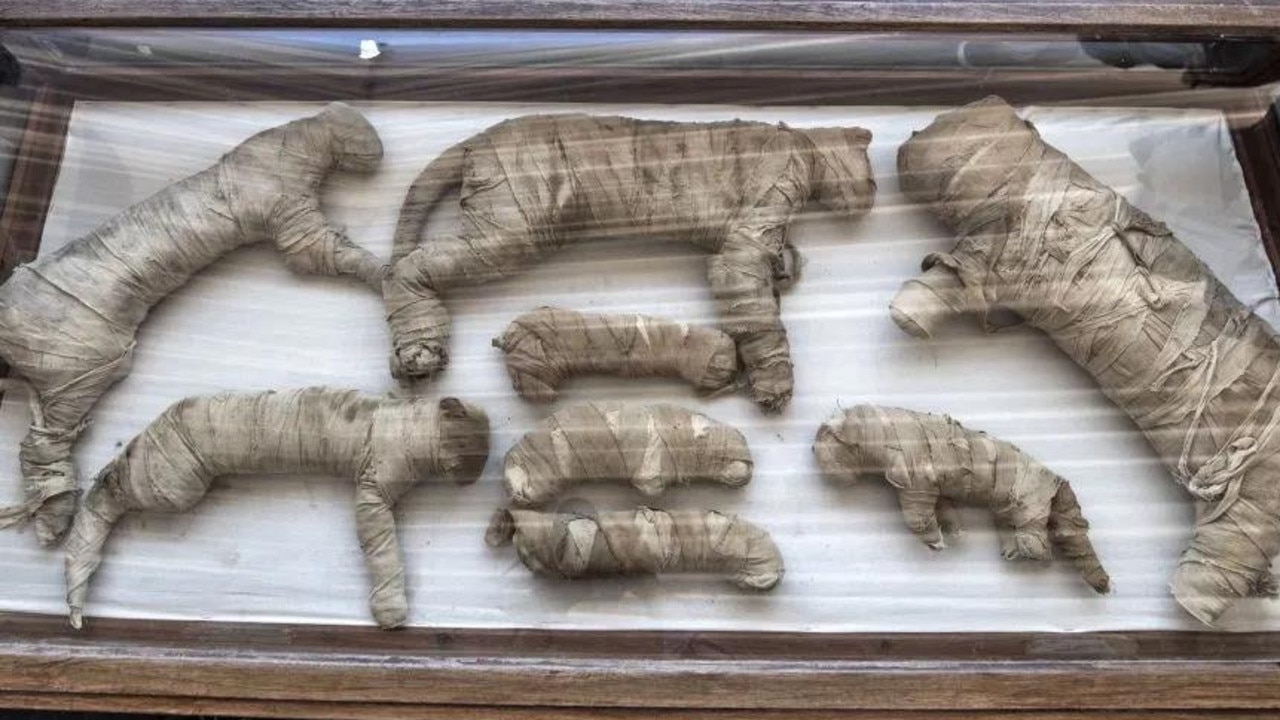 A number of mummified cats were found. Picture: AFP

The mummified animals are from the 26th Dynasty, which was around the 7th century BC.

They were found at the vast* Saqqara necropolis*, the main burial ground for the Ancient Egyptian capital of Memphis.

The site covers an area 7km long and 1.5km wide and is about 30km from the modern Egyptian capital Cairo.

Saqqara dates back to the Early Dynastic Period, which was between 3100BC and 2686BC and has a number of large pyramids – including the famous Step pyramid of Djoser.

It was an important burial complex for more than 3000 years, even after the Roman Empire took control of the region. 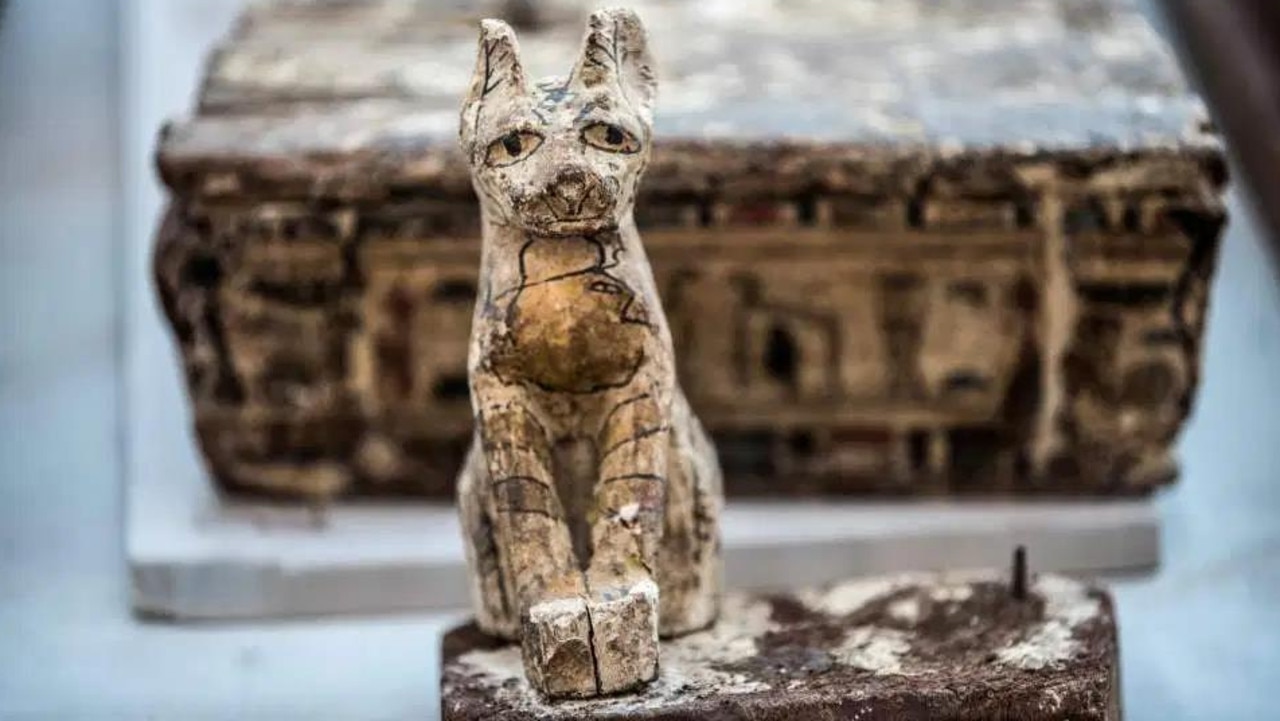 A small statue of a cat, which were very important in Ancient Egyptian culture. Picture: AFP

Archaeologists also found wooden and bronze cat statues representing the ancient goddess Bastet and a rare large stone scarab*, which Egypt’s Mostafa Waziri, secretary general of the Supreme Council of Antiquities, described as “the largest all over the world.”

They also displayed two mummies of ichneumon, or the Egyptian mongoose, wrapped in linen bandages and wooden and tin-glazed statuettes* of the goddess Sekhmet, represented as a woman with the head of a lioness. Experts say Sekhmet (1390-1252 BC) was a goddess of war and the destroyer of the enemies of the sun god Re. There were also strips of papyrus – a plant used by ancient people as paper – with drawings of the goddess Taweret shown as a hippopotamus with the tail of a crocodile.

Markings on the found objects show they date back to the Late Period (664-332 BC).

Khaled described the discovery as “a museum by itself”. Egyptian authorities launching the display of the finds, which they described as like a museum by itself. Picture: AFP A scarab statue found at the site. Picture: AFP

Ancient Egyptians mummified people who died because they believed their bodies went to another life, which they called the afterlife.

They mummified animals and buried them with people who died because they were beloved pets, to provide food in the afterlife, to act as offerings to a particular god, and because some of the animals were believed to be the physical bodies of gods.

CLASSROOM ACTIVITIES
1. Mummy mind map
Create a visual mind map that displays all the thoughts and information you’ve learnt about animal mummification from this Kids News story. A mind map is a visual overview of information that uses words, colour and images and connects information together like branches on a tree.

As your task is to display information on ‘animal mummification’, this should be your main heading. Have pictures and words coming off this heading displaying all the facts you’ve learnt and why the ancient Egyptians mummified animals.

2. Extension
If you had the option to mummify something after it passed away, what would you like to mummify or have buried with yourself or a loved one? Explain with words and pictures.

HAVE YOUR SAY: What would you like to have mummified with your mummified body if you were an Ancient Egyptian?
No one-word answers. Use full sentences to explain your thinking. No comments will be published until approved by editors.