Archaeologists* have found a 2200-year-old shipwreck buried at the bottom of the Mediterranean Sea.

The wreck of a military vessel was discovered underneath the ancient city of Heracleion (also known as Thonis), which fell into the sea after it was destroyed by earthquakes in the second century BC.

Along with the remains of a funerary* area, the 25m-long shipwreck was noted as being a common boat for navigating the Nile River.

“(The ship sank) as a result of the collapse of the temple and huge blocks falling on it during the second century BC, due to a devastating earthquake,” a statement from the Egyptian Ministry of Tourism and Antiquities said.

“The fall of these stone blocks contributed to keeping the ship down the deep canal now filled with temple debris*.” 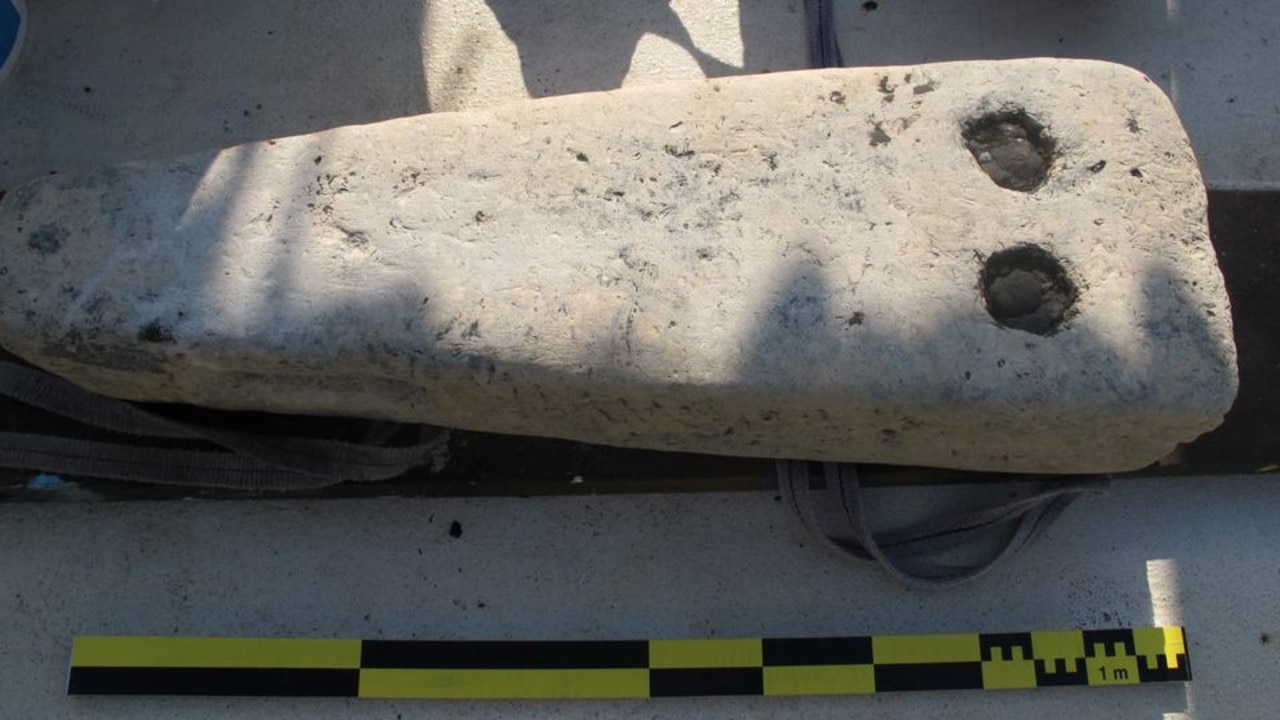 Parts of the 2200-year-old shipwreck discovered in Egypt. Picture: Egypt Ministry of Tourism and Antiquities.

The wreck was found by archaeologists under 5m of clay and debris along with a burial site which was covered in a pile of rocks.

It was discovered using a type of sonar* by an Egyptian-French mission, led by the European Institute for Underwater Archaeology (IEASM).

“This discovery beautifully illustrates the presence of the Greek merchants* who lived in that city,” the Ministry told Reuters.

“They built their own sanctuaries* close to the huge temple of Amun. Those were destroyed simultaneously and their remains are found mixed with those of the Egyptian temple.”

The city of Heracleion, which is where Cleopatra was inaugurated*, was said to be one of the most important trade centres in the Mediterranean before it disappeared into what is now the Bay of Aboukir. Fragments recovered from the site of the 2200-year-old shipwreck in Egypt. Picture: Egypt Ministry of Tourism and Antiquities

Heracleion, which sat off Egypt’s north coast, slumped into the sea some 2200 years ago and was lost for thousands of years until divers stumbled upon its remains in 2000.

In 2019, a mysterious temple was discovered among the ruins of an ancient sunken city described as the “Egyptian Atlantis”.

Studies of its sprawling ruins have been ongoing ever since, though we still don’t know much about the once-great port town.

CLASSROOM ACTIVITIES
1. Make a List
List all of the things that you think the shipwreck can help us learn about life in Ancient Egypt.

2. Extension
‘Studying old ruins is a waste of time and money.’

Do you agree or disagree with this statement? Write paragraphs explaining your point of view on this.