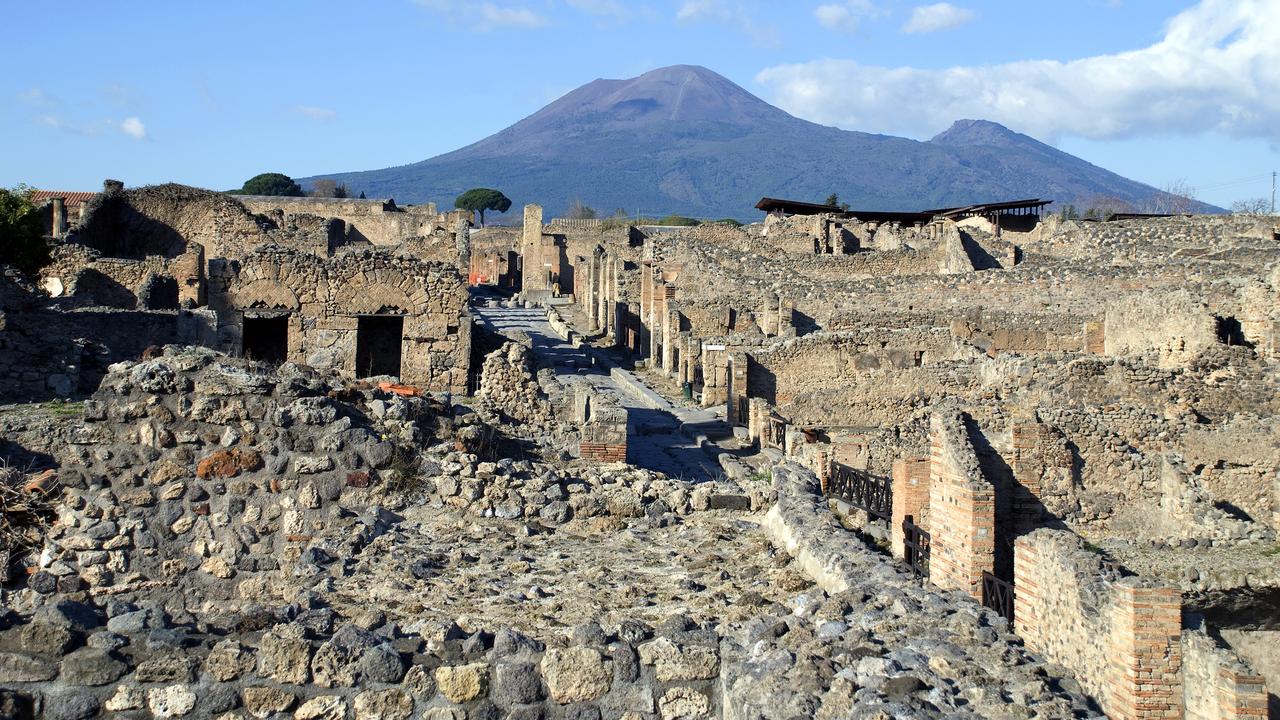 Pompeii, Italy, with Mount Vesuvius in the background. Picture: iStock

On April 1, 1748, a Spanish engineer and his team rediscovered the lost city of Pompeii, changing forever the way the world thought about history and archaeology*.

The city had been buried by millions of tonnes of volcanic ash when Mt Vesuvius erupted in 79AD.

It is now the longest continually excavated archaeological site in the world and excavations gradually reveal a complex and modern city, frozen in time.

Here’s some of what’s known about this fascinating time capsule of city life. WHAT IS POMPEII?
Two thousand years ago, Pompeii was a rich city on the Gulf of Naples, in what is now southern Italy.

Like other cities of the ancient Roman Empire, it was very advanced, with complex plumbing systems to efficiently supply water and remove waste, an amphitheatre* for public performances, a gymnasium* and a port for fishing boats and trading ships. It had a population of perhaps 10,000 to 20,000. The gladiators’ gymnasium for training. Gladiators fought other gladiators and animals for the entertainment of an audience. Picture: iStock 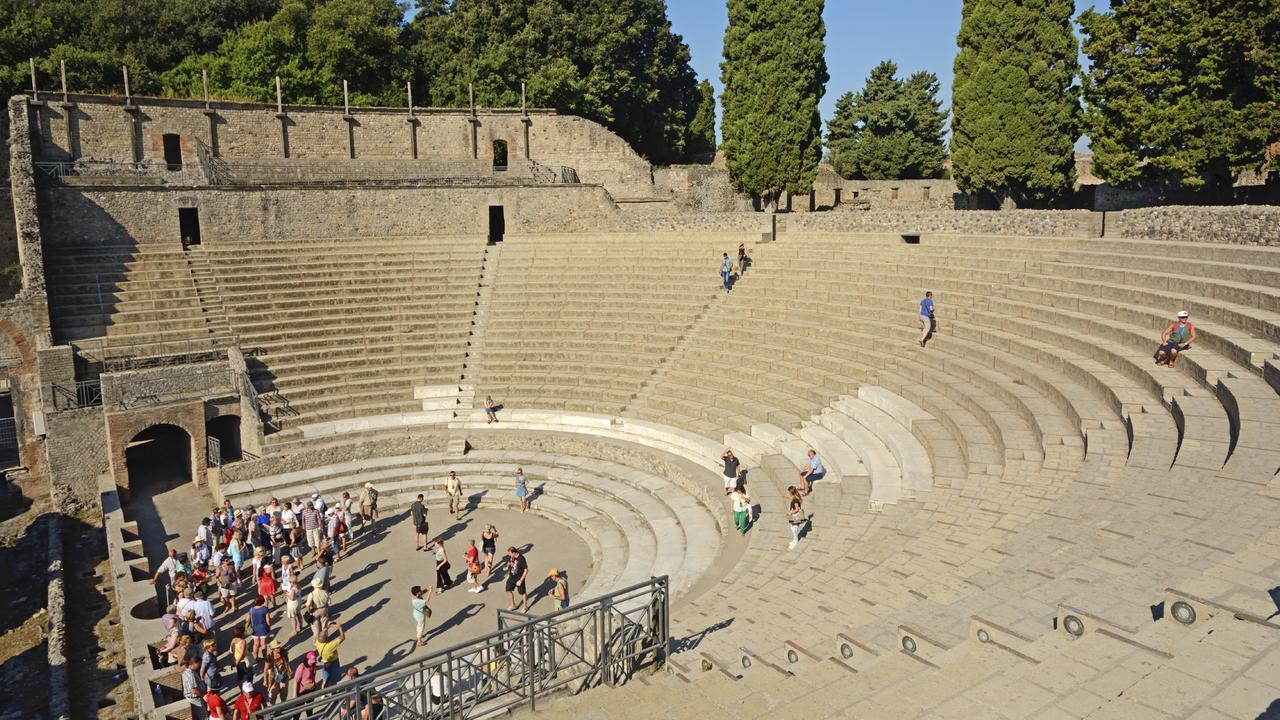 On August 4 in the year 79AD, nearby Mt Vesuvius erupted in one of the most violent volcanic eruptions in history. It is believed about 2000 people died and the rest of the population fled.

Today, Pompeii is a UNESCO World Heritage Site and one of Italy’s most popular tourist attractions with around 2.5 million visitors a year.

WHAT IS MT VESUVIUS?
This is mainland Europe’s only active volcano. Its peak is 1281m above sea level.

It was formed when the African and Eurasian tectonic plates* collided and the edge of the Eurasian Plate slid over the African Plate.

Vesuvius is a type of volcano called a stratovolcano or composite volcano, which means its mountain shape has built up over time as lava and other material was spewed in layers. Mt Fuji in Japan is another example of a stratovolcano. Mt Vesuvius towers over the ruins of Pompeii, Italy.

Its most famous eruption was August 4, 79AD, when it flung tens of thousands of cubic metres of stone, ash and volcanic gases many kilometres into the sky every second.

It completely buried the cities of Pompeii and Herculaneum in volcanic waste and turned people to ash where they stood.

There have been eight big eruptions in the past 17,000 years, with frequent eruptions for the past 400 years. There was a major eruption in 1944.

WHAT WAS FOUND IN 1748?
Spanish military engineer Rocque Joaquin de Alcubierre and his team stumbled across the buried Roman city of Herculaneum when they were travelling around surveying and protecting the property of Spanish King Charles III. After excavating this city, they began looking for Pompeii, which they discovered on April 1, 1748.

Before Rocque Joaquin de Alcubierre’s work at Pompeii, people only explored ancient sites to see what treasures they could take home with them. At Pompeii, he was interested in the people, everyday objects and buildings and how people lived. Though some people continued stealing artefacts from Pompeii, his work changed archaeology forever.

The city has been continuously excavated for the 270-plus years since, with well-preserved human and animal remains, animals, paintings and buildings uncovered. About one-third of the city is still to be excavated. Restorers work on the plaster casts of the bodies of 86 victims of the eruption of Vesuvius in 79AD. Picture: AFP

INTERESTING FINDS
The body of a child at the thermal* baths, crouching as though to shield itself from the dangers of the eruption.

Hundreds of private homes, from luxury villas with gardens, banquet* halls, school rooms and baths, to small houses lived in by poorer people. 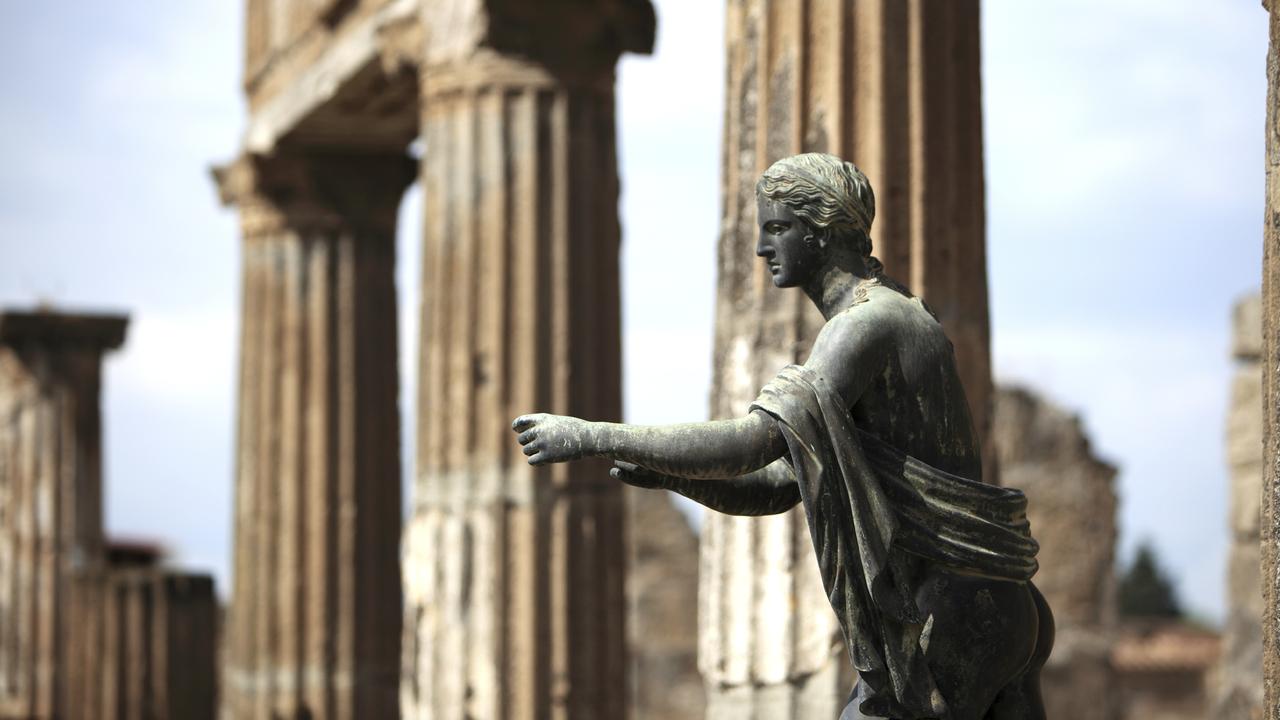 Shops, workshops and factories for everything from milling grain, cleaning wool and making bread, wine and fish sauce.

Small carved figures that could have been jewellery or good luck charms.

This is an edited version of a story first published on The Sun and republished with permission. Restorer Aldo Guido removing dirt from frescoes on the walls of the “House of Lovers” at Pompeii, Italy in February 2020. Picture: AFP 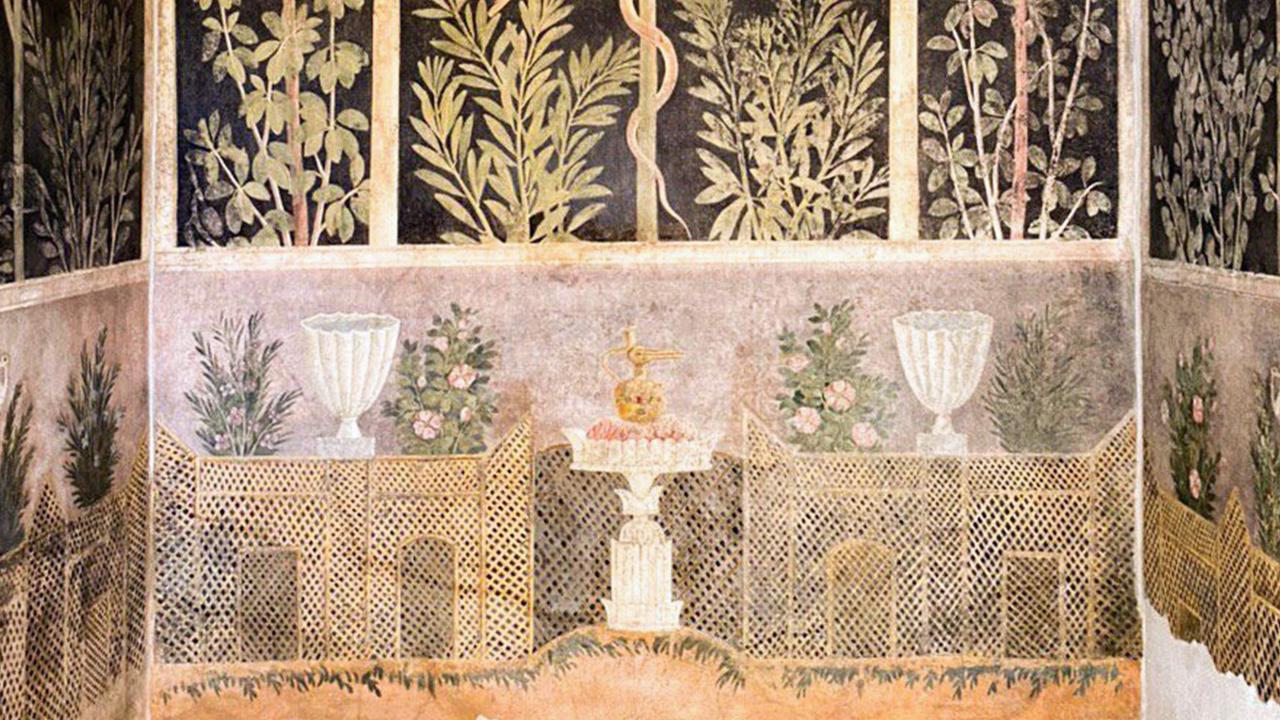 Frescoes on the walls of the grand “House of Orchards” in Pompeii, Italy. Picture: AFP

CLASSROOM ACTIVITIES
1. Y-Chart
Complete a Y-chart detailing what you might have seen, heard and felt if you were in the city of Pompeii when the volcano erupted and it was very quickly covered in ash. Complete a Y-chart detailing what you might have seen, heard or felt.

2. Extension
Why do you think Pompeii is now classified as a World Heritage Site? Why are the archaeological discoveries so significant to us today?

VCOP ACTIVITY
Headlines
Newspaper headlines are designed to gain the audience’s attention to make them want to read the article. They can be a play on words, were they used the words in a different way to make them more interesting, more dramatic or humorous.

Create 3 news headlines for the repost from a neighbouring village about the volcano eruption and its effects on the city and citizens of Pompeii.

HAVE YOUR SAY: What would you like to excavate on an archaeological dig?
No one-word answers. Use full sentences to explain your thinking. No comments will be published until approved by editors.