The Pyramid Fields from Giza to Dahshur is on the UNESCO World Heritage List. Picture: iStock

The mystery of how Egypt’s giant pyramids were built could finally be solved with the chance discovery of the remains of ancient ramps and a clever pulley* system in a quarry from the same time.

The find by an Anglo-French team of archaeologists* means we now know how the builders could haul* stone blocks weighing several tonnes up slopes, and also that they could do so at a far steeper angle than believed possible. A drawing of how the steep ramp, poles and ropes could have helped the workers lift the huge blocks of stone.

To be able to use sleds to haul up stones weighing several tonnes, it was generally assumed* there would have to be an incline* of 10 per cent at most, meaning the ramps wouldn’t have been very steep and so would have stretched far into the desert.

A chance find at an alabaster* quarry* has shown that the ramps could instead have been a lot shorter and steeper. In this quarry, which formed part of a large industrial development dating from the same ­period as the pyramids, the ­archaeologists happened upon a ramp while removing rubble to ­record ancient inscriptions*. They were surprised to see it had an ­incline of 20 per cent.

Yannis Gourdon of the French Institute for Oriental Archaeology said: “The main goal was to investigate the inscriptions*. When we were working on that, we did some cleaning. We had to remove stones and debris* against walls to find the inscriptions.” The Great Pyramid of Giza (also known as the Pyramid of Khufu or the Pyramid of Cheops) is the oldest and largest of the three pyramids in the Giza pyramid complex bordering what is now El Giza, Egypt.

In doing so, the 3m-wide ramp took shape. As they excavated it further, they found there were steps either side and, even more significantly, holes that would have taken sturdy posts half a metre in diameter*. This suggested the ramp would have offered two ways of hauling stones. At the same time as teams of men pulled from above, others could have used the posts as pulleys to haul from below with a second set of ropes, doubling the pulling power.

Excitingly, from the inscriptions on the ramp, they could tell it was at least as old as the pharaoh* Cheops. “That means that when Cheops made the pyramid in Giza they had the technology to transport huge stones on the huge steep slopes,” Mr Gourdon said.

Roland Emmarch, of the University of Liverpool, UK, said that ­although they could not prove it, it was reasonable to assume this “double lashing system” would have been used in Giza too.

“They could pull both around the post and on the block — up and downwards,” he said. “It doubles the number of people who can haul on the blocks.”

Dr Emmarch said their excitement at the discovery was somewhat dampened* when they realised they were not the first modern-day historians to think of how it could be done — just the first to find evidence. 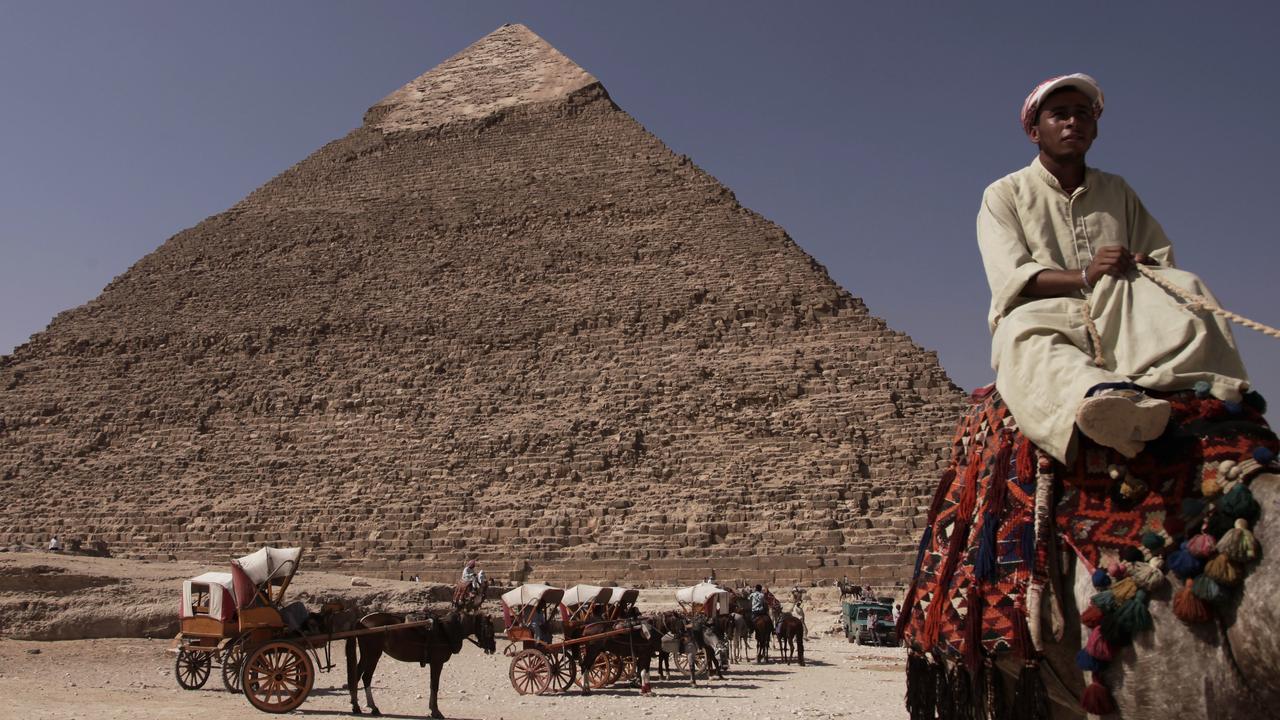 An Egyptian camel owner waits for customers to take a ride, in front of the Khafre pyramid, near Cairo, Egypt. Picture: AP

“There’s a 1950s Hollywood film called Land of the Pharaohs,” he said.

“There is a montage* of them building the pyramids. For a few seconds this contraption ­appears.” The filmmakers, he was amazed to see, had made the set using the same double lashing ­system.

This story was originally published in The Times and was reproduced with permission. 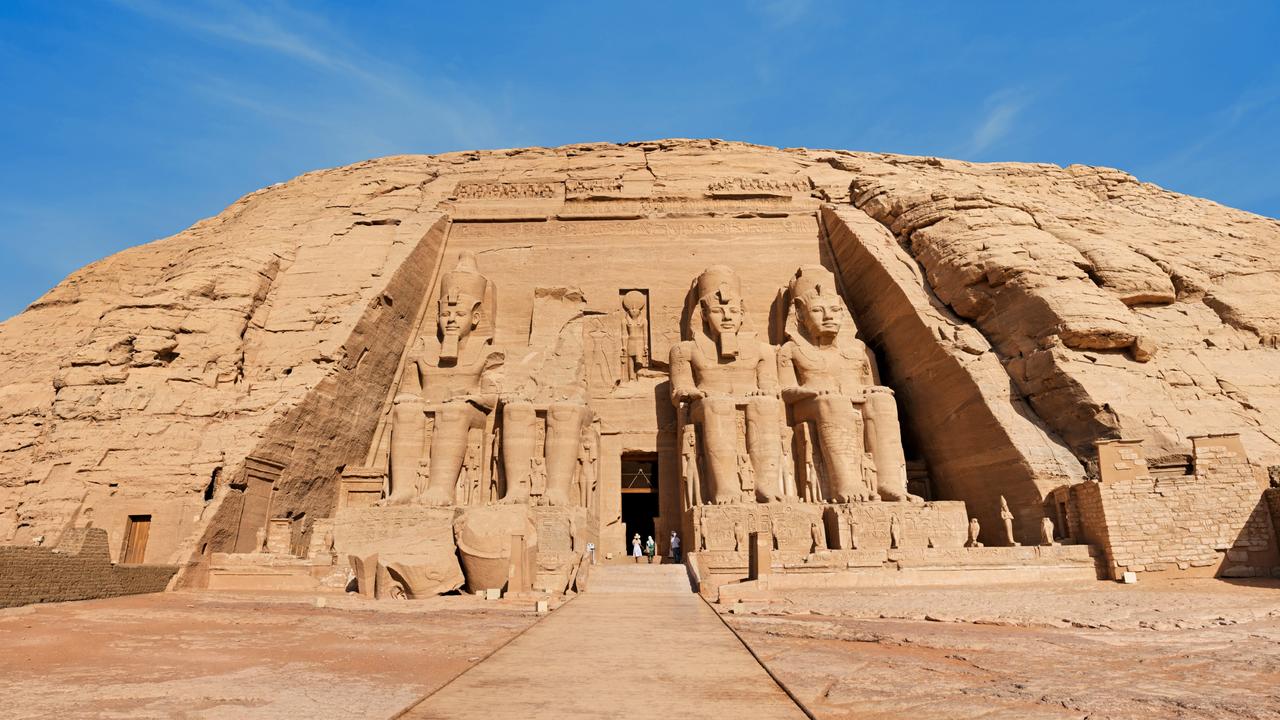 The 138m-high Great Pyramid — the tallest man-made structure for 3,800 years — is the only surviving landmark out of the Seven Wonders of the Ancient World.

The oldest known pyramids in Egypt are found at the Saqqara burial ground, northwest of Memphis.

Among these, the Pyramid of Djoser was the first to be built, having been completed in 2611BC after 19 years of construction work.

Pyramid building peaked around 2300BC, with the last pyramid built at some point between 1550-1292BC.

The pyramids were ordered by pharaohs, the kings of ancient Egyptian society, who would recruit high-ranking architects and engineers to manage their construction.

The backbreaking construction work was left to an army of slaves and skilled labourers.

Most of the pyramids were built as tombs.

They served as the final resting places of Egypt’s ancient kings, who showed off their status in life by being buried in enormous pyramid tombs in death.

pulley: wheel, axle or pole with a rope looped over it to help lift heavy things

diameter: width of a circle

montage: putting together some small bits to make one big thing

1. What would the ramps and pulley systems be used for?

2. What slope, or incline, did the quarry ramp have?

3. How wide was the ramp they found?

4. How wide, or what diameter, would the posts have been?

5. How many pyramids still remain in Egypt?

Imagine that you a reporter for Kids News. Your job is to interview the team of archaeologists that made this exciting discovery. You need to find out more about their finds and their jobs. Write at least five questions you would like to ask them.

Extension: As you can read in the story, we cannot know for certain if this was how all pyramids were built by the Ancient Egyptians. Think of another way that the Ancient Egyptians could have moved the massive stone blocks to build a pyramid. Create a plan and a diagram with labels.

HAVE YOUR SAY: What do you find most interesting about the pyramids? What would you like to know more about? Use full sentences. No one-word answers.