Ancient Egyptian mummy speaks up from the past 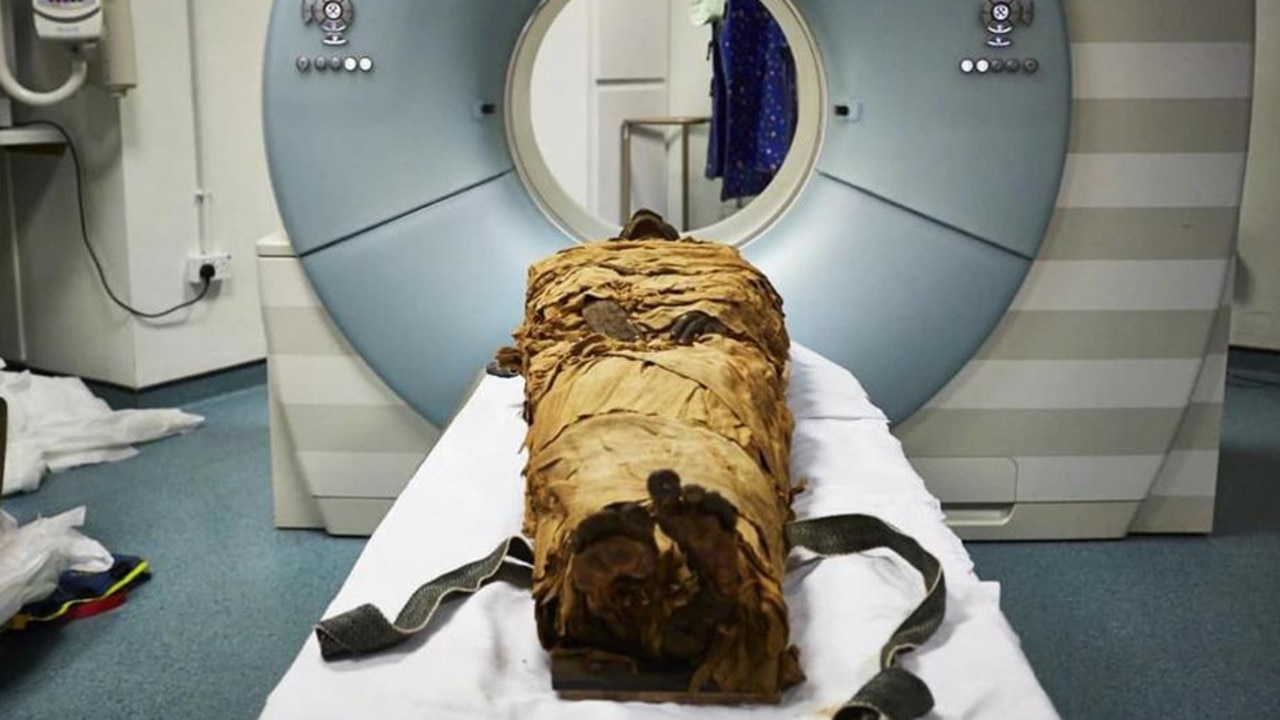 The mummified body of Nesyamun about to be scanned at Leeds General Infirmary, UK. Picture: Leeds Teaching Hospitals/Leeds Museums and Galleries/Scientific Reports

A 3000-year-old Egyptian mummy has spoken.

Scientists mimicked* its ancient voice by recreating some of the mummy’s vocal* tract* using medical scanners, 3D printing and an electronic larynx*.

They produced a single sound somewhere between the vowels in ‘bed’ and ‘bad’, according to research published in the journal Scientific Reports.

However, the noise is unlikely to sound exactly like the speech of Egyptian priest Nesyamun, whose mummified body the researchers worked with, because the tongue has lost much of its bulk over 3000 years.

“We have made a faithful* sound for his tract in its current position, but we would not expect an exact speech match given his tongue state,” said co-author David M. Howard of London’s Royal Holloway college, UK.

This would require the ability to work out the sound coming out of the vocal tract as its shape is being changed, which is not yet possible, even for living people.

“But this is something that is being worked on, so it will be possible one day,” said Howard.

Rudolf Hagen, an ear, nose and throat expert at the University Hospital in Wuerzburg, Germany, who wasn’t involved in the study, expressed scepticism*.

Even cutting-edge medicine struggles to give living people without a thorax* a “normal” voice, he said.

Co-author John Schofield, an archaeologist at the University of York, said the technique could be used to help people better understand history.

“When visitors encounter* the past, it is usually a visual* encounter,” said Schofield. “With this voice we can change that, and make the encounter more multidimensional*.”

“There is nothing more personal than someone’s voice, so we think that hearing a voice from so long ago will be an unforgettable experience, making heritage* places like Karnak, Nesyamun’s temple, come alive,” he said.

CLASSROOM ACTIVITIES
1. Have a bit of fun!
Jeopardy is a game in which the answers are given first and the contestants supply the questions.

Play Jeopardy with this mummy’s voice by writing at least 10 questions or statements that would evoke the response heard by the mummy.

Try to think of funny questions or statements. An example might be:

When you have finished share them with the class and try to find the most humorous question or statement.

2. Extension
If a Mummy was able to talk what would you want to know from it? Write a series of questions you would ask if you had the opportunity to interview a talking mummy.

What do you think an Egyptian mummy might like to ask you? Write some questions you think they would like to know about you and your life.

VCOP ACTIVITY
Mummy Talks Back
It might not be everyone’s idea of an exciting experience to have a 3000-year-old mummy speak, especially when it sounds like it’s calling you bad. Write a blurb or idea for a story about the mummy who came back to life.

Was your mummy asking to go back to bed, or was he calling you bad and you were in big trouble?

Remember it’s just a blurb or ideas, so you don’t need to write the whole story, just a teaser.

HAVE YOUR SAY: What person or animal’s voice from history would you recreate?
No one-word answers. Use full sentences to explain your thinking. No comments will be published until approved by editors.