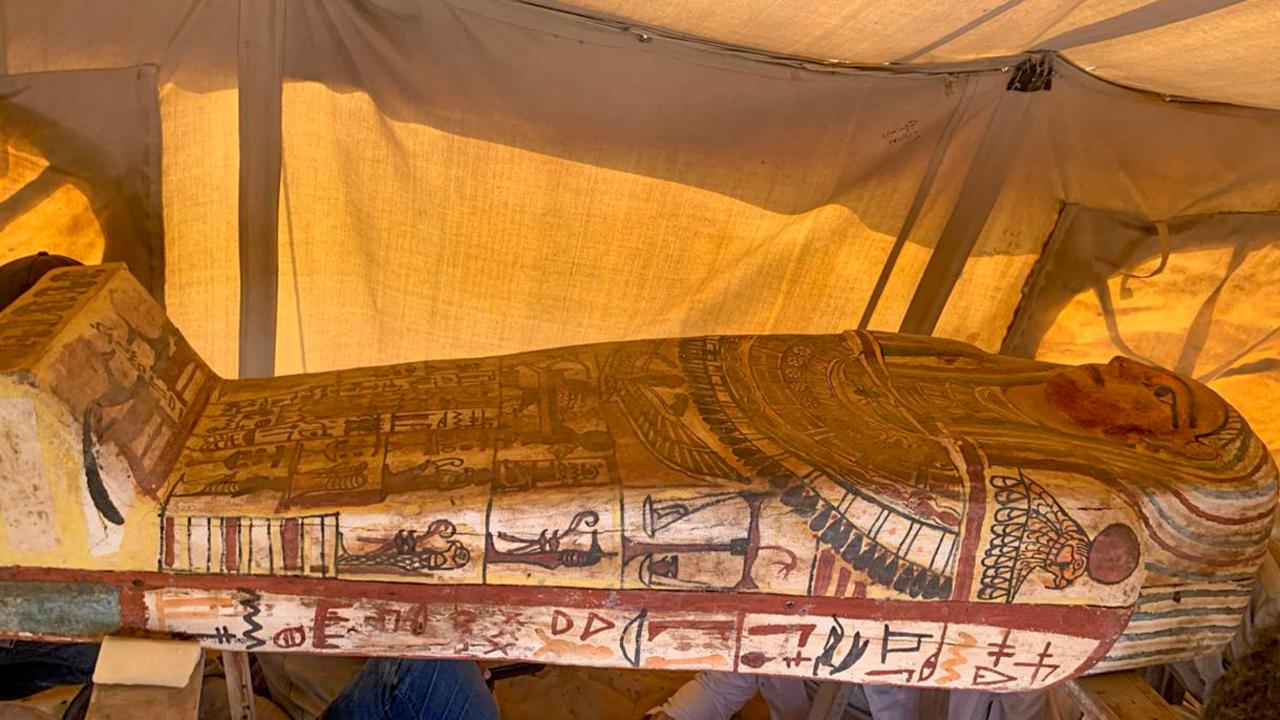 A 2500-year-old wooden coffin discovered in a burial shaft at the desert necropolis of Saqqara, Egypt. Picture: AFP/ HO/Egyptian Ministry of Antiquities

Archaeologists in Egypt have discovered 27 ancient coffins near one of the world’s oldest pyramids.

The wooden coffins are ornately* painted and covered in hieroglyphs* and have remained unopened since they were buried more than 2500 years ago.

They were found stacked in two burial shafts at the ancient necropolis* of Saqqara near the famed Step Pyramid of Djoser and have not yet been opened, the Ministry of Tourism and Antiquities said.

Neveine el-Arif, a spokeswomen for the ministry, said 13 coffins were found earlier this month in a newly discovered, 11m-deep well, and that 14 more were found last week in another well. Secretary General of the Supreme Council of Antiquities Mostafa Waziri (centre) inspecting one of the initial 13 coffins found in a burial shaft at Saqqara, Egypt. Picture: AFP/HO/Egyptian Ministry of Antiquities

Video shared by the ministry showed colourful coffins decorated with ancient Egyptian hieroglyphs, as well as other artefacts* the ministry said were found in the two wells.

There were once at least 11 pyramids on the Saqqara plateau*, including the Step Pyramid, along with hundreds of tombs of ancient officials, ranging from the 1st Dynasty (2920 BC -2770 BC) to the Coptic period (395-642).

Archaeologists were still working to understand more about the coffins, Ms el-Arif said, adding that more details and “secrets” would likely be announced next month.

In recent years, Egypt has heavily promoted new archaeological finds internationally in an effort to attract more tourists to the country.

Ms el-Arif said further excavations were underway in the necropolis, and more coffins were expected to be found. 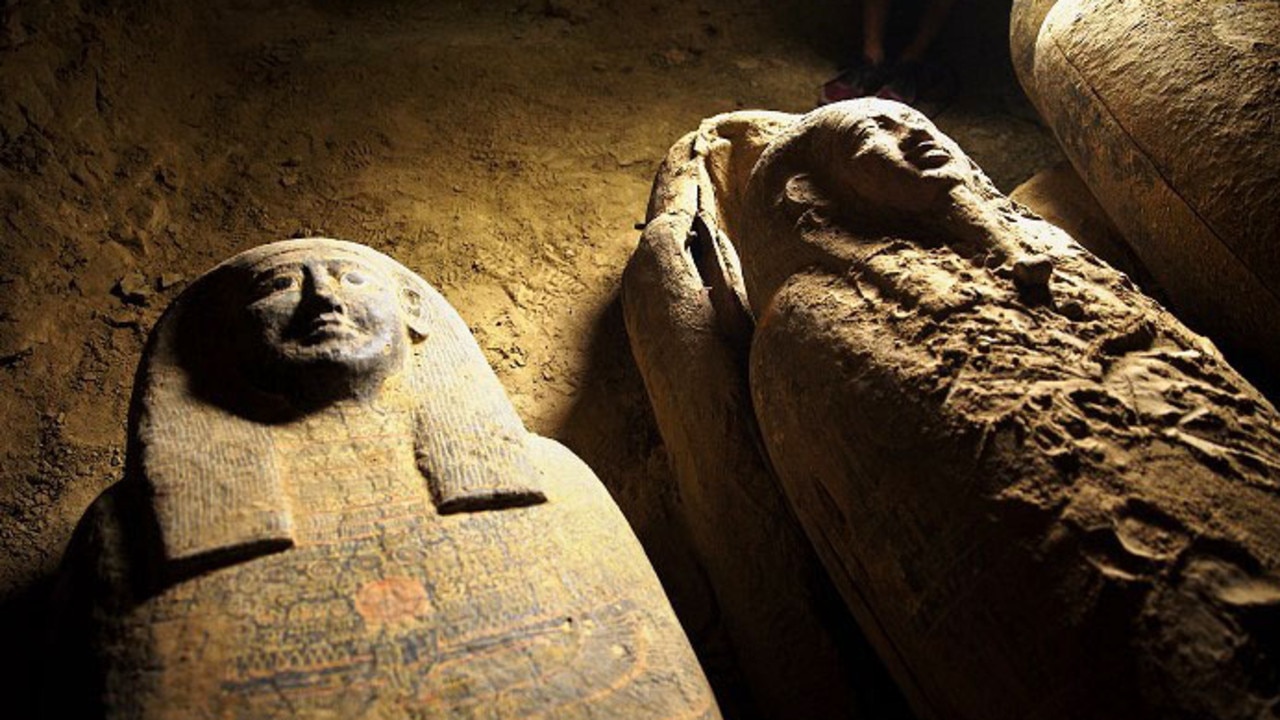 The Saqqara plateau is part of the necropolis of Egypt’s ancient city of Memphis, that also include the necropolises Abu Sir, Dahshur, the ancient pyramid site at Abu Ruwaysh and the famous Giza Pyramids. The ruins of Memphis were made a UNESCO World Heritage site in 1970s.

In October 2019, archaeologists unearthed 30 ancient wooden coffins with inscriptions* and paintings in the southern city of Luxor.

The Luxor coffins were moved to be showcased at the Grand Egyptian Museum, which Egypt is building near the Giza Pyramids. Stone carved with hieroglyphs found in the tomb of Pharaoh Tutankhamen in Egypt.

HIEROGLYPHS
Hieroglyphic writing is a system that uses characters in the form of pictures.

The individual characters or signs are called hieroglyphs. They can be read either as pictures, as symbols for pictures or as symbols for sounds (as with the English alphabet).

The word hieroglyphic is from the Greek word for “sacred carving”.

Although there have been other civilisations through history that have used picture signs as a form of writing, the term hieroglyphs really only refers to ancient Egyptian picture signs. Because hieroglyphs are complex, they were used only for carving on monuments.

The earliest known Egyptian examples are on burial-related pottery and labels for tombs from the 4th millennium BC, which means the year 4000BC to 3000BC, or 5000-6000 years ago.

There are no living languages that use hieroglyphs.

CLASSROOM ACTIVITIES
1. What Can We Learn?
Write a list of all of the different things that archaeologists can learn about the Ancient Egyptians from all of the things that were found at Saqqara.

HAVE YOUR SAY: Should the archaeologists open the coffins?
No one-word answers. Use full sentences to explain your thinking. No comments will be published until approved by editors.