People admire the newly restored Archipelagus Orientalis, one of the world’s rarest maps.

A rare 350-year-old map of Australia — believed to have been lost forever — has been discovered in an attic, restored and put on display at the National Library of Australia.

The 17th-century map, Archipelagus Orientalis (Eastern Archipelago), created by famous cartographer* Joan Blaeu in 1659 was uncovered in 2010 in Sweden.

The find is believed to be one of two known surviving copies of the Blaeu map. 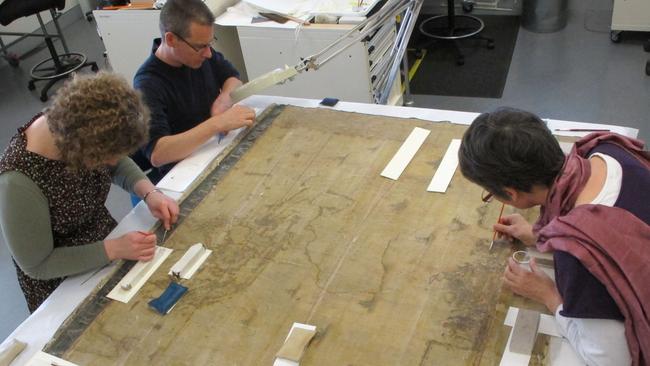 It is understood an antique bookseller went out of business in the 1950s and his collection of books and maps were stored in the attic for almost 60 years.
When the map was discovered again in 2010, the owners didn’t know they had uncovered a rare treasure.

“I think someone stumbled onto treasure,” Curator of Maps at the National Library of Australia Dr Martin Woods said.

After being carefully restored over several years, the map is now on display in the Library’s Treasures Gallery until mid next year. The western outline of Australia is clear on the map.

At the time of its creation the map showed what Europeans understood of Australia. James Cook had not yet landed on Australia’s east coast.

It was the first map to depict* Tasmania following the findings of Dutch explorer Abel Tasman during his expeditions in 1642-1643 and 1644. It also includes the first reporting of New Zealand. He returned on a second voyage in 1644, mapping the north coast of Australia.

Tasman gave Australia the name New Holland, which remained popular until the mid-1850s.

Imagine you were cleaning out an attic and came across a strange antique item.
Write a short narrative describing the item that you found, where it came from, how it came to be in this attic and what you decided to do with it.

Two famous explorers are mentioned in this article.
Choose either Abel Tasman or James Cook and do some research about them.

Write a short biography about their life and explorations.

On a blank map of Australia and surrounding countries mark the trips that Abel Tasman and James Cook made when exploring this part of the world.
Choose a different colour for each explorer and mark the dates of their trips.

Work with a partner to do a two minute brainstorm.

This article is full of proper nouns.  Can you find them all?
There are more than 10.
Classify them into names and places.