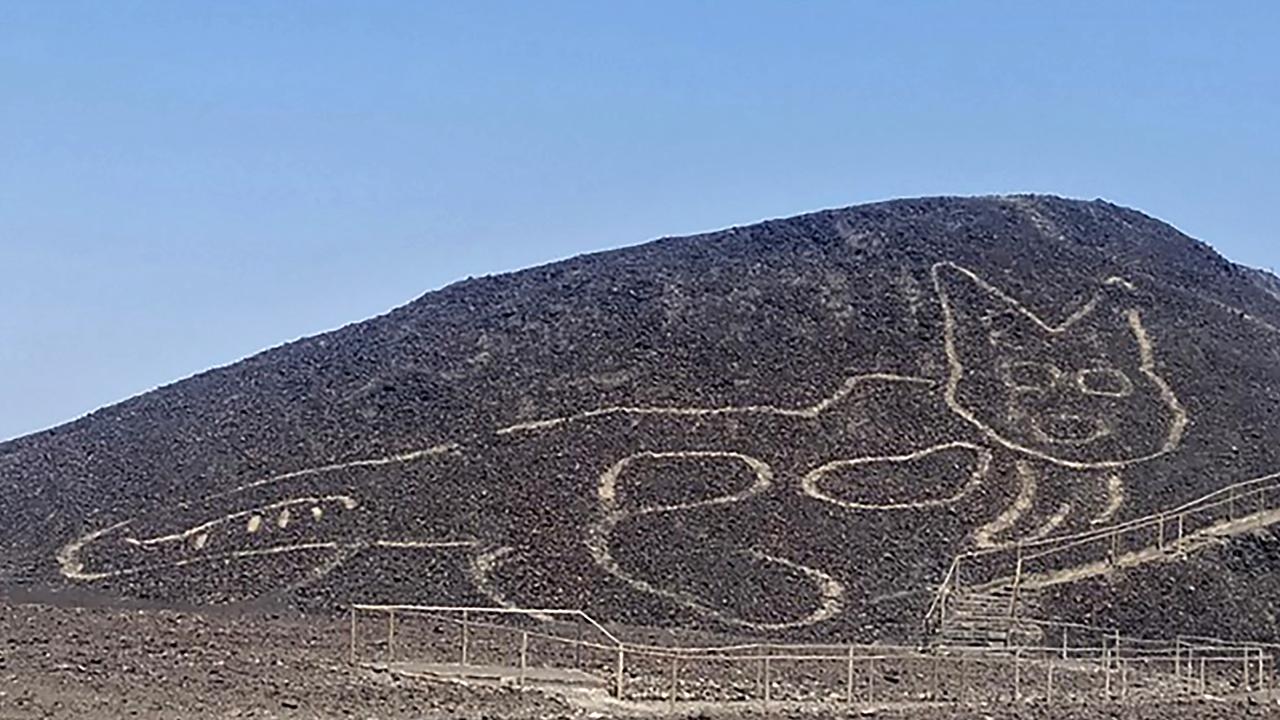 A giant cat figure etched into a slope at the UNESCO World Heritage Site in the desert near the town of Nazca in southern Peru. Picture: AFP/Peru’s Culture Ministry

A huge and ancient cat carving has been unearthed on a hillside in southern Peru.

The country’s Ministry of Culture is classing the 2000-year-old drawing as a Nazca Line that has gone undiscovered in modern times.

The Nazca Lines are a group of giant designs made in the desert soil in southern Peru. They are so big they can usually only be identified properly from the air. Around 1000 have been found.

It was discovered during maintenance work at a popular visitor viewing point, from which tourists view other Nazca Lines.

As workers started to clean and restore the area they noticed the carved lines and carefully uncovered them all until the cat figure was observed whole once more.

The Ministry said: “The figure was barely visible and was about to disappear as a result of its location on a fairly steep slope and the effects of natural erosion*.”

It added: “Representations of this type of feline* are frequently found in the iconography* of ceramics and textiles in the Paracas* society.”

They are a UNESCO World Heritage Site.

It’s believed they were created between 500BC and 500AD.

Many of the designs depict humans, animals (including a monkey, a hummingbird and a pelican) and plants but others are just mysterious shapes and patterns. 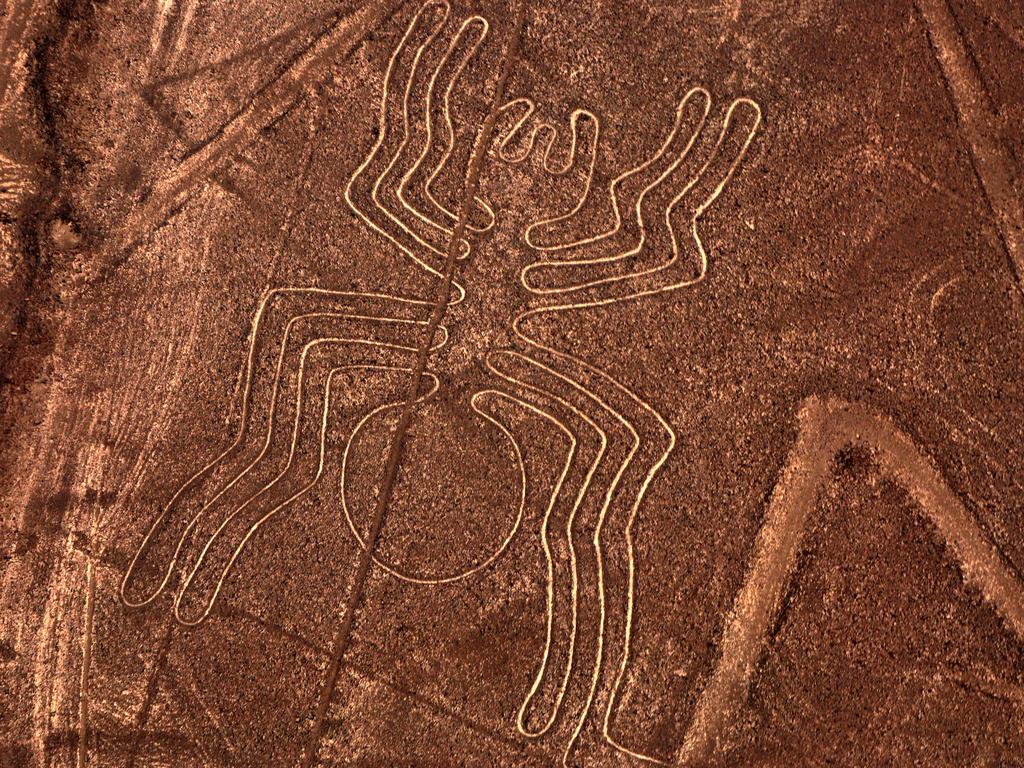 The spider geoglyph, one of the Nazca Lines. The figure is 46m long, and is one continuous line. Picture: Getty Images 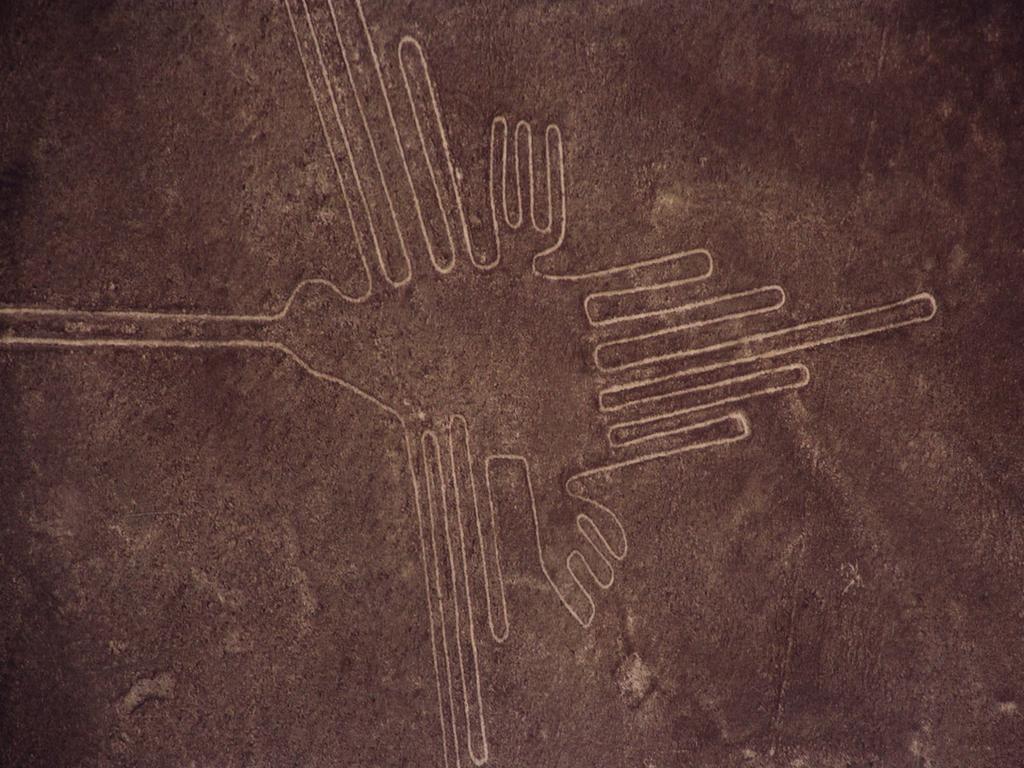 The hummingbird geoglyph, one of the Nazca Lines. Picture: Trevor Seymour

They typically measure anywhere from 320m to 1.1km across.

Each line or shallow trench is generally cut or hollowed out around 10cm to 15cm deep and around 30cm wide.

The purpose of the lines is a mystery, but some experts believe they may have served as messages to the gods by pre-Hispanic societies that created them.

It’s also possible they were used for astronomical purposes.

Astonishing monument found next to Stonehenge

CLASSROOM ACTIVITIES
1. Design Your Own Nazca Lines
Design your own Nazca Lines by carving on some clay or in sand or dirt outside. “Many of the designs depict humans, animals and plants but others are just mysterious shapes and patterns.”

Sketch your idea on paper, and then create a mini-version of it on a piece of clay, play-doh, or your class can go outside and create it in the sand or dirt.

Take pictures of the different carvings.

2. Extension
Discuss with a classmate what you think this cat carving depicts. Is it a particular type of cat? Is it a message to someone or something? What would you like to see done with this carving?

HAVE YOUR SAY: Why do you think the Nazca Lines were created?
No one-word answers. Use full sentences to explain your thinking. No comments will be published until approved by editors.