Trial to ‘switch off’ severe allergies in kids Jamie, 9, who is part of the trial to “switch off” egg allergy, is excited about one day being able to eat eggs. Picture: David Caird

Kids could “switch off” life-threatening egg allergies thanks to a treatment being trialled by Australian researchers in Melbourne.

The Murdoch Children’s Research Institute immunotherapy* program for egg allergies mirrors* the institute’s life-changing 2015 peanut trial. Children with peanut allergies were given a probiotic with peanut protein in increasing amounts over 18 months. (Probiotics are bacteria and yeasts that are good for you.)

Four years later, up to 80 per cent of children in the trial are able to safely eat peanuts.

“They are eating peanuts as if they don’t have a peanut allergy. We call it being in remission*,” lead researcher Professor Mimi Tang said.

“We’re now hoping to do the same for egg allergies. We are hoping to switch off the allergy. We don’t know if it’s going to work but it could be very exciting.”

“Egg is such a common ingredient and it’s in so many foods and kids have such a difficult time avoiding it,” she said.

Accidental eating or drinking of an allergen* is common, causing frequent and sometimes life-threatening reactions.

Antoinette Barallon’s daughter Sarah, 10, has a severe peanut allergy and was involved in the MCRI peanut trial. “She’s not cured but she eats peanuts regularly. It’s weird watching her eat nuts but she now has no problem with them,” Ms Barallon said.

Her son Jamie, 9, who has a severe egg allergy, will be part of the upcoming clinical trial. “We’re so used to it and our lifestyle is based around his allergy,” she said. “But it’s hard because egg is in such a lot of foods.”

She said it was “phenomenal* and groundbreaking* ­research that’s changed so many lives”.

“It’s not a cure but it’s a step closer to freedom.”

Ms Barallon said she wanted Jamie to “travel and eat out with friends when he is older without thinking twice about it”. 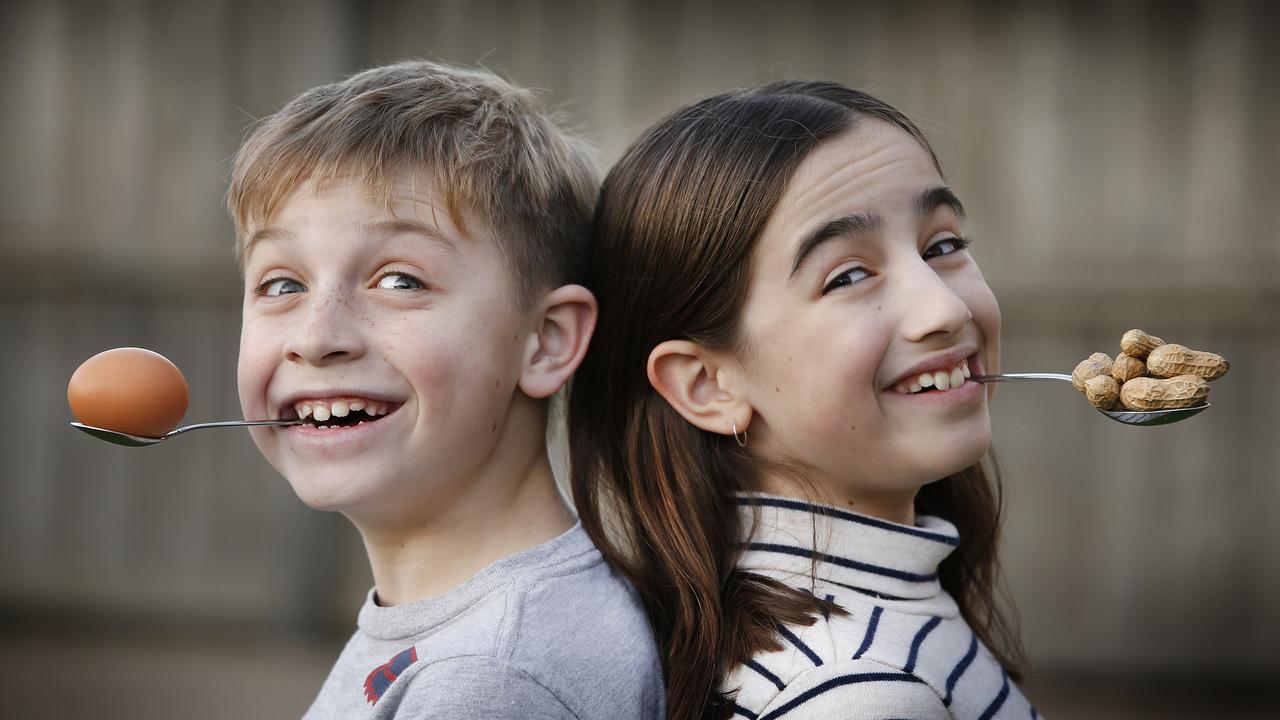 Jamie, 9, will be part of the upcoming egg allergy trial. His sister Sarah, 10, has overcome a peanut allergy by taking part in a similar trial. Picture: David Caird

Egg allergy is one of the most common food allergies in childhood, affecting almost 9 per cent of babies in Australia and up to 2.5 per cent of children worldwide.

Professor Tang said if they could “show that the probiotic food immunotherapy approach is effective in treating egg allergies as well, this will mean that we could perhaps extend treatment to other food allergies”.

This could include tree nuts such as almonds and pine nuts and milk.

Researchers need 80 children aged 5-17 with egg allergies to take part in the trial.

Hand washing: how does soap work?

Aussie-made food on the menu for astronauts

Think of a heading that will capture the attention of the target audience. Examples include; ‘We Need You!’, ‘Do eggs give you hives?’, ‘Allergies NO MORE!’ Make sure the writing is big and bold so it is easily seen. You need to capture their attention so they will read more about the trial.

2. Extension
People who suffer from allergies can react in many different ways – from mild rashes and hives to more severe and life-threatening reactions like anaphylaxis (difficulty breathing etc). Removing this problem could be life-changing for so many people.

However, it is critical that these types of trials that involve giving the allergen to a patient are conducted scientifically and under strict medical supervision to ensure reliability of the results and safety of participants.

Make a list reasons why medical trials need to be run under strict conditions before all people with allergies can be treated with probiotics. (Think of reasons that relate to safety and reliability of results)

VCOP ACTIVITY
I’m Free
Do you have an allergy or know someone that has? It can be quite restricting and you have to keep telling people you can’t have this or that, but that’s just your standard life.

How would you feel?

Write a paragraph explaining what you are allergic too, what it can do to your body, and how it would feel to be rid of the allergy.

If you are not allergic to anything, or don’t know someone that else, use our recent isolation experience of not being able to go to the park, and then restrictions lifting.

It’s not the same because you have an experience that was removed, unlike most allergy sufferers, but it’s something to reflect on.

Challenge: What do we mean by the isolation experience of no park play not being the same as an allergy? Why is it not the same?

HAVE YOUR SAY: Do you or anyone you know have severe allergies? How would life change if the allergy could be switched off?
No one-word answers. Use full sentences to explain your thinking. No comments will be published until approved by editors.