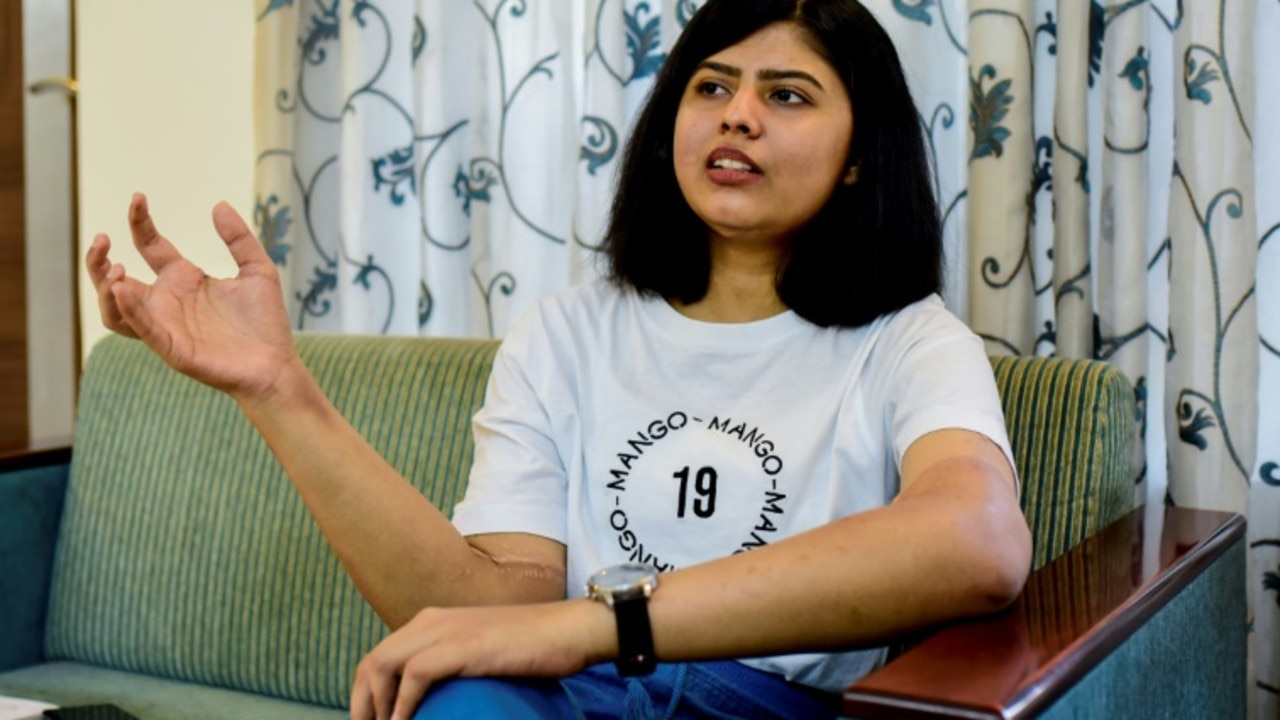 Shreya Siddanagowder gestures during an interview at her home in Pune, India, more than two years after she had both hands transplanted. Picture: AFP

A woman who received a double hand transplant from a male donor has found her new hands have transformed to be slimmer and lighter like her own skin tone, in an incredible development that has surprised and pleased doctors.

The transformation* is a bonus for amputee* Shreya Siddanagowder, who didn’t hesitate when she was offered new hands, even though they were larger, darker and hairier than her own and once belonged to a man.

“The donor was a tall man with big spindly fingers,” Siddanagowder’s mother Suma said from their home in Pune in western India.

“Now nobody can make out that they are a man’s hands … She has even started wearing jewellery and nail varnish.” Shreya Siddanagowder had both hands amputated after a bus accident, but had new limbs successfully transplanted. Picture: AFP

Siddanagowder’s life was turned upside down in 2016 when, aged 18, she was involved in a bus accident that crushed both her arms.

A delay in getting first-aid meant that both her hands had to be amputated* below the elbow.

Only 200 successful hand transplants have taken place worldwide — including nine in India — since the first in the US in 1999.

The first in India was conducted in 2015 at the Amrita Institute of Medical Science in the southern Indian state of Kerala, where Siddanagowder’s family took her.

The biggest problem was finding a donor. For cultural reasons, Indian families are often reluctant for the hands of their loved ones to be made available after their death.

“Usually you have to wait for a long time,” said Subramania Iyer, a member of a team of doctors that operated on Siddanagowder.

As a result, those seeking a transplant “are so desperate that they don’t mind if the hands are from a different gender”, said Iyer, a specialist in reconstructive* surgery.

Eventually, the hospital obtained a pair of hands in August 2017. Siddanagowder and her family accepted.

In a complex 13-hour operation, the donor hands were first attached by the bones before the tendons*, blood vessels* and skin were stitched together.

After the transplant, she had more than a year of physiotherapy* for her body and brain to get used to the new hands. Shreya Siddanagowder while she was still recovering from the transplant surgery. Picture: family photo via AFP

Iyer said that the colour of Siddanagowder’s hands quickly began to show “a lot of change”, but that it is difficult to pinpoint why.

“It could be because of MSH … a brain-controlled hormone* that stimulates melanin production. We are wondering if MSH levels can really influence the skin colour.”

Melanin is a natural pigment that gives skin, hair and eyes their colour.

Dr Shehla Agarwal, a leading dermatologist* in New Delhi, India, said that the absence of the hormone testosterone* explained why the hands became less hairy, and agreed that other hormonal changes might explain the change in colour.

But she also cited other possible factors.

“The donor male may have been exposed to more sunlight and physical activity compared to the woman,” Agarwal said. 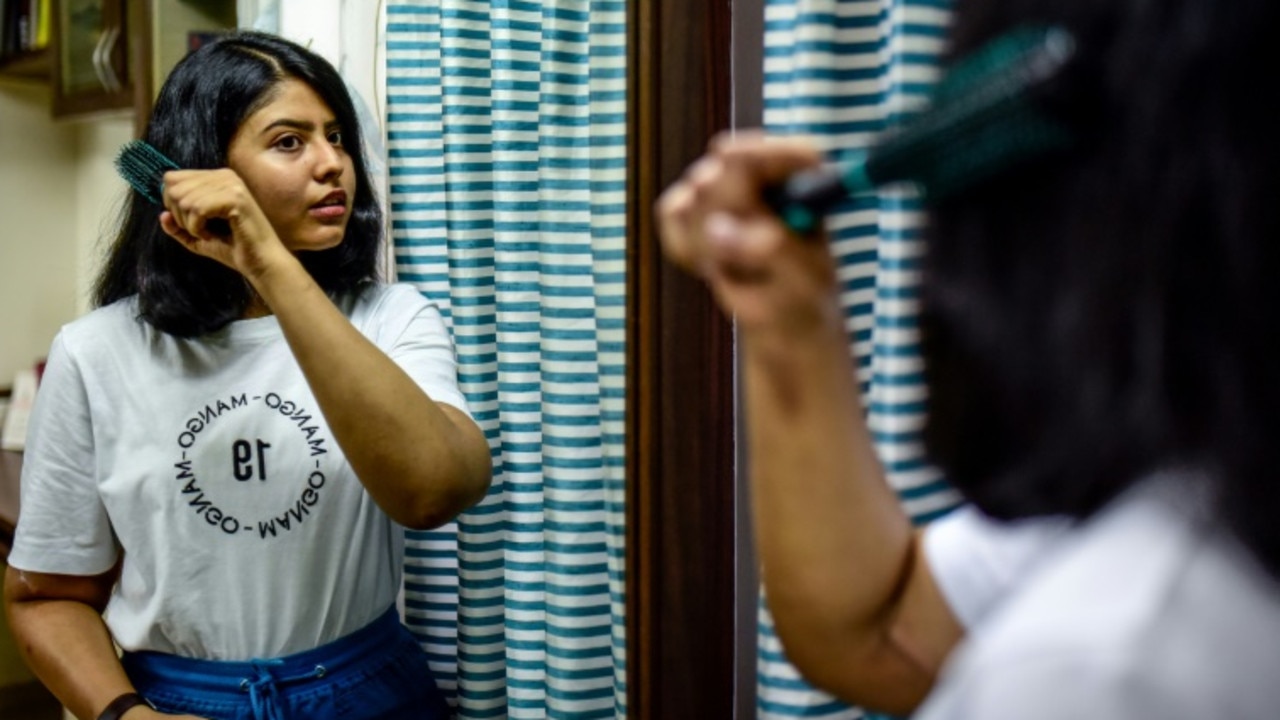 Tasks that are part of everyday life are now much easier. Picture: AFP

Siddanagowder is loving the transformation. She even wrote her recent college exam with her new hands.

Her doctors are pleased too.

“We all feel very happy for her,” said Iyer.

“The best moment was when she sent me a handwritten note on my birthday. I could not have asked for a better birthday gift.” 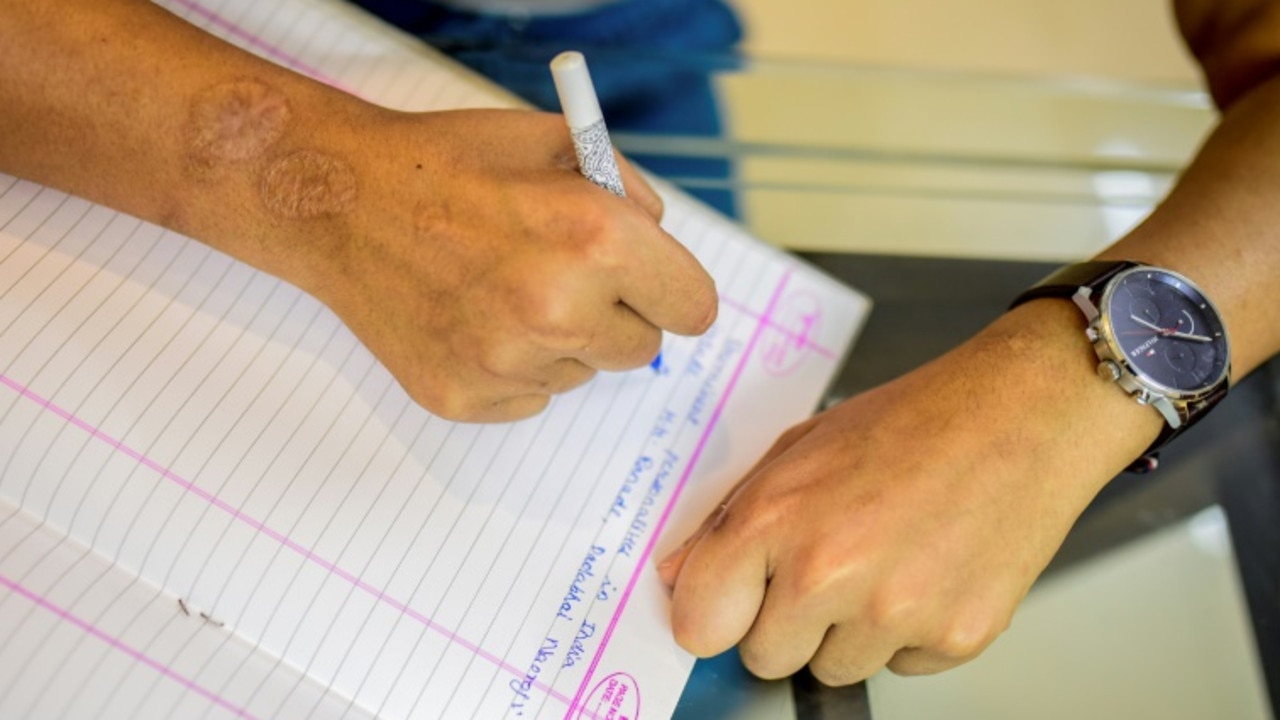 Life-changing day for man with 14 toes

CLASSROOM ACTIVITIES
1. Write a Letter
Although she would possibly be unable to send it for confidentiality reasons, write a letter from Shreya Siddanagowder to the family of the donor, thanking them for their generosity. Explain how she came to need a transplant, how their decision to donate has made a huge difference to her life and what she has gone through since the surgery and what she can do now that she couldn’t without the hand transplant. In your letter be respectful and understanding that they will have lost a family member.

2. Extension
Since losing her hands in an accident, Shreya Siddanagowder’s emotions would have taken a ‘rollercoaster’ ride.

Find five or six key moments in time for Shreya Siddanagowder since 2016 and list the emotions she may have felt at each time.

VCOP ACTIVITY
Punctuation Thief
Pick a paragraph from the article, or about three sentences together if that’s easier, and rewrite it without the punctuation. At the bottom of the page write a list of all the punctuation you stole and in the order you stole it. For example; C ,. C .

HAVE YOUR SAY: What was most interesting to you about the hand transplant story?
No one-word answers. Use full sentences to explain your thinking. No comments will be published until approved by editors.