Australian students are building prosthetic* hands for children around the world who have been injured by exploding landmines*. In the process, they’re discovering the fascinating world of engineering*.

The claw-like prosthetic is made from 30 complicated, detailed pieces of plastic and metal and takes about 45 minutes to put together.

The hands will be sent to India to help children and adults who have lost hands due to landmines, electrocution* or infection. Two weeks ago, it was trialled in a secondary school for the first time at Groves Christian College, also in Queensland.

Helping Hands is a social enterprise*, which means it is a business that operates to solve social problems* and help people. A charity* called Origin Foundation is organising the school trials for Helping Hands. Ruth Lee, manager of volunteering* at Origin Foundation, said she hoped the two Queensland schools would be the first of many.

“The students are assembling* something that will actually change a life,” she said.

“We’re running it nationally*. It’s only in Queensland so far but soon it will be in schools in Adelaide and Melbourne.”

Qualified engineers teach the workshops and the students learn about the bones and nerves and structure of the hand. “This is the first time we’ve partnered with Helping Hands and I can assure you it won’t be the last,” she said.

“It is so empowering* for the students to see they have made something that will go to someone to help them.”

Helping Hands estimates that there are 300,000 landmine-related amputees* in the world — 20 per cent are children. Dandenong Rotary have been getting great support from local business for there ‘building hands for landmine victims’ project. Businesses help assemble the prosthetic hands before they are sent across the world to victims of landmines. Picture: Jason Sammon Tuesday 8 March 2016

It is creative design and making.

Engineers use maths, science and other things we know about the world and then creatively think of solutions for problems.

WHO WILL WEAR THE PROSTHETIC HANDS?

– Children and adults in India who have lost a hand will receive the prosthetics the Mabel Park students made. These people may have lost their hand because they received a serious electric shock or had an infection and weren’t able to get antibiotics* or have it looked after properly by a nurse or doctor. They may also have been near or on a landmine when it exploded.

– Landmines are bombs buried in the ground during a war. They explode when someone or something steps or drives over them. Even when a war is over, there can be thousands of landmines still unexploded for many, many years. 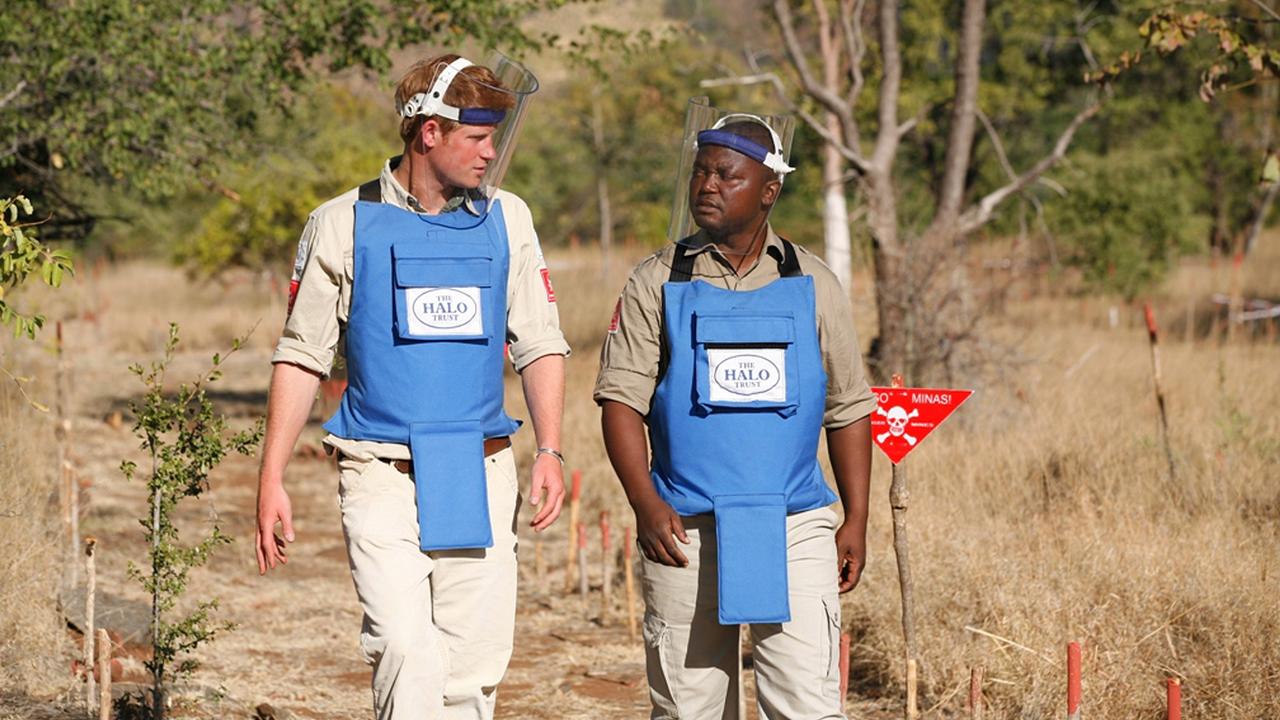 CAHORA BASSA, MOZAMBIQUE – JUNE 21: In this handout image provided by The HALO Trust, Prince Harry is seen with a deminer from The HALO Trust, a British charity dedicated to removal of landmines, on June 21, 2010 in Cahora Bassa, Mozambique. Prince Harry is following in his late mother’s footsteps, Princess Diana, who visited the same charity in Angola eight months before her death. Prince Harry spent two days with the charity learning the first stages of landmine clearance and detonated mines himself under supervision from deminers. (Handout Photo by The HALO Trust/Getty Images)

– It is a lot of work and costs a lot of money to clear an area of landmines and in poor countries, people sometimes have no choice but to farm and travel on land that hasn’t been cleared.

– One in five (20 per cent) landmine victims are children.

– There is a 1997 international agreement, called the Ottawa Treaty*, often called the Mine Ban Treaty, signed by more than 80 per cent of countries, that bans the use of landmines. TO GO WITH AFP STORY BY PETER MARTELL A Southern Sudanese female deminer clears grass and soil around a suspected landmine in the minefield of Bungu, in Central Equatoria state, south Sudan, on June 24, 2009. The all-female team, working for Norwegian People’s Aid (NPA), are helping clear the legacy of Sudan’s 22-year civil war. AFP PHOTO/PETER MARTELL

landmines: bombs buried in the ground

engineering: designing and making a solution to a problem

social problems: problems in society, affecting a lot of people, such as poverty or not having clean drinking water

charity: help and raise money for people in need

volunteering: giving your time without being paid

nationally: across the whole country

inspired: fill someone with the urge to do something great

empowering: make someone feel strong and able to achieve something

amputees: people who have lost an arm, leg, foot, hand or finger

1. How many pieces do the hands have and how long does it take to put them together?

2. Helping Hands is a social enterprise. What does that mean? Can you think of another example?

3. The students felt empowered. Why?

4. What does an engineer do?

The Helping Hands program is referred to as a social enterprise “which means it is a business that operates to solve social problems and help people”. With their goal to build 20,000 hands, they are potentially changing the lives of 20,000 people!

After reading the definition of engineering (which will also give you some ideas), work with a partner and brainstorm some other possible social enterprise projects.

Write a plan for a social enterprise you and your partner would like to develop. Your plan should include:

– who it would benefit

– why you believe it’s important

– who could help/assist with your project

If time permits, present your plan to the class and vote on the best social enterprise project plan in your class.

Extension: What do you think are some possible reasons that 20 per cent of landmine victims are children?

HAVE YOUR SAY: If you were an engineer, what would you like to design or build? Use full sentences. No one-word answers.